Click on the arrows in the bottom right-hand corner of the video to activate full-screen mode. 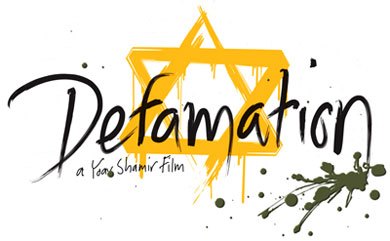 Yoav Shamir’s memorable, must-see Defamation is by turns hilarious, profound and disturbing. It recently aired on the UK’s Channel 4 True Stories series. Shamir seeks to investigate whether bona fide Judeophobia really exists to anything near the levels the ADL (Anti-Defamation League of Bnai Brith) claims to combat. This takes him to the US, Israel, Russia, Poland and to several interesting encounters and interviews. (See also the official film site synopsis).

We live with the feeling that death is always with us. Whether that feeling is good or not, I don’t know. It is always hanging over us, and here in Auschwitz you see how it became an industry, an industry of death. The Germans started it all and we are perpetuating it.

I thought a lot about whether this March of the Living is good or bad, this death industry…

We perpetuate death, and that’s why we will never become a normal people, because we emphasize death and what happened. We have to remember, no doubt, but we live too much in it, and it is preventing us from being normal people.
~ An Israeli assistant class teacher accompanying a party of Israeli teenagers on a March of the Living trip Poland.

There’s a kind of pathological narcissism, navel contemplation, when you are the richest, wealthiest, most successful ethnic group in the United States — you’ve got the world on a platter — and you sit around and you’re talking about anti-Semitism, it’s just kind of shameful I think.
~ Norman Finkelstein

In addition to the film’s mainstay shadowing of Abe Foxman to several locations, these interviews include Norman Finkelstein, John Mearsheimer, David Hirsch* and Uri Avnery. Then there’s the smart Rabbi Hecht who contends that Foxman propagates ‘anti Semitism’ “because he makes a living from it … he has to create a problem because he needs a job” (around 31 minute mark) and the couple who admit that the ADL provides them with a forum to explore Jewish identity (44 minute mark), or as Paul Woodward puts it in his excellent review at War in Context, If I Were Jewish, it shows how for many secular Jews, “the Holocaust now serves as a buttress against a loss of identity”.

What is most striking however is the active propagation of fear and threats inside Israel: the indoctrination of the teenagers is extraordinary. They are inculcated to see discrimination where none exists. What we see is the continued cultivation of a dangerously bellicose culture. More than this, the film points to the consequences of a chauvinist (and, though not explored here, supremacist) ideology in which ethnic campaigners like Foxman promote a Jewish identity around the notion of being always ethnically hated and defamed. The positive outcome is that Defamation challenges this notion, though it does so indirectly. It asks Jews to look to the future rather than to a highly selective, misleading and toxic representation of the past.

UA: I’m not so sure anymore. I don’t know who is serving who anymore. Do they serve us or do we serve them? … None of them fights anti-Semitism. They fight criticism of Israel. These are two totally different things. In America, hardly any anti-Semitism exists. If there was any anti-Semitism, the Lobby would not act the way it does. The phenomenon called anti-Semitism only exists in the Israeli media and in the minds of the Jewish big shots of the world who make a living fighting ‘anti-Semitism’. … The Jews in America never had it better.

YS: Are you saying anti-Semitism is an Israeli invention? A Jewish invention?

UA: Anti-Semitism today? All in all, yes. … In America, where Jews are so influential, they are scared of their own shadows. Every moment behind every tree, an anti-Semite hides. Bullshit. There’s nothing like that. … Anti-Semites? You’d need a magnifying glass to find them.

* Though David Hirsch is shown as speaking up for the Palestinians in Defamation, his political stance is rather more complicated than the brief snippet shown. Hirsch is actually quite active in the UK Israel lobby, running a campaign to discredit the growing Boycott, Divestment and Sanctions (BDS) movement. He was not pleased with the film, to which Shamir had a response.

At one point, Shamir talks to an Israeli high school student about her reaction to visiting Auschwitz, to which she reacts:

When you see it you say: ‘I want to kill the people who did this!’…

Who would I like to kill? All of them…

The Nazis, our enemies who did this.

YS: But you know they are dead…

Yes, but they have heirs, they may be different but they’re there.

In his review, Paul Woodward concludes:

Never forgive, never forget — an expression that has been turned into a mantra as though this is the only way of remembering and honoring the dead. In reality it has become a chain of anger, anchored to the past.

Ultimately the question of what it means to be Jewish is a question whose answer matters as much to the non-Jew as it does to the Jew.

If either believes that this identity is circumscribed by an unbridgeable divide then we will indeed have an unending conflict.

This entry was posted on 1 February, 2010 by Ann in Holocaust, Identity, Israel, Palestine, Video, Zionism and tagged Defamation.