A Christmas Reflection on Palestine by Sonja Karkar

Sonja Karkar is founder of Women for Palestine and her writing has been featured at Counterpunch, Electronic Intifada and many other good alternative press sites.

Christians and Muslims Weep Together
A Christmas Reflection on Palestine

As Christmas approaches this year, the thoughts of Christians all over the world will once again turn to Bethlehem, the holy town where Jesus was born over two millennia ago. Voices will be raised in joyful celebration and children everywhere will re-create the Christmas story to help us remember the circumstances in which the Christ child was born.

Such a momentous occasion in such humble surroundings heralded a new way of thinking about people’s relationship with God and with each other. It shook the foundations of an unforgiving society presided over by an unforgiving God and proclaimed peace and goodwill on earth amongst all people. There was indeed much to hope for.

However, the tranquil pastoral scene so familiar to us is not at all evident in Bethlehem today. Bethlehem does not lie still, and peace on earth and goodwill towards all is as elusive as ever. The tyranny of Israel’s occupation and its colonial expansionism is crippling the lives of both Palestinian Christians and Muslims alike. Yet, many Christians will again ignore the misery suffered by the Palestinians in the Holy Land and will celebrate Christmas without remembering that it was amongst this people and in their land that Jesus was born. Priests will chant, masses will be said, carols will be sung and nativity scenes will be created, but it is unlikely that many sermons will urge Christian congregations to speak out against the crimes being committed in Palestine.

Only recently, a delegation of eminent Australian Church leaders returned from visiting the Holy Land and reported their distress at “the suffering and fear experienced daily by large numbers of people.” [1] The report criticizes Israel’s military occupation for the “systematic harassment, physical and psychological oppression, widespread unemployment, poverty, and economic deprivation” [2] of both Palestinian Christians and Muslims. No doubt these church leaders will encourage their ministries to spread the word before the momentum is lost, but there are many forces working against justice for the Palestinians. Their statement has already been criticized by the Israeli ambassador and they are likely to face objections not only from Jews who support a Zionist state in Israel, but also from Christian quarters.

A dangerous Christian ideology which endorses the rhetoric of Zionism and the conquest of all Palestine for Israel is making its presence felt in Australia. This Christian fervour for Israel has found expression in a revitalised Christian Zionism that began back in the sixteenth century [3] and is directed today against Islam and Muslims. In America particularly, it has misconstrued the messianic and apocalyptic legacy of the Christian faith and has replaced the Jewish and communist Anti-Christ of Christian Zionism’s earlier imaginings with an Islamic Anti-Christ. This Anti-Christ, it believes, will be defeated in Israel where all mankind will gather for the coming of the Messiah. That it should take place in Israel, given the numbers of the world’s populations, is an absurd notion even amongst the most devout. That the dispossession, degradation and humiliation of the Palestinians who have lived in this land for millennia, can be condoned on such a pretext is even more abhorrent and preposterous.

Unfortunately, the influence of this Christian Zionism is growing rapidly and threatens the thinking of a whole generation of mainstream Christians regardless of their denominations, including Christians in the Holy Land. Father Rafiq Khoury of the Latin Patriarchate of Jerusalem, gives a very disturbing account of Christian Zionism’s effect on religion and politics. [4] Where once Christians and Muslims shared common values and aspirations in Palestinian society, Christian Zionism has succeeded in fragmenting this already battered community as it struggles to withstand Israel’s punishing occupation. Amongst certain sections of this society, Christians and Muslims are now viewing each other with suspicion, and Christians in Palestine, like those abroad, are beginning to see Islam as the enemy. Needless to say, this has been enormously detrimental to the Palestine liberation movement. 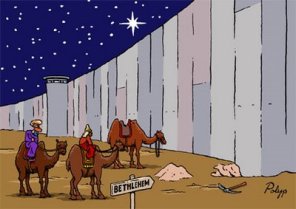 It would surprise many Christians in the West that Palestinian Christians and Muslims have prayed in Bethlehem’s Church of the Nativity for centuries. In fact, the Qur’an – the holy book of Islam – refers often, and with great reverence, to Jesus and Mary. Muhammad himself preserved an icon of Mary and the child Jesus after the conquest of Mecca and ordered that it remain within the Ka’ba to which Muslims make their obligatory pilgrimage from all over the world. [5]

Since 638 CE, Muslims have had the right to pray in the south aisle of the church when the Patriarch of Jerusalem handed over Palestine to Caliph Omar as he swept into Bethlehem with his Arab armies. [6] Muslims recognise Jesus as the Christ, the mightiest Messenger of God who was born miraculously of the Virgin Mary and who, through God, was able to perform miracles. However, Christians and Muslims part ways on Christ’s divinity. Muslims believe that there has always been and continues to be one God only and that joining Christ and the Holy Spirit with God the Father in what is known as the Trinity ­ a major tenet of Christianity ­ compromises that singular divinity of God.

It has not though affected their recognition of, and reverence for, Jesus and Mary. The highly regarded theologian of the early Christian Church, St John of Damascus actually thought that Islam was merely another form of Christianity [7], and indeed today, St John would probably be more comfortable with the practices and beliefs of Muslims than he would with the form of Christianity that has developed in the West, particularly Christian Zionism.

So much of the fear and antagonism we see today against Muslims come from ignorance. In Palestine, Christian and Muslims have lived together in harmony for centuries, and particularly in Bethlehem, they have not only shared Christmas celebrations, but even the Muslim feasts Eid al-Fitr at the end of the Ramadan fast and Eid al-Adha. As one young Bethlehem tour guide commented in 2002:

“We know how to celebrate together, because we know how to weep together. We have suffered as one people under 35 years of occupation. The same week that Mary, a Muslim mother of seven was killed in Beit Jala, Johnny, a 17-year-old, died in Manger Square as he was coming out of the Church of the Nativity, both shot by Israeli snipers. We’re all inmates together, Muslims and Christians, in the same miserable prison called Palestine. We have no freedom, no peace, no jobs, no money for winter heating, no travelling to Jerusalem or between towns and villages, no future.”

And that is the sum of what is so often forgotten in the search for peace and justice: the escalating inhuman situation suffered by the Palestinians ­ Christians and Muslims.

Sing as we might this Christmas, the hopes and dreams of all the years is unlikely to be met in Bethlehem for those who live there. Nor are they likely to be met for the Palestinians barely hanging on to their miserable existence in Gaza, or the Palestinians in the other cities, towns and villages in the Holy Land and even less for the stateless Palestinians long deprived of hope in the refugee camps. Every chorister’s hallelujah will just be a death knell for another generation of Palestinians and every Christmas reflection will become meaningless words of Christian faith, unless we are prepared to look beyond the tinsel and the feasting and really do something to stop Israel’s crimes against both Christians and Muslims in Palestine.

Sonja Karkar is the founder and president of Women for Palestine in Melbourne, Australia. See www.womenforpalestine.com

[5] Uri Rubin, “The Ka’ba: Aspects of its Ritual Function and Position in Pre-Islamic and Early Islamic Times”, Jerusalem Studies in Arabic and Islam 8 (1986) 97-131

9 comments on “A Christmas Reflection on Palestine by Sonja Karkar”