Hiding behind civilians: The continued use of Palestinian civilians as human shields by the Israeli Occupation Forces 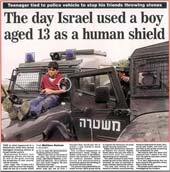 The Al Mezan Center for Human Rights has released an important update to its July 2008 report on the IOF practise of hiding behind Palestinian human shields. The use of civilian human shields is customary Israeli practice in gross violation of international law, in which the practice is a war crime and crime against humanity, as well as a violation of Israel’s own High Court ruling of 2005, which itself came after a three-year legal battle. The pretence extends then to the illusion of israeli rule of its own law.

The Al Mezan report also takes the international community to task for its “continued failure … to fulfill its obligations and its silence on Israeli violations [which] encourages Israel to proceed with its crimes.”

“They handcuffed and blindfolded me. Then, they forced us to move out of the room, pushing me with their hands and guns to move although I was blindfolded and pregnant. I heard them pushing others to hurry up as well. I got exhausted and I fell down many times…I told them that I was four months pregnant and couldn’t continue but a soldier threatened to shoot me…”

Perhaps ultimately, this Al Mezan report attests to the futility of seeking protection for Palestinians through the Israeli legal system. In 2005, after a three-year legal battle waged by Palestinian and Israeli human rights organizations, the Israeli High Court finally banned the Israeli Occupation Forces’ (IOF) systematic practice of using Palestinian civilians, including women and children, as human shields. However, as the witness testimonies in this report demonstrate, and in clear contravention of international humanitarian law, this cruel and sometimes lethal practice continues with immunity in the occupied Palestinian territories (oPt), with tragic consequences for its victims.

Section I of the report presents the position of international human rights law (IHRL) and international humanitarian law (IHL) on the use of civilians as human shields. It affirms that given the extent of the risk involved in this practice, using civilians as human shields constitutes a gross violation of the norms of IHL, particularly the Fourth Geneva Convention, and is tantamount to the perpetration of war crimes and crimes against humanity. This section also describes the legal battle fought by human rights organizations to ban this practice under Israeli law, and highlights the IOF response to this ruling which demonstrates clearly that the use of human shields is a systematic IOF policy.

Section II provides an overview of the use of Palestinians as human shields by the IOF since the second Intifada (which started in September 2000) and demonstrates that despite the 2005 Israeli High Court prohibition, this practice continues on a widespread basis in the oPt. It also explains the different forms of this practice used by the IOF in the oPt.

Section III presents a series of case studies from Gaza based on sworn witness testimonies. In one incident, a pregnant woman was blindfolded and forced to accompany IOF soldiers for several hours. In another incident an 11-year-old girl was shot in the stomach after being ordered by Israeli soldiers to go to the home of a relative and instruct him to leave his house. Other case studies record the use of a 14-year-old boy, medical personnel and families at home as human shields.

Section IV reminds the international community of their legal obligation to act and calls for immediate and effective action to halt this practice before more innocent lives are destroyed.

8 comments on “Hiding behind civilians: The continued use of Palestinian civilians as human shields by the Israeli Occupation Forces”