The Israel Lobby Revisited: A Year Since Walt and Mearsheimer’s Paper 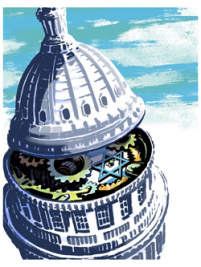 There are not too many academic papers that manage to make a splash in the policy world as well as academe. John Mearsheimer and Stephen Walt’s paper on the role of the The Israel Lobby has been one of them, and only President Carter’s book that followed has attracted anything near the firestorm of much needed debate on unqualified US government backing of Israel.

It was a year ago this month that the London Review of Books published this landmark essay. A longer version had been submitted as a working paper with the title The Israel Lobby and U.S. Foreign Policy at Harvard’s Kennedy School of Government on 13th March 2006. The Atlantic Monthly had commissioned an article by the authors in 2002, but decided not to go ahead with publication. It was a hot topic.

The paper argued that US Middle East policy is not in America’s national interest and is driven primarily by the “Israel Lobby”, a loose coalition of individuals and organizations who actively work to skew US foreign policy toward a hardliner Israeli Likudnik direction.

Yes, Virginia, there is a well-organised and prominent Israel Lobby and it is not anti-Semitic to note this fact nor to make it a legitimate topic of scholarly debate. The study generated much needed discussion and scrutiny, and elicited, unsurprisingly, the expected denunciations from the primary apologists for Israel in the US such as Alan Dershowitz.

The authors (from the broadly ‘realist’ school of international relations) posited that “the United States has been willing to set aside its own security in order to advance the interests of another state” and that of the myriad groups that make up this influential lobby, “(t)he bottom line is that AIPAC, which is a de facto agent for a foreign government, has a stranglehold on the U.S. Congress.”

In the year since its publication, the Republican majority in the US Congress has been overturned in the November elections, and the US Democratic Party have been able to reclaim majorities in both houses. With the current crop of Democrats, this is the most pro-Israel Congress ever.

And while the focus of the world was on the US for these November mid-term elections, this almost certainly was used as the cover for a terrible event, an unconscionable massacre by the IDF at Beit Hanoun in Gaza.

The guns were still smoking from the horrific invasion of Lebanon in July and the senseless month-long bombing of its civilian infrastructure. The Israeli government’s long planned for war on Hezbollah in southern Lebanon became a war on the whole country, causing an ecologically ruinous oil spill, threatening the culturally significant heritage sites of ancient Phoenicia and causing a second atrocity at Qana (biblically, the place where Jesus performed his water into wine miracle), in turn coming after prior strikes on Gaza. Lest we forget that 90% of the more than a million cluster bombs were dropped just in the last 72 hours of the conflict by the IDF—when a ceasefire was known to be imminent.

Despite arousing much of the world’s condemnation, the chorus of disapproval and disgust was simply ignored with the imprimatur of US government support. Wholly justified criticism has all too often simply been branded as either anti-semitic (as Walt, Mearsheimer and many others attest) or as “supporting terror.”

With a war opening on multiple fronts with its neighbors, and exempting the small but vocal peace movement in the country, Israel’s heart of darkness has revealed a bellicose collective mood. Fear, fervour and paranoia (when its citizens weren’t simply oblivious) have all too easily been generated by a state ideology predicated upon the racist supremacist ideology of militant Zionism which has seen Israel become a regional bully, and a nuclear-armed one at that. It is Israel that has not been a genuine partner for peace, gaining more territory under the cover of war and refusing to define its borders. Policies of ethnic cleansing/”transfer”, racism and resource entitlement have clearly been the order of the day.

The year since the publication of Walt and Mearsheimer’s paper has seen the Israeli government continue its punitive punishment, illegal settlements, urbicide, ghettoisation, apartheid and occupation under a myth of ‘disengagement’, all so far underpinned with assured US support for its long-time policies of genocide and ethnic cleansing in the Occupied Palestinian Territories (oPt).

Since then, too, the Likud-Zionist influence has been seen in neocon US foreign policy toward Iran, threatening a possible conflagration that the Israel Lobby has again long been shrilly propagating, as it did with Iraq. This threatens to ignite the entire region.

But cracks are emerging in the influence of the Israel Lobby. Other Jewish groups are making a noise on both sides of the Atlantic and elsewhere, speaking up against the intimidation of groups like AIPAC who they say do not speak for them. Numerous international boycotts—cultural, academic and economic—have been urged, in addition to divestment campaigns.

Cracks in the Lobby fortress are also emerging with challenges in the prevailing directions of the governing elite. As James Petras argues, a split can be seen between what he calls the traditional economic empire builders (EEB) and the civilian militarists/ Zion-cons. At least one article has recently speculated about the possibly waning influence of the neocons.

As a good friend of mine involved in the campaign to end apartheid in South Africa has reminded me, it is just when things are at their worst and most unbearable, that a tipping point is often reached. This tipping point may come suddenly, but it is a spark that is made possible by, and generated in, the long electric struggle for justice.

About Walt and Mearsheimer

Stephen M. Walt is the Robert and Renee Belfer Professor of International Affairs at the Kennedy School of Government at Harvard. His most recent book is Taming

American Power: The Global Response to US Primacy.

John J. Mearsheimer is the Wendell Harrison Professor of Political Science at Chicago, and the author of The Tragedy of Great Power Politics.

The response to the article prompted the LRB to hold a debate in New York on 28 September around the question ‘The Israel lobby: does it have too much influence on American foreign policy?’ The panelists were Shlomo Ben-Ami, Martin Indyk, Tony Judt, Rashid Khalidi, John Mearsheimer and Dennis Ross, and the moderator was Anne-Marie Slaughter.

Recommended first ports of call is to first read the article if you haven’t already done so. Read it as it appeared in the London Review of Books (.pdf, 12pp), reprinted courtesy of the Goals for Americans Foundation or its online version either at LRB or the slightly longer working paper at Harvard’s Kennedy School of Government. Listening to or viewing the subsequent LRB debate in New York is also recommended.

The authors wrote a follow up article published after the war on Lebanon (thanks Fanonite) and a book is on the way. If the reception of the article is any indication, it portends a similar campaign and debate as that President Carter has courageously helped generate.

Further references and selected review articles on this important topic are appended.

In Their Own Words:

* Michael Neumann, The Israel Lobby and Beyond: Why the US May Be Acting Against Its Own Interests in the Middle East, Counterpunch, 4 April 2006

* Jeffrey Blankfort Interview, Signs of the Times, 21 Feb 2006 (in French at Voltaire.net)

** Justin Raimondo, Enough is Enough: People have had it up to here with the Lobby, AntiWar.com, 26 May 2006

* Kathleen and Bill Christison, The Power of the Israel Lobby: Its Origins and Growth, Counterpunch, 16 June 2006

* Stephen J. Sniegoski, Israel-lobby denial: The bankruptcy of the mainstream Left as illustrated by Stephen Zunes, The Last Ditch, 18 June 2006

* George Monbiot, The king of fairyland will never grasp the realities of the Middle East, The Guardian, 1 August 2006

* Jean Bricmont, The De-Zionization of the American Mind, Counterpunch, 12-13 August 2006

* Matthew Yglesias, Is There A Kosher Way to Criticize the Israel Lobby?, The American Prospect, 26 January 2007

18 comments on “The Israel Lobby Revisited: A Year Since Walt and Mearsheimer’s Paper”