Another two important articles by Gideon Levy, who, with Amira Hass, is a fine journalistic voice of conscience in the Israeli wilderness. One of the articles is reproduced below, the other is his ‘An enlightened occupier’ (17 Dec, Haaretz). May this terrible act not go unnoticed and may the family of this 14 year old boy find some comfort amid this appalling tragedy and cold blooded killing by a murderer in the IOF. Rest in peace, Jamil Jabaji, 14, of Nablus. 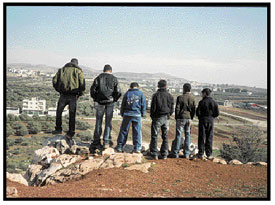 Children in the olive groves of Askar. Jabaji was not the only child killed at this site. (Miki Kratsman)

What is now going through the mind of the soldier who fired a loaded weapon at a boy on the Sunday before last – and killed him? What was he thinking when he aimed at the boy’s head? Is he still thinking about his victim? Why does live ammunition have to be used against children, even if they are throwing stones at a armored vehicles? Don’t the soldiers have other means of punishment? And what about the security cabinet’s decision to promote calm in the West Bank, too?

On December 3, after all, the security cabinet decided that arrests in the West Bank would henceforth be made only with the authorization of the GOC Central Command – but apparently, in order to fire at the head of a boy and kill him, no authorization is required. It’s enough to get out of the jeep, aim and fire. The Israel Defense Forces, we know, opposes a cease-fire in the West Bank, too.

Jamil Jabaji, 14, the “boy of the horses” from the Askar refugee camp in Nablus, had been throwing stones at an IDF Hummer making its way toward the camp, and a soldier killed him in cold blood. The vehicle was moving slowly, according to the children’s testimony, stopping every once in a while, in what the youngsters thought was a type of provocation, as though trying to lure them closer, until it stopped and two soldiers stepped out, aiming their weapons at them. No teargas, not even rubber-coated bullets. Live fire. A death sentence for stone-throwing.

Jamil liked horses, acted in the drama group of the local community center, took karate lessons, was the goalie of the children’s soccer team in the camp, and a member of the Boy Scouts. He was the tallest of the youngsters who stood on the cliff and threw stones at the jeep on the road below; maybe his height decreed his death. Maybe that’s why the soldier aimed specifically at his head. The one bullet that entered the forehead and exited at the back of the neck, spelled instant death.

The next day the children erected a memorial for Jamil – a small pile of stones and a floral wreath, with his photograph in the center – at the edge of the olive grove, not far from the horse ranch where his beloved steed, Musahar, is stabled. Precisely at the spot where he fell. Jamil is the third boy to be killed here in the past few years, between Askar and the settlement of Elon Moreh, which dominates the area from the ridge of a hill across the way.

The narrow alleys in the new Askar camp are now decorated with pictures of the slain boy. It’s cold in the Jabaji home and Grandma Askiya, swaddled in blankets, lies on her iron bed and spends all day staring at the photograph of her grandson, hanging on the opposite wall, wreathed in flowers. She is 78 and was born in Lod. Jamil was her youngest grandchild, the pampered baby of the family.

The father, Abed al-Karim, is not around. For most of his life he had worked in Eli’s sausage factory in Bnei Brak; now, when Israel has killed his son, he is out of the country and cannot afford to return to mourn for him. A few days before the tragedy he went to Jordan with his son Hamis, 19, who has a rare terminal disease. Hamis is due to have surgery in Jordan, and his father doesn’t have the money to return for the mourning period.

Wafiya, the bereaved mother, is wailing. She pulls Jamil’s schoolbag out from under her bed and hurls it furiously onto the floor. “Did they say he was ‘wanted’? He was afraid even to go to the outhouse in the yard by himself at night … I always had to go with him.”

A boy, Mohammed Masimi, enters the house, and the signs of shock are apparent in him as well. His face is frozen, he chews on his fingernails and stares vacantly. He was Jamil’s best friend. “I still don’t believe he is gone,” he mumbles softly.

The two grew up together from infancy in the camp’s alleys; together they went to the camp’s school a week ago Sunday, together they were in Grade 9, together they returned home at midday. Jamil told Mohammed that in the afternoon he would go to his drama group in the community center. Afterward Jamil asked his mother for a shekel, to buy a sandwich until lunch would be ready. He left and never returned. He probably bought the sandwich and then went to the horse ranch at the end of the alley, at the edge of the camp, to see Musahar. He went to see the horse every day, fed it sugar and brushed it. That Sunday he also went off to the ranch, until he and his friends noticed the army jeep coming down from Elon Moreh. About 10 children, most of them Jamil’s age, hurried to the nearby olive grove, under which passes the road that descends from the settlement toward the northern part of Nablus.

We now leave the house, too, following in Jamil’s last steps. In Mahmoud Adawi’s ranch the grayish horse is munching on hay. Five horses are locked in the skeleton of an empty truck; they are being trained for races. A few days before Jamil was killed, his Musahar won a competition in Jericho. Jamil never rode the animal – he was too heavy for a racehorse.

At the ranch we meet M. – a short, sweet boy with a chirpy voice, wearing a T-shirt that says Street Team – and A., a muscular kid of 15 whose hair is slicked down with gel, like most of the boys in the camp. M. and A. were among the boys who threw stones on that fatal Sunday. A.’s leg is scarred: In 2002 the IDF fired a shell at his home in the camp, killing four people, including his father and a boy of eight, and wounding him.

From the ranch we head for the olive grove. M. leads us, speaking in his childish voice. An autumn sun is shining. The grove is well tended, its soil tilled and strewn with rocks. The homes of Elon Moreh overhang the hill, the black road winds down from it. The road passes by the foot of the grove, but because of its steepness, it is visible only if one stands on the very edge of the nearby cliff, which is about 10 meters high. From here the road continues to the Wadi Bazan checkpoint, which separates Nablus and the Jenin area.

The children relate that they began to run along the cliff and threw stones at the Hummer; the road is still littered with them. The vehicle, they said, traveled slowly, stopping every few meters. They are convinced that this was done to make them throw more and more stones, and to come ever closer to the edge. The children fell into the trap. They spread out on the cliff, Jamil in the middle, busy throwing. And then the vehicle came to a full stop and two soldiers got out. They aimed their rifles and fired four bullets at the children.

Jamil was hit in the head and crumpled. The others ran for their lives in panic. Only M. and A. stayed behind, trying to drag their friend’s body. But Jamil was a heavy boy and with their small arms they were unable to move him, until Ali Abu Sanafa, who lives in the last house before the olive grove, arrived on the scene, and helped them evacuate the boy. Jamil was taken in a taxi to Nablus’ Rafidia Hospital, where he was pronounced dead. The children say that his brains had spilled onto his clothes.

Why did you throw stones, I ask the children from Askar. Little M. offers his shy smile and says nothing. A. says, “It’s a game.” Since the tragedy they have not dared come back here. It was here, too, that another boy, Oday Tantawi, 14, also fell; over there Bashar Zabara, who was 13, died. Both of them were killed in the olive grove, just meters from the makeshift memorial for Jamil. The owner of the ranch says that Jamil sometimes came by at six in the morning, before going to school, to feed his horse.

Jamil did not have a room of his own. He shared a double bed. There is no table in the house. On the wall hangs a certificate attesting that Jamil has achieved a yellow belt in Shotokan karate. His mother also shows his Boy Scouts certificate, with the image of a boy in a blue tie, light-blue shirt and blue beret.

In the camp’s community center a young volunteer from Sweden explains to a refugee girl where Africa is on the colored map on the wall. Jamil’s photograph has already been pasted on the glass door. The center’s director, Yusuf Abu Saraya, says that Jamil participated in most of the center’s activities, but liked the drama group especially. Here is his photograph, showing him standing on the stone stage in the well-kept playground, a gift from Europe, his face painted with war colors.

“We hope the army will not come to Askar anymore,” Abu Saraya says. “It is hard to prevent the children from throwing stones. There is no army base here, only a refugee camp. The olive grove is the only place where the children can leave the crowded camp and breathe fresh air. Jamil is not the first boy to be killed there.”

Abu Saraya adds: “The Israelis do not say they killed a boy. They say they killed someone who was endangering the soldiers’ lives. But what child can endanger the lives of soldiers? Sometimes they say the boy was armed – but what child can carry a rifle? What excuse do they have to come here at all? If you want to defend your country, do not come to Askar. From here you do not defend Tel Aviv. Askar does not endanger Tel Aviv.”

The IDF Spokesperson’s response: “At the behest of the military advocate general, an investigation has been launched by the military police into the circumstances surrounding this incident. At the culmination of this inquiry, the findings will be submitted to the advocate general’s office.”