This image has already received a good airing in the blogosphere; following on the heels of Cheney’s near-sensible statements back in 1994 about the lunacy of invading and occupying Iraq, I thought it might be worthwhile to air again in service of a timely reminder about another Orwellian neoconservative policy backflip, this time on Iran and its national ambitions to go nuclear.

(NB. A colleague informed me the other day that former governor of Hong Kong Chris Patten had wryly observed that the prefix “neo” before a word might as well mean “not” in these times, particularly as they pertain to the terrible twins neocon and neoliberal. That is, neocons are really not true conservatives at all, neoliberals are really not genuine small ‘l’ liberals in the classical sense. I agree). See also this collection of newspaper articles and advertisements from the 1970s that clearly indicates European and US support for the Iranian nuclear program. 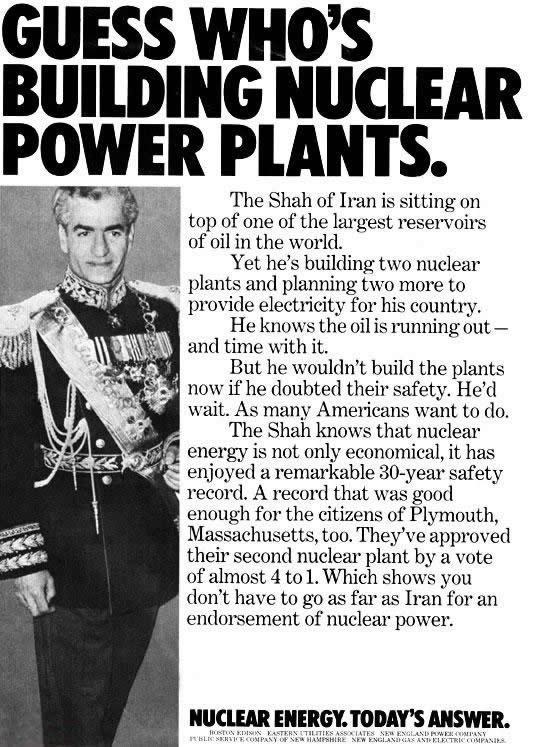 The above is an advertisement commissioned by US energy companies advocating nuclear energy for the US. It features the Shah of Iran Mohammad Reza Pahlavi, who was brought to power after 1953 after a CIA-supported coup ousted democratically-elected Prime Minister Mohammed Mossadegh. The Shah was in turn deposed with the 1979 Islamic Revolution.

The Iranian nuclear programme was launched with the active input of the US in the 1950s. Iran was urged to invest its oil profits in expensive US nuclear technology, on the rationale that Iran’s oil was a finite resource and going nuclear was an energy investment for the longer-term future.

In 1959, the Tehran Nuclear Research Centre (TNRC) was established, equipped with a U.S.-supplied, 5-megawatt nuclear research reactor which became operational in 1967. Iran (unlike Israel) signed the Nuclear Non-Proliferation Treaty (NPT) in 1968 and ratified it in 1970.

According to a recently declassified State Department memo [source], the Nixon administration sent the chairwoman of the US Atomic Energy Commission, Dixy Lee Ray, to Tehran in May 1974 to offer her agency’s services as a “clearinghouse” for Iranian investments. Two months earlier in March, the Shah had announced plans to build up to 23 reactors or nuclear power stations by the year 2000, with US collaboration. The plants would cover domestic energy needs and free up oil for export.

This policy continued into the Ford administration. A 1976 directive signed by President Ford involved a deal to sell the Iranian government a U.S. built reprocessing facility for plutonium extraction from nuclear reactor fuel. This deal significantly involved reactors powered by and regenerating fissile materials on a self-sustaining basis, in other words, it involved the complete nuclear fuel cycle.

At the time of the Ford administration’s support of the Shah’s nuclear programme, the White House Chief of Staff was none other than Dick Cheney. Donald Rumsfeld and Paul Wolfowitz were also office-holders in the Ford administration, all making the opposite argument to the one today as even the WaPo highlights.

This might invite the counterargument that the relations between the countries have dramatically changed and the strategic circumstances are now different. If they are different, it is more by ideological design and willful neglect on the part of the neocons than anything else ( the “wipe off the map” canard; Israeli Likudnik warpimping).

The George W Bush administration failed to enter into negotiations with Iran on its nuclear program in May 2003 because neo-conservatives who advocated destabilization and regime change were able to block any serious diplomatic engagement with Tehran, according to former administration officials. … Lawrence Wilkerson, then chief of staff to secretary of state Colin Powell, said the failure to adopt a formal Iran policy in 2002-03 was the result of obstruction by a “secret cabal” of neo-conservatives in the administration, led by Vice President Dick Cheney.

Of course, the fact that Iran has decided to collaborate with Russia and poses a threat not to Israel’s existence but to its regional and nuclear hegemony are also factors that weigh in. Nor am I unaware of the abuses of Iran’s theocracy; they, too, should be addressed, just like those of the current United States regime, but they are not in themselves causes for war.

Iran, it is worth repeating, has never threatened the US. Nor has it ever threatened Israel’s existence (the propagated myth of President Ahmadinejad’s purported “wipe of the map” comment is an acknowledged mistranslation; Iranian Jews also number in their tens of thousands in Iran and are proud Iranians happily residing there as a continuous community for hundreds of years.

In contrast, the Likudnik-steered Bush administration has repeatedly threatened Iran with nuclear first strikes. In 2002, the US Nuclear Posture Review envisioned the use of nuclear weapons on a first strike basis, even against non-nuclear armed states, in a policy of “offensive deterrence”. We recall that when questioned about the use of nuclear weapons against Iran, President Bush responded that “All options were on the table”.

I have but briefly sketched the contours here to accompany the image centrepiece; for further reading see here for a list of related available papers by the Oxford Research Group and here for a timeline of Iran’s nuclear program. I have also appended a table that compares contrasts Anglo-American and Iranian aggressive acts:

Also worth checking out — recommended:

4 comments on “Neocon Historical Revisionism Revisited: the Case of Iran”