Mark Braverman: ‘I think we Jews need to look in the mirror … and stop looking backwards’ 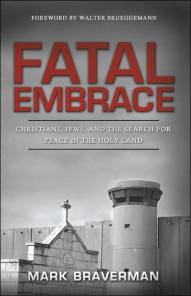 Mark Braverman draws upon his own journey as a US-raised Jew with a Jewish Palestinian family background and frankly — refreshingly! — talks about the connection between Jewish identity and Israeli occupation in this clip.  It was on a return trip to the Holy Land in 2006 that he describes being transformed in witnessing the occupation of Palestine, and by his encounters with peace activists and civil society leaders from all three Abrahamic faiths.

Notably, Braverman also argues that (European) Christian guilt for Jewish persecution is an obstacle in the resolution equation as well.  While I would agree with this, I think historical Jewish anti-Gentilism, religiously sanctioned, needs to be honestly examined too, as people like Israel Shahak have done. You can read the entirety of Shahak’s courageous volume Jewish History, Jewish Religion online.

To his credit, Braverman has touched on Jewish anti-Semitism (or anti-Gentilism) in his excellent 2007 essay, Answer to Rosenfeld: Jewish History, Anti-Semitism, and the Challenge of Zionism (originally published at Jewish Conscience).

This is becoming more urgent as the zionist entity increasingly becomes talmudistan or a semi-theocracy as Gideon Levy puts it, and the Judaism it draws upon is not exactly the Reform or non-exclusivist Orthodox variety, to put it mildly.

Trained as a clinical psychologist, Braverman now devotes himself full-time to working on the conflict through a variety of organisations –you can see more of his bio here. He is also the author of the forthcoming Fatal Embrace due out in February; see also his recent piece Rededicating the Temple – A Hanukah Homily.

Meanwhile, Palestinian Christians have just issued their liberation theology-inspired Kairos call for a boycott of Israel (following from their 2006 Jerusalem declaration on Christian zionism). A forthcoming documentary entitled God Is On Our Side also challenges the “Christian” zionist ideologues (trailer).

This entry was posted on 14 December, 2009 by Ann in Christianity, Israel, Judaism, Justice, Palestine, Video and tagged Mark Braverman.