UPDATE 1:  Paul Woodward applies a healthy dose of skepticism to these early reports. I’ve added his observations with his kind permission (see below).

UPDATE 3 (15 Dec): Maan News reports that the US army is installing a Gaza monitoring system along the border (also mentioned at the 19 minute mark by Jimmy Johnson on the video at this post re Egyptian engineers being trained in tunnel detection by the US on the border with Mexico) as phase one before a more uncertain phase two underground wall.

Just when you thought things could not become more Kafkaesque comes apparent confirmation that the US-backed Egyptian government is building an underground steel barrier designed to cut off one of the few lifelines sustaining the Gaza Ghetto, the tunnel economy. The BBC reports that the huge underground wall will be 10-11km (6-7 miles) long, will extend 18 metres below the surface and will take 18 months to complete. The project has been shrouded in secrecy with no official confirmation from the Egyptian government, but it is understood that the design is commissioned by US army engineers, at the behest of Israel, Ann Wright surmises.

The ‘impenetrable’ barrier is made of super-strength steel manufactured in the US, according to the BBC. It will likely not succeed in halting all smuggling but will force Palestinians to dig deeper.

Conditions are worsening in this nightmare siege. The Israeli regime has prevented EU officials from entering the besieged strip, Gaza’s water is contaminated and creating a public health disaster and the israeli blockade that prevents vital reconstruction continues unabated.

If this report is accurate, it would be a new low in the levels of inhumanity, absurdity and wretchedness to which the Israeli regime, with active Egyptian and US ZOG complicity, are subjecting the beleaguered Palestinians of Gaza.  Only a just political resolution will put an end to the tunnels.

Retired US Army Reserve Colonel and former diplomat Ann Wright rightly castigates this development and calls it a laughing stock:

America’s super technology will again be laughed at by the world, as young men dedicated to the survival of their people, will again outwit technology by digging deeper, and most likely penetrating the “impenetrable” in some novel, simple, low-tech way. 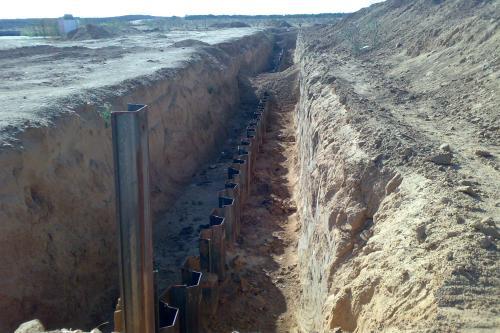 I’m a bit skeptical about this report. As an engineering feat I can’t see how 18-meter lengths of steel can be inserted into the ground without this being a highly visible (and audible) operation — large cranes, pneumatic hammers etc. The BBC report says:

For weeks local farmers have noticed more activity at the border where trees were being cut down, but very few of them were aware that a barrier was being built.

That is because the barrier, made of super-strength steel, has been hidden deep underground

Before this barrier can get hidden deep underground it has to get there from above ground.

The other thing that makes me skeptical is that I’m not at all sure that the Israelis have a big problem with the tunnels. The tunnels serve Israeli interests in multiple ways — as a propaganda tool (the means through which Hamas is rearmed and will thus need to be crushed at some point); as an adjunct to the siege (part of the drip-feed that maintains Gaza on a starvation diet with minimal expense to the Israelis); without the tunnels Israel would be forced to allow more materials through the borders and thus create the perception that it was relenting in enforcing the siege; the tunnels also provide an excuse for Israel to keep on bombing Gaza; and the fact that Hamas regulates and profits from the tunnel economy serves to undermine the organization’s political legitimacy. All in all, I’d say these add up to reasons why the Israelis would be quite happy keep the tunnel economy operating.

This entry was posted on 11 December, 2009 by Ann in Egypt, Gaza, Palestine, US Foreign Policy.