The Israel Defense Forces canceled a planned air raid on the home of a militant in the northern Gaza Strip on Sunday after several hundred Palestinians barricaded themselves inside the building, an IDF spokesman and witnesses said.

Palestinian sources called the protest the first of its kind to have in effect prevented an air strike by the IAF. An IDF spokesman said the strike had been called off so to avoid inflicting civilian casualties. [bad PR]

Hundreds of Palestinians formed a human shield around the home of the militant in Beit Lahia late Saturday to prevent an Israel Air Force air strike on the building, residents said. [NB its called civil resistance, and these courageous people perform these legitimate acts every day – no “hiding” behind civilians here]

An IDF spokesman confirmed the raid had been called off because of the protest.

“The attack plan was canceled because of the people there,” the spokesman said. “We differentiate between innocent people and terrorists.” [sure, all the events of the last sixty years have shown that claim to be true]

The spokesman vowed Israel would continue its strikes against militants, and accused gunmen of using the civilians in the camp as human shields. [we knew that old refrain was coming]

Earlier Saturday, two Palestinians, ages 16 and 20, were killed and five others wounded Saturday by Israel Defense Forces fire in Beit Lahiya. Three IDF soldiers were lightly injured by an anti-tank missile while operating against Qassam rocket infrastructure in Beit Lahia.

People flocked to the home of Mohammed al-Baroud after he received a warning from the army late Saturday giving him 30 minutes to leave the house. Barhoud is a commander in the Popular Resistance Committees in the town who is in charge of firing homemade rockets at Israel. Crowds of people stood on the rooftop and in the yard of the home. 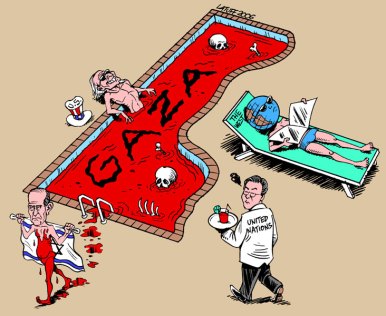