On Gaza: those who pull out the peoples eyes condemn them for being blind 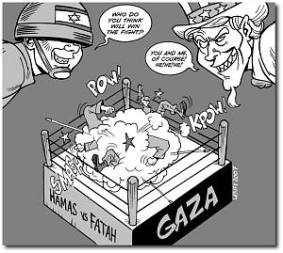 The astute Israeli journalist Amira Hass has long noted that the current troubles in Gaza are the calculated tactical products of Israeli and US neocon ‘divide and rule’. She and others such as Uri Avnery (see The Great Experiment) have rightly observed that this is a playing out of the truism that in situations such as this, ‘those who tear out the peoples eyes condemn them for being blind’, and then disingenuously point figures at the fighters in the ring as if to suggest they had no causal hand in staging the fight whatsoever.

We have already seen and documented how the neocons in Washington and Tel Aviv have done everything conceivable to foment factional violence and facilitate arms supplies to quisling Abbas of the Fatah faction (rival to the democratically elected Hamas). The resilience of the Palestinians for so long in the face of this and continued subjection to the deprivation of food, movement, electricity, basic services, aid and economic development is a remarkable testament to humanity.

Yet despite all these hegemonial efforts with all their resources at their disposal to undermine and destroy Hamas, Hamas has seized control of much of Gaza. As Ali Abunimah writes, we have seen a setback to the Bush doctrine in Gaza, though it comes at a high price to the Palestinians. As always, ordinary Palestinians suffer while would-be local puppets gamble with lives.

What is happening is, in effect, a US-Israeli proxy war, with Israel facilitating arms and movement for Fatah, aiming to bury Hamas.

This is not a secret but an open declaration to ‘sink Hamas’; Netanyahu’s latest despicable exhortation to shut off water to Palestinians is also illustrative of their bloody-minded intent right from the start. As Abunimah writes, lest we forget that

Ever since Hamas won the Palestinian legislative elections in the occupied territories in January 2006, elements of the leadership of the long-dominant Fatah movement, including Palestinian Authority chairman Mahmoud Abbas and his advisors have conspired with Israel, the United States and the intelligence services of several Arab states to overthrow and weaken Hamas. This support has included funneling weapons and tens of millions of dollars to unaccountable militias, particularly the “Preventive Security Force” headed by Gaza warlord Mohammad Dahlan, a close ally of Israel and the United States and the Abbas-affiliated “Presidential Guard.” US Deputy National Security Advisor Elliott Abrams — who helped divert money to the Nicaraguan Contras in the 1980s and who was convicted of lying to Congress in the Iran-Contra scandal — has spearheaded the effort to set up these Palestinian Contras. … Abrams is also notorious for helping to cover up massacres and atrocities committed against civilians in El Salvador by US-backed militias and death squads.

Two recent revelations underscore the extent of the conspiracy: on 7 June, Ha’aretz reported that “senior Fatah officials in the Gaza Strip have asked Israel to allow them to receive large shipments of arms and ammunition from Arab countries, including Egypt.” According to the Israeli newspaper, Fatah asked Israel for “armored cars, hundreds of armor-piercing RPG rockets, thousands of hand grenades and millions of rounds of ammunition for small caliber weapons,” all to be used against Hamas.

From the moment of its election victory, Hamas acted pragmatically and with the intent to integrate itself into the existing political structure. It had observed for over a year a unilateral ceasefire with Israel and had halted the suicide attacks on Israeli civilians that had made it notorious. In a leaked confidential memo written in May and published by The Guardian this week senior UN envoy Alvaro de Soto confirmed that it was under pressure from the United States that Abbas refused Hamas’ initial invitation to form a “national unity government.” De Soto details that Abbas advisers actively aided and abetted the Israeli-US-European Union aid cutoff and siege of the Palestinians under occupation, which led to massively increased poverty for millions of people. These advisors engaged with the United States in a “plot” to “bring about the untimely demise of the [Palestinian Authority] government led by Hamas,” de Soto wrote.

If the US and Israeli administrations had respected Hamas’s democratic mandate, respected the Palestinian right to self-determination and adhered to international law, we would not see this happening. But ask not for whom the bell tolls, because blowback is likely. One comment on “On Gaza: those who pull out the peoples eyes condemn them for being blind”