Greenback and the Capital of Empire Part I

Violence can only be concealed by a lie, and the lie can only be maintained by violence.
–Alexander Solzhenitsyn

War is a racket. It always has been. It is possibly the oldest, easily the most profitable, surely the most vicious.
–Marine Corp General Smedley Butler

Dollar hegemony: in part, its the notion that the US imperium is not simply predicated upon oil, but the supremacy of the dollar; in particular, the petrodollar. It goes toward describing how the US in particular requires a steady diet of petrodollars to maintain the massive debt and burgeoning trade deficit that underpins unprecedented levels of consumerism and consumption — the famous “way of life” that George Bush Senior notably declared was “non-negotiable” during his Presidency. Non-negotiable to the neocons, perhaps, but unsustainable to many in the reality based community, with claims of imminent dollar decline, if not collapse.

People who have written extensively on the topic include (but are not limited to — see suggested Further Reading List to be appended) Mike Whitney, William Clark and Ron Paul.

As Mike Whitney puts it, the dollar is also the Achilles heel of the empire: “When the dollar collapses, the baling-wire of economic coercion that keeps the empire sewn together will quickly unravel.”

Let’s examine that claim further. Here, I review some of their recent writing this week on the US dollar, the Federal Reserve and dollar hegemony, as well some observations on the still under-examined topic of an Iranian oil bourse and the implications of the switch to Euros.

Mike Whitney continues his interesting prognostications on what he sees as the doomed dollar. In Doomsday for the Greenback (ICH, 10 April) he updates his 2005 article by the same name, in which he wrote:

America’s capital is not in Washington DC. In fact, it is not geographic location at all. It is the greenback, the epicenter of the global rule. The dollar is the cornerstone upon which the mighty pillars of empire rest.

At the same time, the greenback is the greatest swindle in human history; a worthless scrap of paper buried beneath a mountain of debt. It is only through the skillful mix of politics, diplomacy, and brute force that the grand deception is maintained. As America’s fortunes grow more tenuous, the probability of attacks on the dollar will increase exponentially. Even now, nations are conspiring to knock the dollar from its towering summit and introduce a more equitable system.

At present, the greenback serves as the world’s reserve currency, the main medium of exchange. This allows the US to pile up enormous debt while avoiding the pitfalls of skyrocketing interest rates or hyper-inflation. The $2 billion of borrowed wealth that props up the faltering empire every day comes primarily from the exporting powerhouses Japan and China. This means that America’s profligate spending is financed by the labor of some of the most poorly paid workers in the world.

That’s right. US debt is in effect financed by foreigners, and that is not going to continue indefinitely. “America’s biggest export is its fiat-currency which foreigners are increasingly hesitant to accept”, Whitney writes in this week’s article. “Can you blame them?”

As holders of foreign reserves, countries such as China and Japan in particular in effect “purchase” US debt. So when the Governor of China’s Central Bank, Zhou Xiaochuan, announces that “China will diversify its $1 trillion foreign exchange reserves, the largest in the world, across different currencies and investment instruments, including in emerging markets” (Reuters), that’s something to sit up and take notice about, since 70% of China’s currency reserves are currently in US dollars.

With a trade deficit already at unsustainable levels and endangering the assurance of paying creditors, “(t)he dollar is already in big trouble–the only thing keeping it afloat is foreign purchases of US debt by creditors who don’t want to be left holding trillions in worthless paper.” Indeed, “(t)hese ‘net inflows’ have created a false demand for the dollar which will inevitably dissipate as central banks continue to diversify.” (my italic emphasis)

What does Whitney say of the role of finance capital and lenders in the lead-up to the war on Iraq?

If we look carefully at the Iraq war, the main financial institutions stood squarely behind the hostilities and did their best to create a hospitable economic environment for aggression. The Federal Reserve dropped the prime rate to a paltry 1.5% just 6 months before the Iraq invasion to keep the American economy purring along while Bush dragged the nation to war. The bloody footprints for Iraq lead straight to the oak-panel doors of America’s primary lenders even before they trail off to the bastions of America’s energy giants.There’s a reason for this. The main impetus for the war was not petroleum, but greenbacks and the future of a currency that is underwritten by $8 trillion of debt. The only way to safeguard its dominance is to back up the listing dollar with boatloads of oil. And, that is exactly the plan.

To be sure, Big Oil tends to prefer stable, authoritarian regimes. But here, Whitney suggests a rationale exists behind the madness for the creative destruction of Iraq—ultimately, its good for business in a larger sense than even the massive criminal war profiteering: it maintains US dollar supremacy as the monopoly currency of oil. 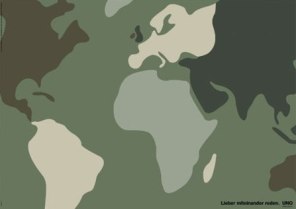 This is worthy of consideration because it adds an under-examined variable into why the invasion of Iraq took place. Explanations centred around oil and Israel’s geopolitics are still crucial, but on their own, each constitutes but one dimension. This explanation on its own too can fall to economic and financial determinism, but taken together these three major reasons do seem to paint a more plausible and clearer causal picture. Candidly stated, ‘Operation Iraqi Freedom’ was a war designed to install a pro-U.S. government in Iraq, establish multiple U.S military bases before the onset of global Peak Oil, and to reconvert Iraq back to petrodollars while hoping to thwart further OPEC momentum towards the euro as an alternative oil transaction currency (i.e. “petroeuro”). However, subsequent geopolitical events have exposed neoconservative strategy as fundamentally flawed, with Iran moving towards a petroeuro system for international oil trades, while Russia evaluates this option with the European Union. In 2003 the global community witnessed a combination of petrodollar warfare and oil depletion warfare.

The dollar vs euro currency war appears then to be a factor, for it crucially underpins American hegemony. A face-off between the dollar and euro would fundamentally change the dynamics in the world’s largest market. “In essence,” Clark observes, “the US will no longer be able to effortlessly expand credit via US Treasury Bills, and the dollars demand-liquidity will quickly fall, [challenging] the hegemony currently enjoyed by the financial centers in both London and New York.”

The Bush administration will never allow the Iranian government to open an oil exchange (bourse) that trades petroleum in euros. If that were to happen, hundreds of billions of dollars would come flooding back to the United States crushing the greenback and destroying the economy. This is why Bush and Co. are planning to lead the nation to war against Iran. It is straightforward defense of the current global system and the continuing dominance of the reserve currency, the dollar.

Some basic background: Since the gold standard was abandoned in the early seventies, the dollar has essentially been propped up by dint of the fact that the US monopolises the oil trade. That is, world trade in oil is denominated in dollars and primarily sold on either the New York Mercantile Exchange or London’s International Petroleum Exchange. Because of this, central banks around the world have to maintain huge stockpiles of dollars, which essentially finance and make possible the nearly nine trillion dollars of debt the US carries.

Though also challenged by some analysts, several commentators have said that if the dollar is replaced by euros, the value of the dollar will drop to around fifty percent or one hundred percent inflation overnight. The argument goes that the American and British economies would be severely affected, if not subject to collapse.

Which brings us back to the US Federal Reserve.

8 comments on “Greenback and the Capital of Empire Part I”