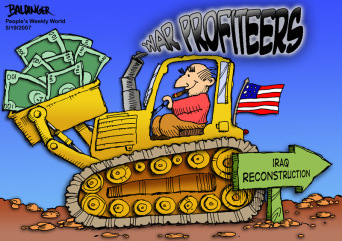 It has been quite a week for the US Congressional House Appropriations Committee (defense subcommittee), with two investigative journalists delivering their testimonies on war profiteering in the past week. The week has also seen a majority of Iraqi legislators, as US-installed and backed as they are, vote to reject the occupation of their country and call for a withdrawal.

The full testimony transcript of filmmaker Robert Greenwald, who brought us the documentary Iraq for Sale, can be found here and that of Jeremy Scahill, author of Blackwater: The Rise of the World’s Most Powerful Mercenary Army, here, with videos and excerpts below.

There are 126,000 private contractors currently deployed in Iraq, a force Scahill has described as “the world’s most powerful mercenary army” and an unaccountable one at that. Such a heavy reliance on private contractors — they constitute almost half the military US presence — has enabled the Bush administration to nearly double the number of U.S. forces in Iraq without the general knowledge of U.S. taxpayers.

Quite apart from the immoral and illegal invasion of Iraq, there has also been much known profiteering, corruption and waste and egregious abuses of the procurement system and unscrupulous practises. Without impugning all of them, a substantial number of contract workers in Iraq are committing crimes — including killings — with impunity and wasting millions of dollars.

Greenwald told lawmakers that these contractors were among the interrogators and translators who tortured prisoners at Abu Ghraib prison, yet no contractors were charged with crimes. They are granted immunity from prosecution under Iraqi law by Paul Bremmer, head of the Coalition Provisional Authority that ruled Iraq in 2003 and 2004, and they are not subject to U.S. military (or as yet, civilian) law.

Scahill contrasted the well-equipped private mercenaries with the often barely equipped US Army soldiers, stating that while many soldiers lack basic protective equipment, private mercenaries whiz by in better vehicles and armor, “wearing the corporate logo instead of the American flag” (transcript appended, see also video).

He proposes the passing of “anti-mercenary legislation” similar to a law the South African parliament passed last year, which bars South African citizens from serving in foreign armies or security forces abroad without government permission.

The two testimonies have gone towards shining a much needed torch on the privatization of war, bringing it onto the US Congressional record for the first time:

Greenwald on the role of CACI and TITAN in Abu Ghraib torture (3:36) at the House hearings:

From Greenwald’s testimony, he says:

“Iraq For Sale” was seen by hundreds of thousands of people around the country, and I cannot tell you the number of soldiers who saw it and thanked us for exposing the toll that contracting and profiteering are taking on our armed forces and on the war in Iraq.

I was also appalled to learn of the amount of waste by contractors in Iraq.

I remember clearly my interview with Stewart Scott, a former Halliburton employee. With pain and rage in his voice, he said how dare Halliburton put its people up at five-star hotels, while the soldiers, who he was there to help, were sleeping on the ground. I did not believe in him at first, but then he began naming the hotels and the locations. It was all true.

The trucker said he would get us some photos. And I naively asked, how big are they, the size of a backyard swimming pool? He laughed, and referred to one that he had seen that was 15 football fields large, and burned around the clock! It infuriated him to have to burn stuff rather then give it to the Iraqis or to the military. Yet Halliburton was being rewarded each time they billed the government for a new truck or new piece of equipment. With a cost- plus contract, the contractors receive a percentage of the money they spend. As Shane told me, “It’s a legal way of stealing from the government or the taxpayers’ money.”

… Cost-plus and no-bid contracts are hopelessly undermining our efforts and costing the taxpayers billions. They do not operate within a free-market system and have no competition, but instead create a Stalinist system of rewarding cronies. In a letter from Sgt. Jon Lacore talking about the enormous amount of waste, he said, “I just can’t believe that no one at all is going to jail for this or even being fired or forced to resign.”

Jeremy Scahill continues his investigative work on private military contractors in Iraq in this May 11 DN interview. An excerpt with my boldface emphasis follows (can be read in full here):

(T)here are 48,000 employees of private military companies in Iraq alone. These forces work for US companies like Blackwater, Triple Canopy and DynCorp, as well as companies from across the globe. Some contractors make in a month what many active-duty soldiers make in a year. Indeed, there are private contractors in Iraq who make more money than the Secretary of Defense or the commanding generals.

The testimony about private contractors that I hear most often from active-duty soldiers falls into two categories: resentment and envy. They ask what message their country is sending them. While many soldiers lack basic protective equipment, facts well-known to this committee, they’re in a war zone where they see the private soldiers. They whiz by in better vehicles, better armor, better weapons, wearing the corporate logo instead of the American flag, and pulling in much more money. They ask, “Are our lives worth less?” Of course, there are many cases where contractors have horded the profits at the top, and money is not filtered down to the contractors on the ground or armor to protect them, and we can discuss that later.

The second reaction I hear from active-duty soldiers is that they see what they refer to as these rock star private contractors, and they want to be like them. So we have a phenomenon of soldiers leaving the active-duty military to jump over to the private sector. There’s now slang on the ground in Iraq for this jump; it’s called “going Blackwater.” To put it bluntly, these private forces create a system where national duty is outbid by profits, and yet these forces are being used for mission-critical activities. Indeed, in January, General David Petraeus admitted that on his last tour in Iraq he himself was protected by private contract security.

Just as there’s a double standard in pay, there’s a double standard in the application of the law. Soldiers who commit crimes or acts of misconduct are prosecuted under the Uniform Code of Military Justice. There have been some sixty-four courts-martial on murder-related charges alone in Iraq. Compare that to the lack of prosecution of contractors. Despite the fact that tens of thousands, perhaps hundreds of thousands, of contractors have gone in and out of Iraq since March of 2003, only two have faced any criminal prosecution. Two. One was a KBR employee alleged to have stabbed a coworker in a kitchen. The other pled guilty to possession of child pornography images on his computer at Abu Ghraib prison.

In four years, there have been no prosecutions for crimes against Iraqis committed by contractors and not a single known prosecution of an armed contractor. That either means that we have tens of thousands of boy scouts working as armed contractors or something is fundamentally wrong with the system.

These are forces operating in the name of the United States of America. Iraqis do not see contractors as separate from soldiers. Understandably, they see them all as the occupation. Contractor misconduct is viewed as American misconduct.

While there’s currently a debate in this congress about how to hold these private forces accountable, the political will to act remains shockingly absent. Given the vast size of this private force spread across the most dangerous war zone in the world, it is not at all clear how effective oversight would work. We already know that auditors cannot visit many reconstruction sites because of security concerns. Journalists are locked in the Green Zone. The Army is stretched to the max. So what entity then is supposed to have the capacity or the ability to oversee the men who have been brought to Iraq to go where no one else will?

Members of Congress tell me they’ve been stonewalled in attempts to gain detailed information about the activities of these private contractors. I think it’s a disturbing commentary that I’ve received phone calls from members of Congress asking me for documents on the contractors, and not the other way around. In the current discussion in the Congress on this issue, what is seldom discussed is how this system, the privatization of war, has both encouraged and enabled the growth and creation of companies who have benefited and stand to gain even more from an escalation of the war.

In closing, while I think this congress needs to take urgent action on issues of oversight, accountability and transparency of these private forces operating with our tax dollars and in the name of the United States, there’s a deeper issue that often gets overlooked. This war contracting system has intimately linked corporate profits to an escalation of war and conflict. These companies have no incentive to decrease their footprint in the war zone and every incentive to increase it. As the country debates current and future Iraq policy, Congress owes it to the American people to take down the curtain of secrecy surrounding these shadow forces that often act in the name and on the payroll of the people of this country.