'The Battle for Israel's Soul' – Channel 4 on Jewish fundamentalism 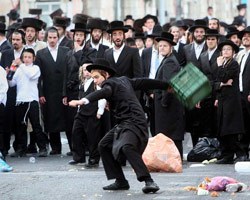 Jewish fundamentalism is something the mainstream media torch is rarely shone on, with recent articles about spitting at Christian clergy being confined mostly to the israeli press. Few exceptions exist: this year, Australian journalist Anne Barker reported on her experiences on getting caught in an ultra-orthodox attack, and in 2006 Brian Whittaker had a piece on the Haredim’s medieval sexism which has resulted in more than a few public beatings of women who dared to sit at the front of the bus.

In the UK, Channel 4’s Unreported World program has now become another exception, recently airing ‘The Battle for Israel’s Soul’ (video below).  The episode focuses on Israel’s Haredim, describing how the “rapid growth of Jewish ‘fundamentalists’ is creating tension within Israeli society and endangering any negotiations on a peace deal with the Palestinians.” But contrary to the presentation by some secular israelis of the Haredim as the ‘enemy within’, the putatively secular zionist entity does little to rein them in and not only subsidizes them, but continues to exist and expand through their actions. Put another way, the state’s fundamentalism is symbiotically connected to the actions of some of their most fanatical adherants. And that is something public policy in the US currently fails to grapple with.

Related to these illegal colonists, journalist Alan Hart notably reports an explosive detail — that in a private conversation, then Israeli Minister of Defense (and later President) Ezer Weizman told him the following:

This lunchtime Sharon convened a secret meeting of some of our generals and other top military and security people. They signed a blood oath which commits them to fight to the death to prevent any government of Israel withdrawing from the West Bank.” Pause. “I know that’s what happened at the meeting because I’ve checked it out, and that’s why I was late.

Hart adds, “In the event of any Israeli government deciding to withdraw from all of the West Bank, the oath committed them to make common cause with the settlers and fight that government “to the death”.

Reporter Evan Williams and director Alex Nott begin their journey in the Mea Sharim district of Jerusalem. It’s the heartland of ultra-Orthodox Jews known as the Haredi, or ‘those who fear God’. They find a poor, overcrowded part of the city where everyone is wearing clothes in the style of 18th-century Europe, from where most of their ancestors came. ‘We are the real Jews,’ says one community leader, ‘everyone else in Israel just happens to be born Jewish.’

Many of the Haredi sects were almost wiped out in the Holocaust. But their numbers are growing fast. Haredi are the fastest growing segment of Israeli society, with many families having as many as eight children. ‘Every 20 years we have a community that is growing at eight or nine times,’ says one of the Haredi men to Williams. ‘It means we are growing in size and influence.’

Many Haredi men in Israel don’t work as they receive government subsidies to spend their entire lives studying the Torah and religious texts. One Rabbi from the Reform wing of Judaism tells Williams that, because Haredis are exempt from military service and heavily subsidised, they are creating huge tensions within the country.

In an inner-city neighbourhood the team find the Haredi imposing strict segregation of the sexes on public buses. Then they meet one woman who lived in the Haredi community who claims she was beaten up in her own home by a so-called Haredi Modesty Squad after she left her husband.

Across town, the team finds a group of Haredi men protesting outside the home of a government social worker who had a Haredi child taken away from his mother due to claims the mother may have been starving the boy. The Haredi protestors tell the team they don’t recognise the state and reject any state interference in their family or community affairs, which they consider sacred.

The team finds that Haredi are increasingly becoming an issue in the conflict with Palestinians due to their need for housing. Two hours north of Jerusalem, at a new development in a part of the country which is 80% Arab Palestinian and 20% Jewish, the team is told by a local peace activist that the Israeli government is building a city for 150,000 Haredi as a way of balancing the Arab population growth in the area. In the West Bank, the team visits another city, where Israeli soldiers are guarding a Haredi construction project despite protests from Palestinians who say it is being built on their farmland.

Williams and Nott return to Jerusalem to find out why the Haredi seem to be able to protect their economic and social privileges. They are told the Haredi are becoming increasingly powerful politically and with about 10% of the seats in the Knesset they now hold the balance of power and are necessary partners for any major party wanting to form a government.

Later the team is caught up in a Palestinian protest fueled by rumours that another separate group of extremists, the religious-nationalists, are trying to occupy the Temple Mount – Judaism’s Holiest site – by entering the most prominent Mosque in the city.

As Unreported World discovers, the moderate voices in Israel are increasingly being forced to accommodate growing extremism of all kinds if they are going to approach anything like a negotiated settlement with the Palestinians.

This entry was posted on 5 December, 2009 by Ann in Israel, Judaism, Palestine and tagged Haredi, The Battle for Israel's Soul.