Alan Hart does well to provide this historical corrective, excerpted from ‘Israel’s Right to Exist?‘ 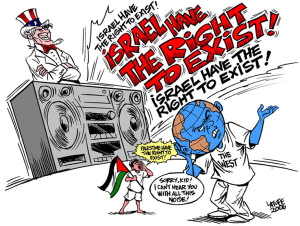 According to history as written by the winner, Zionism, Israel was given its birth certificate and thus legitimacy by the UN Partition Resolution of 29 November 1947. This is propaganda nonsense.

The truth of the time was that the Zionist state, which came into being mainly as a consequence of pre-planned ethnic cleansing, had no right to exist and, more to the point, could have no right to exist UNLESS … Unless it was recognised and legitimized by those who were dispossessed of their land and their rights during the creation of the Zionist state. In international law only the Palestinians could give Israel the legitimacy it craved. And that legitimacy was the only thing the Zionists could not and cannot take from the Palestinians by force.

One comment on “Israel’s ‘Right To Exist’? The UN Legitimacy Myth”

This entry was posted on 4 November, 2009 by Ann in Israel, Palestine, UN and tagged Alan Hart.