Norman Finkelstein: Why I resigned from the Gaza Freedom March coalition (updated) 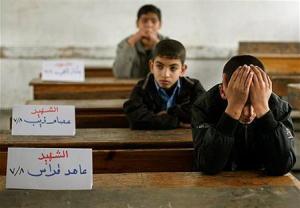 Palestinian schoolboys sitting beside the empty seats of friends who were killed in Israel's December 08/ January 09 bombing raid on Gaza.

Norman Finkelstein has announced his resignation from the Gaza Freedom March Coalition. He cites the adding of a Political Context statement, which he dubs ‘sectarian’, as the reason he fears the movement’s appeal would be narrowed.  As noted previously, Finkelstein’s involvement has not been uncontroversial, but his absence is a pity. This important movement to urgently end the illegal and reprehensible siege of Gaza Palestine needs the widest possible support. You can sign up for the trip here. (For context, also see this excellent post by our friend Max Ajl who is himself involved in organizing the march).

UPDATE: The Electronic Intifada has published this thoughtful response from Gabriel Ash, Mich Levy, and Sara Kershnar, Compromising for Gaza without compromising Palestine.

The original consensus of the International Coalition to End the Illegal Siege of Gaza was that we would limit our statement to a pair of uncontroversial, basic and complementary principles that would have the broadest possible appeal: the march to break the siege would be nonviolent and anchored in international law.

I agreed with this approach and consequent statement and decided to remove myself from the steering committee in order to invest my full energies in mobilizing for the march.  During the week beginning August 30, 2009 and in a matter of days an entirely new sectarian agenda dubbed “the political context” was foisted on those who originally signed on and worked tirelessly for three months.

Because it drags in contentious issues that—however precious to different constituencies—are wholly extraneous to the narrow but critical goal of breaking the siege this new agenda is gratuitously divisive and it is almost certain that it will drastically reduce the potential reach of our original appeal.

It should perhaps be stressed that the point of dispute was not whether one personally supported a particular Palestinian right or strategy to end the occupation.   It was whether inclusion in the coalition’s statement of a particular right or strategy was necessary if it was both unrelated to the immediate objective of breaking the siege and dimmed the prospect of a truly mass demonstration.

In addition the tactics by which this new agenda was imposed do not bode well for the future of the coalition’s work and will likely move the coalition in an increasingly sectarian direction.  I joined the coalition because I believed that an unprecedented opportunity now exists to mobilize a broad public whereby we could make a substantive and not just symbolic contribution towards breaking the illegal and immoral siege of Gaza and, accordingly, realize a genuine and not just token gesture of solidarity with the people of Gaza.

In its present political configuration I no longer believe the coalition can achieve such a goal.   Because I would loathe getting bogged down in a petty and squalid public brawl I will not comment further on this matter unless the sequence of events climaxing in my decision to resign are misrepresented by interested parties.

However I would be remiss in my moral obligations were I not humbly to apologize to those who, either coaxed by me or encouraged by my participation, gave selflessly of themselves to make the march a historic event and now feel aggrieved at the abrupt turn of events.  It can only be said in extenuation that I along with many others desperately fought to preserve the ecumenical vision that originally inspired the march but the obstacles thrown in our path ultimately proved insurmountable.

We were just informed that the organizing committee of the Gaza Freedom March has finally adopted the statement of context that takes into consideration the key constructive suggestions expressed by both of us (Omar Barghouti and Haidar Eid) weeks ago.

We and the organizers of the March have reached an agreement whereby the Call will be posted with a clear reference to the statement of context, which clearly acknowledges that Palestinians have for over six decades been denied their basic rights that they are entitled to under international law, including the right of return, and the fact that Palestinian civil society has adopted Boycott, Divestment and Sanctions (BDS) as one of its main civil resistance strategies against Israel’s occupation and other injustices.

Accordingly, we fully endorse the Gaza Freedom March call to action and statement of context, and we call on all supporters of international law, just peace and Palestinian rights to endorse them as well and to do whatever is possible to make this March a success.

A lot of work still needs to be done, clearly, to iron out organizational and logistical details, particularly to minimize the risks to the Palestinians in Gaza who will participate in this form of civil resistance; but these challenges can best be met by a wide coalition of enthusiastic, principled and well organized networks across the world, all coming together to make this happen. It can also happen if we all manage to convince world renowned figures to lead the March, as initially planned.

Read the new call of the Gaza Freedom March, at this link :
http://salsa.democracyinaction.org/o/424/t/9750/petition.jsp?petition_KEY=2055

—
In Solidarity
from all
International Movement to Open Rafah Border

“Only a united world against oppression will help unite and free all of Palestine.”

We think most Palestinians will agree that the intentions behind this call are noble and that there is clear moral courage involved in endorsing this freedom march. We think that this initiative, “inspired by decades of nonviolent Palestinian resistance from the mass popular uprising of the first intifada to the West Bank villagers currently resisting the encroachments of Israel’s annexationist wall”, is worthy of the widest international support.

We do have a few concerns and constructive suggestions, though, and we want to share them with you:

1) The statement omits — perhaps inadvertently — the necessary legal and political context of the illegal siege, Israel’s 42-year-old military occupation and 61-year-old denial of the UN-sanctioned rights of the Palestinian refugees, who constitute more than 75% of the population of the occupied Gaza Strip. This is a substantial oversight, as the siege is not just about suffering and humanitarian needs, but political rights, above all the right to self determination, as stipulated in UN principles. The only mention of the occupation comes towards the very end, without an explicit call to end it: “The truth is that if international law were enforced the occupation would be unsustainable.” This is equivalent to issuing a statement in the 1980s calling for action in solidarity with the South African majority without mentioning ending apartheid.

2) From all the available information, this whole idea of a non-violent march in Gaza against the siege was conceived and developed without due consultation with Palestinian civil society representatives (elected parliamentarians, leading academics/intellectuals, experienced activists, trade unionists, women leaders, student leaders, etc.), particularly those in Gaza. While the document talks about “joining ranks with the people of Gaza”, in reality, the Palestinian people in Gaza are the ones being invited here to join ranks with predominantly international figures, going to Gaza in an otherwise deeply appreciated show of solidarity and moral courage. This is not to undermine the idea; it just highlights the fact that the proposal comes from outside without taking into consideration the aspirations, concerns and express needs of the Palestinian people under siege in Gaza.

One obvious example of such needs is for international civil society to apply pressure on the Egyptian authorities to reopen the Rafah Crossing to allow freedom of movement and partially relieve the humanitarian crisis, in such a way that does not help Israel claim that its effective control over, and therefore occupation of, Gaza has ended. The marches, many people in Gaza believe, should aim at breaking the siege in a way that will allow people to move freely out of Gaza. Rafah is currently the only exit Gaza has to the external world; opening the Erez/Beit Hanoun checkpoint would – obviously — still not allow freedom of movement as Israel alone decides who exits and under what circumstances and conditions, as the case was before the full application of the siege. We, therefore, think that pressure to reopen the Rafah Crossing is crucial and deserves to be highlighted in the statement. The fact that Egypt has managed to open the Crossing so many disparate days already shows that it can and that it is vulnerable to pressure. Accordingly, simultaneous marches should, in our view, be organized to Erez as well as the Rafah Crossing.

3) While over-emphasizing Gandhian non-violence, the statement ignores the most effective, home grown, non-violent form of resistance advocated by most Palestinians today: BDS. This omission is particularly perplexing given that BDS is not only the most prevalent non-violent form of resistance today; it is inspired by a century of Palestinian civil struggle and more recently by the anti-apartheid struggle in South Africa. Furthermore, there were no efforts made by the initiators of this proposal to coordinate or consult with the BDS National Committee, BNC, the umbrella group of the most important Palestinian political parties, trade unions, mass movements and NGOs that is guiding and leading the global BDS movement.

5) Some of the most impressive popular resistance actions in Gaza are worth mentioning in the statement as part of the “chain of nonviolent resistance to Israel’s flagrant disregard of international law.” Examples include the human chain from Rafah to Erez, the tearing down of the border barrier separating Gaza from Egypt and the marches to the six checkpoints separating the occupied Gaza Strip from Israel.

62 comments on “Norman Finkelstein: Why I resigned from the Gaza Freedom March coalition (updated)”

This entry was posted on 7 September, 2009 by Ann in Activism, Gaza, Palestine and tagged Haidar Eid, International Coalition to End the Illegal Siege of Gaza, Norman Finkelstein, Omar Barghouti.