A Sderot woman speaks out against Israel's brutal folly

Nomika is a member of a rare (for Sderot) peace group named Other Voices (Kol Aher, site in Hebrew). Her testimony below, translated from the Hebrew by Assaf Oron, provides a disturbing glimpse into Israel’s mass bellicosity (some would say severe collective psychosis) against which citizen peace groups like Kol Aher operate. Nomika is commended for her courageous and principled stance, albeit one that still imbibes the Israeli state’s vilification of Hamas.

Suffer the children, half of Gaza’s population. From this to this (click on images for provenance, images h/t TenPercent) 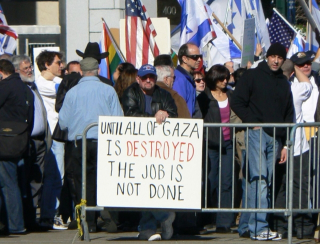 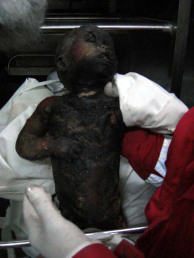 “I talk with Sderot people and everyone’s cheeks are rosy again”, boasted Fuad on the war’s second day [Fuad is Benjamin Ben Eliezer, a long-time ‘centrist’ Labor minister – Assaf]. “The heavier the blow we deliver – the more our hearts widen”.

Hey Fuad, not everyone. Even if I was the only one around Sderot feeling differently – and I am not – my voice should be heard.

I got myself neither security nor quiet from this war. After such an essential calm, that helped all of us heal emotionally and mentally and experience some sanity again [Nomika is referring here to the first 5 months of cease-fire, which were observed by both sides – Assaf] – our leaders have brought us back to the same wounded, anxiety-ridden place. To the same humiliating, terrified sprinting to shelter.

Don’t mistake me. Hamas is an evil, terrible terror organization. [sic] Not just for us. First and foremost to its own citizens. But beyond that wretched leadership there are human beings. With hard labor, ordinary people on both sides build small bridges of human gestures. This is what the Kol Aher, a group of people from Sderot and elsewhere on the Gaza border of which I am a member, has been doing. We have tried to lay down a human route to the hearts of our neighbors. While we have won a five-month calm, they continued to suffer under the siege. A young man told us he does not wish to marry and have kids, because in Gaza there is no future for children. A single airplane bomb drowns these human gestures in depths of blood and despair.

Qassams scare me. Since the war started, I almost didn’t dare cross the street. But even more frightening is the monolithic tone in our public sphere and our media, the unbreachable wall of jingoism. It scares me when my Kol Aher colleague is assaulted by other Sderotis, as he is interviewed and criticizes the war – and later receives anonymous phone threats and is afraid to return to his car. It scares me how little room there is for another voice, and how difficult it is to express it here. I am willing to pay the price of social isolation, but not the price of fear.

It scares me to see my city light up, celebrate and put up flags, and cheerleader squads hand out flowers on the streets, and people honk in glee at every one-ton bomb dropped on our neighbors. It scares me to hear the resident who happily admits that he has never been to a concert, but IDF’s bombing of Gaza is the best music he has ever heard. I am scared by the smug reporter interviewing him, who doesn’t challenge him even one bit.

It scares me that under the screen of Orwellian words, and the children’s corpses blurred on TV as a public service to us, we are losing the human ability to see the other side, to feel, to be shocked, to feel empathy. Under the codename ‘Hamas’, the media has created for us a huge dark demon with no face, no body and no voice. A million and a half people with no name.

A deep, dark stream of violence flows into the veins of Israeli society like a deadly disease, and it gets stronger from war to war. It has no smell and no shape, but we feel it very clearly here. It is a type of euphoria and trigger-happiness and joy of revenge and power-drunkenness and love of Mars, and the burial of the noble Jewish commandment: “when your enemy falls – do not celebrate”. Our morality is so polluted, so soiled now that it seems no washing will be able to remove the stains. Our democracy is so fragile, that you have to weigh every word in order to safeguard yourself.

The first time I felt the state is really protecting me, was when they got the ceasefire. I am not responsible for Hamas, and therefore I ask our own leaders: have you turned every stone in order to continue the calm? To extend the ceasefire? To use it to get a long-term agreement? To resolve the border-crossing and siege issues before they blow the whole thing up? Have you gone to the ends of the world looking for the right mediators? And why did you wave away, unblinkingly, the French ceasefire initiative after the war started? And why do you keep rejecting, to this very moment, every possible offer of negotiations? Do you think we have not reached our maximum Qassam quota here, that we can stand some more? That we have not yet reached the quota of killed Palestinian children that the world can stomach?

And who guarantees that Hamas can be toppled? Haven’t we tried this trick elsewhere? And who will come in its place? Global fundamentalist organizations? Al Qaeda? And how, from the heaps of rubble and hunger and cold and dead bodies, will moderate voices of peace grow? Where are you leading us? What future are you promising us here in Sderot?

And how much longer will you hang on our backs the tired old “backpack of lies” [cultural reference to a well-known book of 1948 war anecdotes – Assaf]: “there’s no one to talk with”, “it is a no-choice war”, “let the IDF finish the ‘job’”, “one good blow and we finish them”, “let’s topple the Hamas” and “who doesn’t want peace?”. The lies of brute force and the idiocy of even more brute force – your only guide for resolving the region’s problems.

And how come every hasty interview with a Kol Aher member, always begins and ends with the disdainful punch line by the reporter: “Don’t you think you are being naive?” How come the option of dialogue and negotiation and agreements and understandings, even with the worst of our enemies, has become a synonym for naivete, while the option of brute-force and war is always a wise, rational, ultimate one? Eight year of senseless cycle of bloodshed haven’t taught us anything about the futility of brute force? The IDF has slammed and shot and assassinated and razed and hit and missed and bombed – and what have we gotten in return? A rhetorical question, ain’t it.

It is extremely hard to live in Sderot nowadays. At night, the IDF pounds infrastructure and human beings, and our home walls shudder. By morning, we get Qassams – more sophisticated ones each time. A person going to work in the morning, does not know whether their home will be found standing by evening. At midday, we bury the best of our sons, who have paid with their lives for yet another “just” war. In the evening, after many difficulties, we manage to make contact with our desperate friends in Gaza. They have no electricity, no water, no gas, no food, nowhere to hide. And only the words of N., the 14-year-old whose school was bombed and whose classmate was killed, don’t leave my head. She writes us in perfect English, an email that her mom somehow managed to send:

“Help us, we are human beings after all”

No, Fuad, my cheeks are not rosy, they are not. A ton of Cast Lead is weighing on my heart, and my heart cannot contain it.

(translated from Hebrew by Assaf Oron)

This entry was posted on 12 January, 2009 by Ann in Gaza, Israel, Palestine and tagged Nomika Zion, Pulse, Sderot.