I feel suffocated here… Last week when I came, I kept hearing people talk about being in a “prison”, “animals in a cage”, time and time again. A week later I feel that I am beginning to understand what they mean. Bethlehem is now being enclosed by the wall also known as a security fence. I can assure you that it certainly is no “fence” as you and I know the term. This fence is 8 metres high in some areas, and is made of solid concrete slabs lined next to each other. Every 200m there is a watch tower, which towers even higher than the 8 m, and has a circular room at the top with glass panels in all directions, where you can often see IOF (Israeli Occupation Force) soldiers sitting and watching. In other areas, the wall is reinforced with barbed wire – for extra security.

Israel states that this wall is a temporary measure, but there certainly seems nothing temporary about it. The wall is mainly built on Palestinian territory and does not follow the 1967 Green Line, which is meant to be the pre-occupation border. The perimeter of the Green Line is 320km in length, but the wall is projected to be more than 750km by the time it is completed. This is a result of the snaking in and out of the wall so that it can accommodate the illegal Israeli settlements on Palestinian territory, therefore increasing the total perimeter.

In Bethlehem, you can see the wall in practically all directions; there are 2 checkpoints in and out. If you are Palestinian you automatically can not use one of them. However if you are Palestinian with an Israeli/ Jerusalem ID then you can. So the majority of the people here can only enter and exit via one point. It is no longer an area where you can walk or drive through until you reach the next town or area, if you want to go to Jerusalem or to the west. 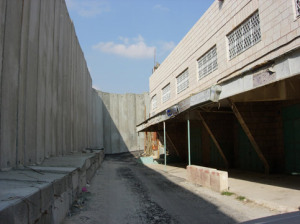 One of the girls here showed me her garden and the wall. The wall has been erected on her family’s land next to her house. They can no longer access the land on the other side and now this belongs to Israel. Were they asked? No. Were they offered any compensation? No. What can they do? Nothing. Hers is not the only case of such a situation.

Down below is a road, a main road like a dual carriage way, I can see it clearly from our bedroom window, Route 60 I am told it’s called. Again this snakes through Beit Jala (Bethlehem consists of 3 main areas – Bethlehem, Beit Jala and Beit Sahour) – this road is on Palestinian land in a Palestinian town but Palestinians are not allowed to use it. It is a road for Israelis only.

Life here is difficult in every sense of the word. Last week Kat went on a school trip with a group of blind children on a summer camp to Tiberias. They had permission yet they were still denied exit through the Gilo check point. Perhaps these blind children were also a threat to the security of Israel? Yet, they were allowed out of the other check point. One can only assume that the effort was intended to cause aggravation, delays and to humiliate and belittle these people further. Which reminds me – now Palestinians without an Israeli or Jerusalem ID card need permission to leave if they want to travel into Jerusalem or elsewhere not in the West Bank. This permission can often take several days to obtain, and often it is also denied with no reasons given.

There is so much to say, and too little time and too many stresses.

This entry was posted on 27 July, 2008 by peoplesgeography.com in Apartheid, Israel, Occupation, Palestine, People and tagged Bethlehem, checkpoints.