Meir Margalit recently declared that the zionist project was all but over. To be sure, this was not because of the moral bankruptcy of the occupation of Palestinian territories and the disaster this is causing. Rather, it was pronounced because the Israeli Hight Court recently handed down a response that the state is not responsible for providing absolute security to its residents (in this case Sderot) who filed a suit to have their houses fortified against low-lethality, relatively primitive Qassams.

Margalit connects the dots between this decision and its significance for sounding the clear death knell of the zionist project (editorial emphasis mine):

… after mountains of declarations stating and re-stating the need for a secure haven for the Jewish people, the State now declares: too bad, but we cannot provide that secure haven that the founders of Zionism promised in their time. … For a long time now it has been clear to us that the Zionist “conception” had collapsed. Jews in the Diaspora live in much greater security than the Jews of Israel, and paradoxically, in the Jewish state, which was created to defend us from various kinds of afflictions, more Jews are killed than any other place in the world.

The Zionist establishment is indeed alive and kicking, but that is the wont of giant institutions that refuse to dismantle themselves, especially as the Zionist idea is still a useful lever for mobilizing money in the Diaspora. The Zionist movement continued to stand on its foundations but it was devoid of substance, and it was only a matter of time until it collapsed in on itself. But in the surprising reply of the State lawyers, which was intended merely to save a little money for the State treasury, the State exposed the real truth in its full cruelty: we are not able to fulfill the promise of the Zionist movement to set up a corner of the world in which Jews can live in safety.

… It does indeed appear that the leaders of the State have recently woken up to the dangers involved in perpetuating the occupation, but we have not yet seen any practical action to stop the deterioration.

Meanwhile, the unconscionable siege of Gaza and the creeping growth of illegal Jew-only settlements in the occupied West Bank continues, as Palestinians bear the brunt of the Israeli state’s intransigence and moral decay. 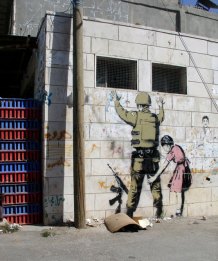 For less than four dollars an hour, the Jewish teenagers removed furniture, clothes, kitchenware and toys from the homes and loaded them on to trucks. As they worked diligently alongside the many policemen who had come to secure the destruction of 30 houses in two unrecognised Bedouin villages, Bedouin teenagers stood by watching their homes being emptied. When all the belongings had been removed, the bulldozers rapidly destroyed the homes. All those present, Jews and Bedouins, were Israeli citizens; together they learned an important lesson in the discrimination characterising civic life in the Jewish state.

The current demolitions are part of a strategy that began with the foundation of the state of Israel. Its ultimate objective is the Judaisation of space. Read MORE.

It could, rightfully, be a cause of shame to the world. But the world, besieged by violence and injustice, hardly notices it. The people of Gaza, 1.4 million of them, are slowly and purposely being deprived of basic foods and medicines by the so called civilized countries in the West and there is hardly a protest. And all this happens because the people in Gaza want to be free and independent. Never mind that in the process children and innocent civilians are killed or families dispossessed. Read MORE

The ICRC said that the Israeli closure of all borders in and out of the Gaza Strip is affecting every aspect of the Palestinian people’s lives. “The Palestinian Territories face a deep human crisis, where millions of people are denied their human dignity. Not once in a while, but every day”, said the statement.

In addition to the 80% unemployment rate in Gaza brought about by the Israeli closure, the ICRC pointed out that 5,000 farmers in Gaza dependent on exports of cash crops like carnations and strawberries were “about to suffer a 100 percent drop in sales.” Read MORE

A report released today by the World Bank warns that even if the donor countries meet all of the PA’s demands for aid, the Palestinian economy will continue to deteriorate if Israel does not alter mobility and trade restrictions in the West Bank. Read MORE.

Gush Shalom, A call from Gaza: BREAK THE SIEGE!, 14 Dec

A shocking first-hand report about living conditions in the Gaza Strip was delivered Thursday (Dec. 13, 2007) to a group of Israeli peace activists. They met in the Gush Shalom office in Tel-Aviv to listen to the testimony of Dr. Eyad Sarraj, one of the few people who still succeed in getting out of the “largest prison on earth”. Dr. Sarraj, well-known psychiatrist and human rights activist, lives in the Strip. … This is what he reported:

Local water is undrinkable. Israel does not let in bottled water. Nor does Israel allow the importation of water pumps. The price of water filters has gone up from 150 NIS to 1000 NIS, there are no spare parts at all for filters. Only the well-to-do can still afford them. …

Israel prevents all imports into the strip, except a small list of about a dozen basic products. Before, 900 trucks were employed daily for the imports and exports of the Gaza Strip, now these are reduced to 15. For example, no soap is allowed in.

There is no cement. When there is a hole in the ceiling, it cannot be repaired. It is impossible to go on building the children’s hospital which has been begun. …

The severely sick cannot reach a hospital – neither in Israel, nor in Egypt or Jordan. The few permits issued are often delivered after a fatal delay. In many instances, patients are condemned to death.

Students cannot reach their universities abroad. Foreign citizens who happened to stay in Gaza cannot get out if they have a Palestinian ID. Palestinians who have contracts to work abroad are not allowed to leave. …

Practically all enterprises have been closed for lack of raw materials. … All prices in the Gaza strip have risen sky-high – fivefold and even tenfold. Life is now more expensive in Gaza than in Tel-Aviv. Read MORE.

Uri Avnery, To Die With The Philistines?, Gush Shalom, 16 December

For months now, the political and military leaders of Israel have been discussing the “big operation”: a massive invasion of the Gaza Strip in order to put an end to the launching of rockets into Israel. …

As will be remembered, Sharon dismantled the settlements and evacuated the Strip without a dialogue with the Palestinians and without turning the territory over to the Palestinian Authority. He did not leave the inhabitants of the Strip any possibility of leading a normal life, but turned the territory into a giant prison. All connections with the outside world were cut – the Israeli navy cut the sea lanes, the border with Egypt was effectively sealed, the airport remained destroyed, the building of a harbor was prevented by force. The promised “safe passage” between the Strip and the West Bank was hermetically sealed, all crossings in and out of the Strip remained under total Israeli control, to be opened and closed arbitrarily. The employment of tens of thousands of Gazan workers in Israel, on which the livelihood of almost the entire Strip depended, was terminated.

The next chapter was inevitable: Hamas took military control over the Strip, without the helpless politicians in Ramallah being able to intervene. From the Strip, Qassam rockets and mortar shells were launched at the neighboring Israeli towns and villages, without the Israeli army being able to stop them. One of the most powerful armies in the world, with the most sophisticated weapons, is unable to counter one of the most primitive weapons on earth.

AN ORDINARY Israeli has no idea of what is happening in the Gaza Strip. The disconnection is absolute. No Israeli can enter the Strip, almost no Palestinian can get out.

This is the way most Israelis see things: We left Gaza. We dismantled all the settlements there, in spite of the fact that this caused us a profound national crisis. And what happens? The Palestinians just keep shooting at us from inside the strip and turn life in Sderot into hell. We have no alternative but to turn their lives, too, into hell, in order to get them to stop. …

IS THERE another way out besides a massive invasion? Of course there is. But it requires imagination, boldness and a readiness to act contrary to established patterns.

An immediate cease-fire can be achieved. According to all the indications, Hamas, too, is ready for it, provided that it is general: both sides must stop all military actions, including “targeted liquidations” and the launching of Qassams and mortar shells. The crossings must be opened for free movement of goods in both directions. The passage between the Strip and the West Bank must be opened, as well as the border between the Strip and Egypt.

Amira Hass (trans. from Hebrew by George Malent), Where are the suicide bombers?, Kibush, Dec 2007

It is an accepted cliché among some so-called radicals that army attacks in which Palestinian civilians are harmed – which are routine occurrences that pass below the Israeli radar – always create “the next suicide bomber”. The truth is that nearly every Palestinian has many reasons to be fed up with life to the point of suicide and thoughts of revenge, and those thoughts are not linked only to military attacks. Even without killing, the Israeli occupation regime kills – hope, plans, relationships, ways of life.

The attachment people have to their harsh lives is more than just the instinct for survival or a default option. In it is a constant lesson to those Israelis who are planning for “transfer” overtly or covertly: the large majority of Palestinians knows that oppressive regimes come and go, but they will stay on their land. Consciously.