Updated: 2 additional videos from The Chaser and Bums Not Bombs – see also Green Left Weekly for a collection of videos; for less than sanguine write-ups about police powers and provocations during the protests see Adele Horin and Richard Neville. 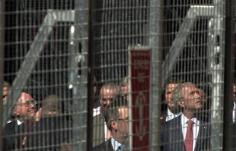 Yes, APEC is in town. Sydney’s central business district has gone into full lock-down, with a surfeit of security and a 5.5-kilometre steel-and-concrete fence (pictured) inside the APEC fortress within the CBD for the week.

There is now the full contingent of 21 APEC heads of state in Sydney for the annual leaders’ meeting of the Asia-Pacific Economic Cooperation (APEC). Putin’s in town — the first currently serving leader from Russia ever to visit; Bush has been here since Tuesday after his unannounced stopover in Iraq, about which he delusionally reported “We’re kicking ass“; Harper (Canada), Bachelet (Chile), Jintao (China), and Abe (Japan) are also among the 21 world leaders.

A very brief backgrounder: APEC has been called ‘four adjectives in search of a noun’ — it encompasses an enormously diverse region in terms of population, wealth and culture, with APEC member countries representing half the world’s population and about half of world GDP (see APEC membership map, right). The APEC forum is obviously important for Australian commerce: 70% of Australia’s trade is with APEC member states and 8 out of 10 Australia’s top ten trading partners are APEC members.

APEC 2007 is a forum for trade, energy, security and other issues. It is neither a binding agreement such as NAFTA nor is it an international body with the right to adjudicate claims between members and impose sanctions, such as the World Trade Organization (WTO), the neoliberal river for which APEC seems to be a tributary. So far, APEC seems to demonstrate that bilateralism is the new multilateralism, with a few key deals stitched up during the summit: Australia is to sell uranium to Russia, and Russia will sell $1.5 billion worth of submarines and arms to Indonesia.

Locally, the Australian Prime Minister John Howard hopes this forum will boost his flagging electoral chances which are at an all-time low, yet hob-nobbing with his friend Dubya isn’t doing him much good so far. Meanwhile, Australian Labor Opposition Leader Kevin Rudd is impressing China’s President Hu Jintao with his fluent Mandarin.

Here’s a snapshot of some of the protests, street theatre and satirical stunts during APEC 2007 thus far:

As co-organiser Will Saunders told the crowd: “There’s many ways of making a point, this just happens to be the Australian way. Just because you feel strongly about an issue doesn’t mean you can’t laugh about it.” Saunders first came to public attention in March 2003 during the lead up to the Iraq war, part of a duo who painted ‘No War’ in bright red letters on the main sail of the Sydney Opera House. 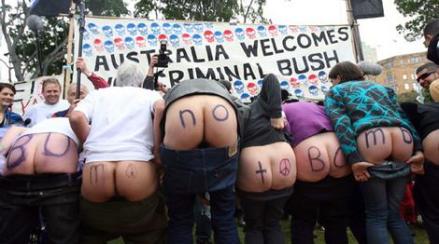 Ahead of the major protest planned for Saturday where several thousand are expected to converge, a few hundred high school students — and even some of their parents — took to the streets mid-week.

The Chaser team are a group of satirists who have a television program, Chaser’s War on Everything, with Australia’s national public broadcaster, the ABC. They have proved to be APEC’s most effective court jesters, impersonating the Canadian delegation and employing a faux motorcade that actually breached security yesterday. The Chaser’s Chris Taylor said there was “no particular reason” they had chosen Canadian flags. “We just thought they’d be a country who the cops wouldn’t scrutinise too closely, and who feasibly would only have three cars in their motorcade – as opposed to the 20 or so gas-guzzlers that Bush has brought with him.” Another of the Chasers, Chas Licciardello, staged a stunt dressed as Osama Bin Laden: 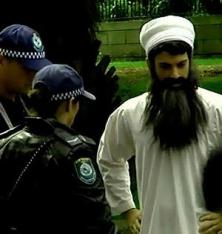 Here’s a video clip of one of their pranks of impersonating a security officer this week, followed by one of their best known send-ups filmed in the US. Though I’ve found it funny and many friends have posted it, I’ve resisted doing so because I felt it denigrates the dignity of the ordinary person for whom I have rather more regard than those who abuse power. Nevertheless, enjoy the humour of these cherry-picked responses.