Dan Brook imaginatively writes about the discovery of a new element: Capitalisium –

Capitalisium is a very volatile, dynamic, and toxic element, containing 1 positron, 1 neutron, and 1 huge electron along with boards of electrons, various vice electrons, hundreds of executive electrons, thousands of mid-level electrons, and millions of satellite electrons, and it appears to be growing over time, therefore always increasing its already heavy atomic weight. In spite of its constant growth, Capitalisium’s nucleus is clearly on the right, yet the element is remarkably self-centered.

… Capitalisium is way larger than any other element, indeed possibly larger than all others combined, and it constantly seeks to incorporate or otherwise use the other elements to power itself. Indeed, about half the world’s power is already stored up in a mere 2% of elements — which happens to be mostly Capitalisium. To accomplish this, Capitalisium seems to use a vast and complex network of proleterions and peons, overseen by bossons, greedons, scamons, and other exploitatrons, all of which are filtered through mass marketrons. This process tends to create a small albeit caustic class of free market radicals, which spread globally and are highly corrosive to Democracium (Dm).

While consuming the energy of other elements, Capitalisium produces some necessities, but also a tremendous amount of junk and waste, which often mimic the look of necessities. Capitalisium also emits massive and unsustainable quantities of carbon dioxide (CO2), methane (CH4), and nitrous oxide (N2O), the major greenhouse gases that contribute to global warming, which may be the market’s biggest externality. Without Governmentium (Gv) and Democracium (Dm), Capitalisium may eventually destroy itself and possibly the other elements as well. Capitalisium does not care what it produces, whether soybeans or cyanide, love beads or lead bullets, necessities or waste, as long as it also produces highly-charged profitrons. Profitrons seem to materialize through the efforts of proleterions and peons acting upon other elements, catalyzed by the class of exploitatrons. Proleterions and peons do not accumulate any profitrons, shifting their surplus power to the exploitatrons instead. 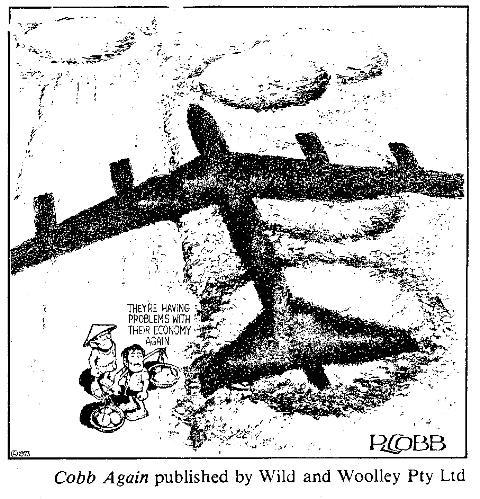 Due to the fact that Capitalisium has only one positron yet so many powerful electrons, it is a highly negative force, often converting other positive and neutral elements into more negative behaviors. Paleosociological research suggests that Capitalisium was originally a positive force, but having long passed its useful half life, it is now solidly negative. Capitalisium becomes especially potent when it is combined with Governmentium, in some cases forming the highly noxious Imperialisium (Im) and the extremely deadly Fascisium (Fs). While these should be studied theoretically to devise better protective and containment gear, they should never be released from the books and laboratories back into society.

When interacting with other elements and molecules, which it aggressively seeks to do, Capitalisium inevitably makes a few grow much larger while simultaneously decreasing the size and strength of the majority. The bigger few tend to become strongly aligned with Capitalisium; however, even many of the weaker ones also align themselves with Capitalisium, seducing other elements to falsely believe it is in their best interest. Many researchers are puzzled by this paradoxical phenomenon.

Socialisium (So) has been suggested as an antidote to eliminate the toxicity of Capitalisium, but the potency and efficacy of this element are still being debated.

Dan Brook, Ph.D., teaches sociology at San Jose State University and is the co-author of Understanding Society (2007) and author of Modern Revolution (2005) as well as many articles for the non-corporate media. More information about him is at www.brook.com/dan and he welcomes comments at [email protected].