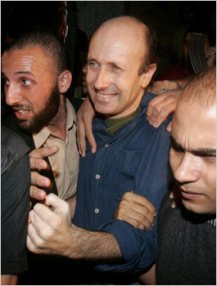 Good news just in that Hamas has secured the release of BBC journalist Alan Johnston in Gaza.

Johnston, the only western correspondent working full-time in Gaza, was held captive for three months by a previously little known and shadowy group connected with the Dagmoush clan in Gaza.

Johnston has been the centre of a worldwide campaign by colleagues — Palestinian, Israeli and international — to secure his release. The democratically elected Hamas government, shunned and branded as terrorists by the US, EU and Israeli neocons, had pledged to secure his release from the start of his capture.

Johnston was kidnapped from a Gaza City street on March 12, with his captivity lasting 114 days. On Tuesday, Hamas police surrounded the building of the shadowy group holding Johnston in the Sabra district of Gaza City, stepping up the pressure to secure his release.

No such happy ending for one of the latest civilian victims of Israeli violence, teenager Mohammed Al-Sahafi, shot dead by Israeli troops in Hebron on the West Bank on Tuesday evening after they mistook a toy rifle he was carrying for a real gun.

Meanwhile we also learn that nuclear whistleblower Mordechai Vanunu has again been sentenced to prison, for the crime of talking to foreigners. He is also subject to close surveillance and not allowed to leave Israel. “This is a cruel sentence in a case that has nothing to do with national security or social values. It’s a measure of the vindictiveness of the state of Israel,’’ Vanunu’s lawyer Michael Sfard told Reuters.

The major argument for boycotting Israel is that it is the right thing to do. And it is. But for those of us who live off wages and depend on public services, it is also the smart thing to do — especially in Europe, where the BDS campaign is now facing a vocal onslaught. Support for Israel is an important pillar of an islamophobic, anti-immigrant and pro-war front, which includes many in the political leadership of Europe; their final prize is finishing off the welfare state. In the second part, I will also show that it is this front — not the UCU — that is heir to Europe’s historical anti-Semitism.

The Hamas-Fatah clash that has culminated into a mini-civil war in recent weeks is both old and new, and while some of its elements are uniquely Palestinian, much of it was manufactured at the behest of US-Israeli intelligence and governments.

Israel was born at midnight May 14, 1948. The U.S. recognized the new state 11 minutes later. The two countries have been locked in a deadly embrace ever since. Washington, at the beginning of the relationship, was able to be a moderating influence. An incensed President Eisenhower demanded and got Israel’s withdrawal after the Israelis occupied Gaza in 1956. During the Six-Day War in 1967, Israeli warplanes bombed the USS Liberty. The ship, flying the U.S. flag and stationed 15 miles off the Israeli coast, was intercepting tactical and strategic communications from both sides. The Israeli strikes killed 34 U.S. sailors and wounded 171. The deliberate attack froze, for a while, Washington’s enthusiasm for Israel. But ruptures like this one proved to be only bumps, soon smoothed out by an increasingly sophisticated and well-financed Israel lobby that set out to merge Israeli and American foreign policy in the Middle East.

As one of Palestine’s principal land and sea gates to the world, [Gaza historically] tended to develop a more flexible and cosmopolitan way of life; not dissimilar to other gateways societies in the Eastern Mediterranean in the modern era. This location near the sea and on the Via Maris to Egypt and Lebanon brought with it prosperity and stability until this life was disrupted and nearly destroyed by the Israeli ethnic cleansing of Palestine in 1948.

In between 1948 and 1967, Gaza became a huge refugee camp restricted severely by the respective Israeli and Egyptian policies: both states disallowed any movement out of the Strip. Living conditions were already harsh then as the victims of the 1948 Israeli politics of dispossession doubled the number of the inhabitants who lived there for centuries. On the eve of the Israeli occupation in 1967, the catastrophic nature of this enforced demographic transformation was evident all over the Strip. This once pastoral coastal part of southern Palestine became within two decades one of the world’s densest areas of habitation; without any adequate economic infrastructure to support it.

… And a final small portion of food for thought. There are quite a few Jewish mothers and wives in the Gaza Strip — some sources within Gaza say up to 2000 — married to local Palestinians and parents to their children. There are many more Jewish women who married Palestinians in the Palestine countryside. An act of desegregation that both political elites find difficult to admit, digest or acknowledge. If despite the colonization, occupation, genocidal policies and dispossession such harmonies of love and affection were possible, imagine what could happen if these criminal policies and ideologies would disappear. When the Wall of Apartheid is removed and the electric fences of Zionism dismantled — Gaza will become once more a symbol of Fernand Braudel’s coastal society, able to fuse different cultural horizons and offer a space for new life instead of the war zone it has become in the last sixty years.

… Orientalist fantasies of the so-called exceptionalism of the Palestinian situation are being offered by Western pundits and their Palestinian and Arab “secular,” read pro-American, counterparts. These experts seem to have forgotten the history of collaboration among the oppressed amidst tragedy and oppression, from the Judenrats and the Kapos, to Vietnam’s Thieu, Angola’s UNITA, South Africa’s Buthelezi, Mozambique’s RENAMO, Nicaragua’s Contras, and Lebanon’s South Lebanese Army under Saad Haddad and Antoine Lahd. The Palestinian situation is indeed the rule and not the exception. The only exception that the Middle East offers to world politics is the disproportionate imperial interest that its oil has attracted, and the unprecedented international support given to its Jewish settler colony, the two being intrinsically connected. It is not the Arab world that is exceptional but American strategy in the region and the anachronistic nature of its Jewish settler-colony.