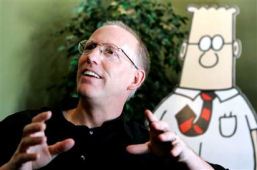 A Feeling I’m Being Had

I was happy to hear that NYC didn’t allow Iranian President Ahmadinejad to place a wreath at the WTC site. And I was happy that Columbia University is rescinding the offer to let him speak. If you let a guy like that express his views, before long the entire world will want freedom of speech.

I hate Ahmadinejad for all the same reasons you do. For one thing, he said he wants to “wipe Israel off the map.” Scholars tell us the correct translation is more along the lines of wanting a change in Israel’s government toward something more democratic, with less gerrymandering. What an ass-muncher!

Ahmadinejad also called the holocaust a “myth.” F*ck him! A myth is something a society uses to frame their understanding of their world, and act accordingly. It’s not as if the world created a whole new country because of holocaust guilt and gives it a free pass no matter what it does. That’s Iranian crazy talk. Ahmadinejad can [bleep] me.

Furthermore, why does an Iranian guy give a speech in his own language except for using the English word “myth”? Aren’t there any Iranian words for saying a set of historical facts has achieved an unhealthy level of influence on a specific set of decisions in the present? He’s just being an asshole.

Ahmadinejad believes his role is to pave the way for the coming of the Twelfth Imam. That’s a primitive apocalyptic belief! I thank Jesus I do not live in a country led by a man who believes in that sort of bullshit. Imagine how dangerous that would be, especially if that man had the launch codes for nuclear weapons.

The worst of the worst is that Ahmadinejad’s country is helping the Iraqis kill American soldiers. If Iran ever invades Canada, I think we’d agree the best course of action for the United States is to be constructive and let things sort themselves out. Otherwise we’d be just as evil as the Iranians. Those f*ckers.

Those Iranians need to learn from the American example. In this country, if the clear majority of the public opposes the continuation of a war, our leaders will tell us we’re terrorist-humping idiots and do whatever they damn well please. They might even increase our taxes to do it. That’s called leadership.

If Ahmadinejad thinks he can be our friend by honoring our heroes and opening a dialog, he underestimates our ability to misinterpret him. F*cking idiot. I hate him.

This entry was posted on 5 October, 2007 by Ann in Cartoonists, Humor, Humour, Iran, Satire, US Foreign Policy, USA.