First, sarcastic humour alert. You may know that the supremely representative UN Security Council has voted to go ahead with a spurious court to prosecute the murder two years ago of former Lebanese prime minister Rafiq al-Hariri (a.k.a. Let’s Pin the Blame on Syria—one must question why the murder of Hariri merits an international tribunal but the war launched by Israel against Lebanon last year does not, nor the other well known cases of “targeted assassinations” by the US or Israel).

Ten council members voted for the US, France and UK sponsored U.N. resolution that would unilaterally establish a tribunal to investigate the 2005 Hariri murder.

Five countries abstained: Russia, China, Indonesia, Qatar, and South Africa, who argued that the council was exceeding its authority and interfering in Lebanese affairs (PM Foaud Siniora wants the Tribunal but Lebanon’s Parliament had not approved it).

This tongue-in-cheek commentary about the Tribunal is courtesy As’ad Abu Khalil of the Angry Arab News Service (see yet another instance of the sarcastic humour here, in two short lines: KAPOW! At least we Lebanese can laugh at ourselves).

It was ironic to watch the quasi-debate at the United Nations Security Council today. Was it amusing to watch the delegate of South Africa defend the Lebanese constitution and sovereignty while the Lebanese delegate was pleading for the UN to violate the sovereignty of Lebanon? Lebanon today has the equivalent of Babrak Karmal government.

The UNSC council has just passed a resolution to establish an international tribunal to find and punish the killers of Rafiq Hariri.

As is well-known, this tribunal will

1.) end all manners of Syrian intervention in Lebanon;

3.) force the Lebanese to love one another;

4.) will also produce unprecedented prosperity for all the Lebanese;

5.) will address the underlying causes of all conflicts in Lebanon;

6.) will undermine sectarianism in society and in the Lebanese political system;

7.) will end the massive corruption that plagues the Lebanese administration;

8.) will ensure that all Lebanese groups and militias are disarmed;

9.) will defeat the Iranian plot in the region.

However, the tribunal, as is well-known, will not find nor will it punish the killers of Rafiq Hariri although the UN investigative team is examining soil samples in Saudi Arabia. Stay tuned.

On a more serious and less superficial note, AbuKhalil hypothesises that the Hariri-Bandar-Bush (Bush being shorthand for Cheney, Abrams and the US neocons) plans spearhead a shift in the power game dynamic, particularly in attitudes toward Iran. The twists and turns that are being played out are certainly confusing seasoned observers and neophytes alike. AbuKhalil draws upon AUB academic Ahmad Musalli who thinks the status of Fatah al-Islam has been changed from friend to foe because a “deal” was brokered with Iran, so the shadowy militia group were cut loose. If so, will the deal with Iran, too, be cut loose when political expediency changes course?

As Chris Floyd writes, these expendable militia groups are pawns in a deadly game that is creating chaos and causing casualties in an already battered region. Neocons continue their destructive policies of bumbling regional re-design, benefiting nobody but the corporate war profiteers. “Fight al Qaeda in Iraq; fund al Qaeda in Lebanon; arm and train Shiite militias and death squads in Iraq, then fight Shiite militias and death squads in Iraq — what’s the difference, as long as the game goes on, the waters stay murky with blood, and the war profits keep rolling in?”

Subversive cartoons follow — so subversive I’ve tucked them away after the ‘More’ jump.

In a parallel universe: 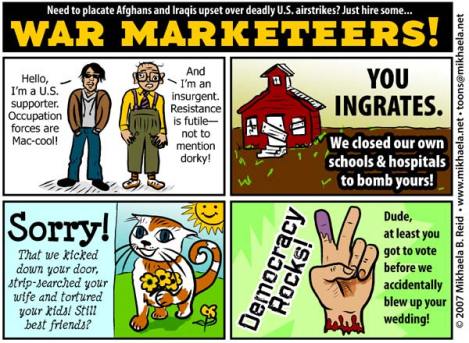