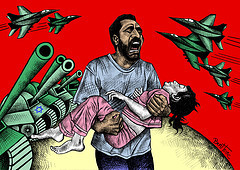 Uri Avnery provides a peace and Israeli perspective on the consequences and failings of Israel’s Winograd Inquiry Report into last year’s war on Lebanon.

He is none too optimistic about what the findings bode for the region and this is reflective in the Report in part by how it frames a political problem in misguidedly militaristic terms.

The Report for him bespeaks of likely further belligerency against its neighbours in the near future, and the further militarisation of Israeli society and the rank corruption in the IDF.

The Report is also damning in its glaring omissions — hardly anything about the impact on Lebanon itself — and for what it says about US involvement and the Bush administration’s enablement of these monstrous events.

This is how he reads the findings; boldface emphasis is mine:

Now, after the first excitement caused by the publication of the partial report has died down, it is possible to evaluate it. The conclusion is that it has done much more harm than good.

The positive side is well known. The committee has accused the three directors of the war – the Prime Minister, the Minister of Defense and the Chief-of-Staff – of many faults. The committee’s favorite word is “failure”.

It is worthwhile to ponder this word. What does it say? A person “fails” when he does not fulfill his task. The nature of the task itself is not considered, but only the fact that it has not been accomplished.

The use of the word “failure” all over the report is by itself a failure of the committee. The new Hebrew word invented by the protest groups – something like “ineptocrats” – fits all of the five committee members.

IN WHAT did the three musketeers of the war leadership fail, according to the committee?

The decision to go to war was taken in haste. The war aims proclaimed by the Prime Minister were unrealistic. There was no detailed and finalized military plan. There was no orderly staff-work. The government adopted the improvised proposal of the Chief-of-Staff at it was, without alternatives being offered or requested. The Chief-of-Staff thought that he would win by bombing and shelling alone. No ground attack was planned. The reserves were not called up in time. The ground campaign got off very late. In the years before the war, the forces were not properly trained. Much equipment was missing from the emergency stores. The big ground attack, which cost the lives of so many soldiers, started only when the terms of the cease-fire were already agreed upon in the UN.

Strong medicine. What is the conclusion? That we must learn these lessons and improve our performance quickly, before we start the next war.

And indeed, a large part of the public drew precisely this conclusion: the three “ineptocrats” have to be removed, their place has to be filled by three leaders who are more responsible and “experienced”, and we should then start Lebanon War III, so as to repair the damage caused by Lebanon War II.

The army has lost its deterrent power? We shall get it back in the next war. There was no successful ground attack? We shall do better next time. In the next war, we shall penetrate deeper.

The entire problem is technical. New leaders with military experience, orderly staff-work, meticulous preparations, an army chief from the ranks of the ground forces instead of a flying commander – and then everything will be OK.

THE MOST important part of the report is the one that is not there. The report is full of holes, like the proverbial Swiss cheese.

There is no mention of the fact that this was from the start a superfluous, senseless and hopeless war.

Such an accusation would be very serious. A war causes death and destruction on both sides. It is immoral to start one unless there is a clear danger to the very existence of the state. According to the report, Lebanon War II had no specific aim. That means that this war was not forced on us by any existential necessity. Such a war is a crime.

What did the trio go to war for? In theory: in order to free the two captured soldiers. This week, Ehud Olmert admitted publicly that he knew quite well that the soldiers could not be freed by war. That means that when he decided to start the war, he blatantly lied to the people. George Bush style.

For these problems, political solutions could be found. It was clear then, as it is now, that the prisoners must be freed through a prisoner exchange deal. The Hizbullah threat can be removed only by political means, since it stems from political causes.

Hizbullah is primarily a political organization, a part of the complex reality of Lebanon. For centuries, the Shiites in South Lebanon were downtrodden by the stronger communities – the Maronites, the Sunnis and the Druze. When the Israeli army invaded Lebanon in 1982, the Shiites received them as liberators. After it became apparent that our army did not intend to go away, the Shiites started a war of liberation against them. Only then, in the course of the long and ultimately successful guerilla war, did the Shiites emerge as a major force in Lebanon. If there were justice in the world, Hizbullah would erect statues of Ariel Sharon.

In order to strengthen their position, the Shiites needed help. They got it from the Islamic Republic of Iran, the natural patron of all the Shiites in the region. But even more important was the help coming from Syria.

Syria has never given up its foothold in Lebanon. In the eyes of the Syrians, Lebanon is an integral part of their homeland, which was torn from it by the French colonialists. A look at the map is sufficient to show why Lebanon is so important for Syria, both economically and militarily. Hizbullah provides Syria with a stake in the Lebanese arena.

The encouragement and support of Hizbullah as a threat against Israel is even more important for Syria. Damascus wants to regain the Golan Heights, which were conquered by Israel in 1967. This, for Syrians, is a paramount national duty, a matter of national pride, and they will not give it up for any price. They know that for now, they cannot win a war against Israel. Hizbullah offers an alternative: continual pinpricks that are intended to remind Israel that it might be worthwhile to return the Golan.

Anyone who ignores this political background and sees Hizbullah only as a military problem shows himself to be an ignoramus. It was the duty of the committee to say so clearly, instead of prattling on about “orderly staff-work” and “military alternatives”. It should have issued a red card to the three ineptocrats for not weighing the political alternative to the war: negotiations with Syria for neutralizing the Hizbullah threat by means of an Israeli-Syrian-Lebanese accord. The price would have been an Israeli withdrawal from the Golan heights.

By not doing so, the committee really said: there is no escape from Lebanon War III. But please, folks, try harder next time.

A CONSPICUOUS hole in the report concerns the international background of the war.

George Bush had an interest in this war. He was (and is) stuck in the Iraqi morass. He is trying to put the blame on Syria. Therefore he wanted to strike a blow against Damascus. He also wanted to break the Lebanese opposition, in order to help America’s proxy in Beirut. He was sure that it would be a cakewalk for the Israeli army.

When the expected victory was late in coming, American diplomacy did everything possible to prevent a cease-fire, so as to “give time” to the Israeli army to win. That was done almost openly.

How much did the Americans dictate to Olmert the decision to start the war, to bomb Lebanon (but not the infrastructure of the Siniora government), to prolong the war and to start a ground offensive at the last moment? We don’t know. Perhaps the committee dealt with this in the secret part of the report. But without this information it is impossible to understand what happened, and therefore the report is to a large extent worthless for understanding the war.

WHAT ELSE is missing in the report? Hard to believe, but there is not a single word about the terrible suffering inflicted on the Lebanese population.

Under the influence of the Chief-of-Staff, the government agreed to a strategy that said: let’s bomb Lebanon, turn the life of the Lebanese into hell, so they will exert pressure on their government in Beirut, which will then disband Hizbullah. It was slavish imitation of the American strategy in Kosovo and Afghanistan.

This strategy killed about a thousand Lebanese, destroyed whole neighborhoods, bridges and roads, and not only in Shiite areas. From the military point of view, that was easy to do, but the political price was immense. For weeks pictures of the death and destruction wrought by Israel dominated world news. It is impossible to measure the damage done to Israel’s standing in world public opinion, damage that is irreversible and that will have lasting consequences.

All this did not interest the committee. It concerned itself only with the military side. The political side it ignored, except to remark that the Foreign Minister was not invited to the important consultations. The moral side was not mentioned at all.

Nor is the occupation mentioned. The committee ignores a fact that cries out to heaven: that an army cannot be capable of conducting a modern war when for 40 years it has been employed as a colonial police force in occupied territories. An officer who acts like a drunken Cossak against unarmed peace activists or stone-throwing children, as shown this week on television, cannot lead a company in real war. That is one of the most important lessons of Lebanon War II: the occupation has corrupted the Israeli army to the core. How can this be ignored?

THE COMMITTEE judges Olmert and Peretz as unfit because of their lack of “experience”, meaning military experience. This can lead to the conclusion that the Israeli democracy cannot rely on civilian leaders, that it needs leaders who are generals. It imposes on the country a military agenda. That may well be the most dangerous result.

This week I saw on the internet a well-done presentation by the “Reservists”, a group of embittered reserve soldiers set up to lead the protest against the three “ineptocrats”. It shows, picture after picture, many of the failures of the war, and reaches its climax with the statement that the incompetent political leadership did not allow the army to win.

The young producers of this presentation are certainly unaware of the unpleasant smell surrounding this idea, the odor of the “Dolchstoss im Ruecken” – the stab in the back of the army. Otherwise they would probably not have expressed themselves in this form, which served not so long ago as the rallying cry of German Fascism.