Predatory Capitalism and Militarism in the USA 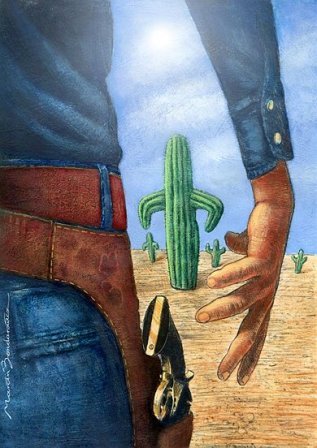 This piece by Stephen Lendman on the domestic costs of Empire packs quite a punch, carried by the strength of the facts presented by these social and economic indicators. Lendman does more than recite a litany of disaster figures, however, he proffers prescriptions: grassroots regime change. Impeach the war criminals!

It is excerpted from a longer entry: A Look Back and Ahead In An Age of Neocon Rule (27 Dec)

For a related article that recognizes culpability in both branches of the War Party, see US Democrats Expected to Increase U.S. Military Spending in 2007

Thanks to BlueBear, an excellent link from John Dean on Refocusing the Impeachment Movement. See also the campaign being promoted by Portland Indymedia ***

The Cost to a Society Based on Predatory Capitalism and Out-of-Control Greed, Corruption and Militarism

The societal breakdown in the US is a national disgrace and affects many millions. A sampling of some of it is listed below:

— Over 80 million in total have no health coverage during some portion of each year and most of them are employed.

— The Bush administration just proposed sweeping cuts in payments to pharmacies to reduce the Medicaid benefits 50 million poor in the country rely on, can’t afford to make up the difference for on their own, and may have to forego medications they vitally need if pharmacies won’t fill prescriptions at lower prices.

— The US ranks 41st in infant mortality, and the World Health Organization (WHO) ranks the country 37th in the world in “overall health performance” and 54th in the fairness of health care despite spending at a current level overall of around $2 trillion a year or about double the amount per capita of the OECD countries that deliver superior health care overall to their citizens as a national priority.

— Well over 12 millions Americans struggle daily to feed themselves, and many thousands across the country can’t afford housing and are forced to sleep on the streets including in winter cold.

— A just released December 14 US Conference of Mayors report said these conditions continue to worsen based on a survey of 23 cities showing 7% more requests for food aid in 2006 following a 12% jump in 2005 during a period of economic growth.

— The same report showed requests for shelter rose 9% in 2006 with requests from families with children rising 5%.

— Public education is deliberately being eroded with illiteracy in basic reading, math and computer skills shamefully high and rising.

— The US prison population is the highest in the world at 2.2 million and increasing by 1000 a week, half of those in it are black, and half of the total prison population is there for non-violent offenses half of which are drug-related. The US prison system is a shameful Gulag and an affront to humanity. The appalling conviction and sentencing of first-time drug offender Weldon Angelos is but one of countless examples. He was convicted of three sales of marijuana in 2004 while in possession of a gun unrelated to the sale. Under the insane federal mandatory sentencing laws, he was sentenced to five years for the first offense and 25 years each for the other two totaling 55 years in federal prison or a likely life sentence if he’s forced to serve it all because he possessed and sold a few “joints” of a substance less harmful than legal cigarettes that kill millions yearly while it’s not known marijuana ever killed anyone using it. Only in America.

— The true state of things overall is suppressed by the dominant corporate-controlled media (including the NPR and PBS parts of it) functioning as a national thought-control police controlling all mass communication and depriving the public of any real information vital to a healthy democracy and their welfare.

— Racial segregation is as great as in the 1960s, and the national sport almost is demonizing Muslims as “terrorists, radicals, extremists and Islamofascists” and impoverished “people the color of the earth” Mexicans and Latin Americans as “illegal immigrant invaders polluting” our white western European society and culture, mindless that they only come el norte in desperate search of work because of the devastating effects of NAFTA on their lives that destroyed their ability to support their families.

Data from the Oakland Institute think tank specializing in social, economic and environmental issues shows that heavily subsidized US corn exports to Mexico have tripled since NAFTA came into force forcing two million Mexican corn farmers out of business, something that was predicted in advance but allowed to happen anyway. It also led to suicides but at a rate nowhere near the level globalized trade US-style had on farmers in India where as many as 100,000 of them have taken their own lives because “New World Order” indebtedness caused them to lose their farms and then everything else.

— Childhood poverty in the US ranks 22nd and next to last among developed nations when there should be virtually none tolerated in the richest country in the world or toleration of any of the other listed abuses.

What is imaginable in the year ahead and thenceforth is a world without George Bush and his neocon extremist administration leading the nation on a path to hell. Those wanting justice demand the Congress act to impeach him and the vice-president and then remove them from office allowing for the chance charges will be brought against them both and others in their administration so they’ll be held to account in the International Criminal Court (ICC) in the Hague or another judicial venue where officials may be prosecuted for war crimes, crimes against humanity and genocide. They committed them all and more against the people of Iraq, at least two of the three in Afghanistan, and a legion of others against the people of the United States and its Constitution.

It’ll only happen if it comes from the bottom up, from enough public outrage bubbling to the surface vocally demanding justice be served and the rule of law restored and again respected. No one at any level in public or private life should ever be allowed to get away with the kind of reckless and gross criminality that’s been rampant and out-of-control in Washington for the past six years under Republican neocon rule.

It’s long past time to put an end to this criminal class of rogues in charge, running the country like their private fiefdom in a culture of galling corruption and scorn for the law that exceeds anything here ever preceding their tenure. Already there’s a groundswell of growing outrage slowly building in size and intensity. As the new year approaches, it remains to be seen if a combination of those people of conscience can unite with enough others in the body politic to give us all what everyone should want and demand – an end to wars, a renewed respect for the law, accountability for those in government who violated it, and a commitment to serve the public interest with equity and equal justice for all in the true spirit of a real democracy restored from the grave and once again respected and cherished.

Stephen Lendman lives in Chicago and can be reached at [email protected]. Also visit his blog site at www.sjlendman.blogspot.com.

8 comments on “Predatory Capitalism and Militarism in the USA”