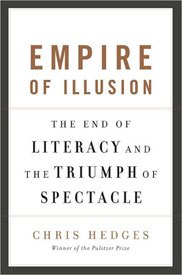 Author and journalist Chris Hedges discusses his new book, Empire of Illusion: The End of Literacy and the Triumph of Spectacle, which describes what he considers to be the economic, political and moral collapse of American culture. He is interviewed by Pulitzer Prize-winning writer Ron Suskind for C-Span’s ‘After Words’ Book TV. An excerpt from the book is available here and a lecture review worth a look here.

From the C-Span blurb (video here):

Chris Hedges talked about his book Empire of Illusion: The End of Literacy and the Triumph of Spectacle (Nation Books; July 13, 2009). In his book he describes what he considers to be the economic, political and moral collapse of American culture.

He argues that there are now two societies. The minority live in a print-based, literate world, that can cope with complexity and can separate illusion from truth. The growing majority is retreating from a reality-based world into one of false certainty and magic.

In this “other society,” serious film and theater, as well as newspapers and books, are being pushed to the margins.

Chris Hedges is a senior fellow at The Nation Institute and and the Anschutz distinguished fellow at Princeton University. He holds a Masters of Divinity from Harvard Divinity School.

A former foreign correspondent for the New York Times, he was part of the team that won a 2002 Pulitzer Prize for its coverage of global terrorism. He also received the 2002 Amnesty International Global Award for Human Rights Journalism. Mr. Hedges is author of Losing Moses on the Freeway and War Is a Force That Gives Us Meaning and writes for many publications including Foreign Affairs, Harper’s, The New York Review of Books, Granta, and Mother Jones. He is also a columnist for Truthdig.com.

This entry was posted on 15 October, 2009 by Ann in Audio, Books, Culture, Militarism, US Foreign Policy, USA and tagged Chris Hedges, Ron Suskind.