A Museum of Intolerance in Jerusalem 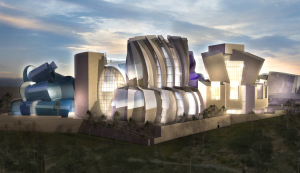 An excellent address by Saree Makdisi who was in Australia recently as the 2009 recipient of the Adelaide-based Edward Said Memorial Lecture (there is also a US-based Edward Said Memorial lecture series). The second half of this 60 minute address is particularly worthwhile. The introduction by journalist Antony Loewenstein is brief but if you’d like to skip ahead, move the cursor on the audio bar to about the six minute mark.

Makdisi’s presentation is on the construction of architect’s Frank Gehry’s Museum of ‘Tolerance’ in Jerusalem and he notably talks about the kind of politics of double erasure its construction entails. On another level, it is also symptomatic and representative of the whole programme of israeli apartheid. Download video (.mp4)

In 2004, construction began in Jerusalem on the local branch of the Los Angeles-based Museum of Tolerance, designed by the leading American architect, Frank Gehry [above: artists impression].

The museum is now being built over the remains of what had been the largest and most important Muslim cemetery in Palestine, which had been in continual use from the time of the Crusades up until 1948. The clash between the two competing claims to the same site offers a paradigmatic case to explore and rethink the conflict between Israel and the Palestinians, since all of the elements of the larger conflict are also in play in the struggle over this specific site.

The presentation is a precursor to a forthcoming paper that will be published in Critical Inquiry* later this year — well worth looking out for.

“The Architecture of Erasure,” forthcoming in Critical Inquiry.

2 comments on “A Museum of Intolerance in Jerusalem”

This entry was posted on 15 October, 2009 by Ann in Apartheid, Architecture, Audio, Israel, Palestine, Video and tagged Saree Makdisi.