This was Molly Ivins’ last column. May this shining light rest in peace. Thanks to Dean for forwarding the graphic by Sherffius from Cagle Cartoons.

In a less rousing, more tongue-in-cheek and cynical vein, see Micky Z.‘s only half-comical Top Ten Reasons Why the White Supremacist Capitalist Patriarchal Culture (WSCPC) Will Not be Toppled Any Time Soon. 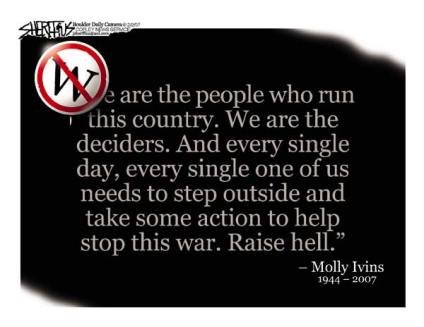 Bush gave us war – now give him hell for it

The purpose of this old-fashioned newspaper crusade to stop the war is not to make George W. Bush look like the dumbest president ever. People have done dumber things. What were they thinking when they bought into the Bay of Pigs fiasco? How dumb was the Egypt-Suez war? How massively stupid was the entire war in Vietnam? Even at that, the challenge with this misbegotten adventure is that we simply cannot let it continue.

It is not a matter of whether we will lose or we are losing. We have lost.

Gen. John P. Abizaid, until recently the senior commander in the Middle East, insists that the answer to our problems there is not military.

“You have to internationalize the problem. You have to attack it diplomatically, geo-strategically,” he said. His assessment is supported by Gen. George W. Casey Jr., the departing senior American commander in Iraq, and the Joint Chiefs of Staff, who only recommend releasing forces with a clear definition of the goals for the additional troops.

Bush’s call for a “surge” or “escalation” also goes against the Iraq Study Group.

Talk is that the White House has planned to do anything but what the group suggested after months of investigation and proposals based on much broader strategic implications.

About the only politician out there besides Bush actively calling for a surge is Sen. John McCain. In a recent opinion piece, he wrote: “The presence of additional coalition forces would allow the Iraqi government to do what it cannot accomplish today on its own — impose its rule throughout the country. . . . By surging troops and bringing security to Baghdad and other areas, we will give the Iraqis the best possible chance to succeed.”

But with all due respect to the senator from Arizona, that ship has long since sailed.

A surge is not acceptable to the people in this country — we have voted overwhelmingly against this war in polls (about 80 percent of the public is against escalation, and a recent Military Times poll shows only 38 percent of active military want more troops sent) and at the polls.
We know this is wrong. The people understand, the people have the right to make this decision, and the people have the obligation to make sure our will is implemented.

Congress must work for the people in the resolution of this fiasco.

Ted Kennedy’s proposal to control the money and tighten oversight is a welcome first step.

And if Republicans want to continue to rubber-stamp this administration’s idiotic “plans” and go against the will of the people, they should be thrown out as soon as possible, to join their recent colleagues.

Anyone who wants to talk knowledgably about our Iraq misadventure should pick up Rajiv Chandrasekaran’s “Imperial Life in the Emerald City: Inside Iraq’s Green Zone.” It’s like reading a horror novel. You just want to put your face down and moan: How could we have let this happen? How could we have been so stupid?

We are the people who run this country. We are the deciders. And every single day, every single one of us needs to step outside and take some action to help stop this war. Raise hell. Think of something to make the ridiculous look ridiculous. Make our troops know we’re for them and trying to get them out of there. Hit the streets to protest Bush’s proposed surge. . . . We need people in the streets, banging pots and pans and demanding, “Stop it, now!”