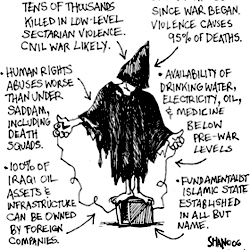 “The bad news,” investigative reporter Seymour Hersh told a Montreal audience last Wednesday, “is that there are 816 days left in the reign of King George II of America.”

The good news? “When we wake up tomorrow morning, there will be one less day.”

Hersh, a Pulitzer-prize winning journalist and regular contributor to The New Yorker magazine, has been a thorn in the side of the U.S. government for nearly 40 years. Since his 1969 exposé of the My Lai massacre in Vietnam, which is widely believed to have helped turn American public opinion against the Vietnam War, he has broken news about the secret U.S. bombing of Cambodia, covert C.I.A. attempts to overthrow Chilean president Salvador Allende, and, more recently, the first details about American soldiers abusing prisoners at Abu Ghraib prison in Iraq.

During his hour-and-a-half lecture – part of the launch of an interdisciplinary media and communications studies program called [email protected] – Hersh described video footage depicting U.S. atrocities in Iraq, which he had viewed, but not yet published a story about.

He described one video in which American soldiers massacre a group of people playing soccer.

“Three U.S. armed vehicles, eight soldiers in each, are driving through a village, passing candy out to kids,” he began. “Suddenly the first vehicle explodes, and there are soldiers screaming. Sixteen soldiers come out of the other vehicles, and they do what they’re told to do, which is look for running people.”

“Never mind that the bomb was detonated by remote control,” Hersh continued. “[The soldiers] open up fire; [the] cameras show it was a soccer game.”

“About ten minutes later, [the soldiers] begin dragging bodies together, and they drop weapons there. It was reported as 20 or 30 insurgents killed that day,” he said.

If Americans knew the full extent of U.S. criminal conduct, they would receive returning Iraqi veterans as they did Vietnam veterans, Hersh said.

“In Vietnam, our soldiers came back and they were reviled as baby killers, in shame and humiliation,” he said. “It isn’t happening now, but I will tell you – there has never been an [American] army as violent and murderous as our army has been in Iraq.”

Hersh came out hard against President Bush for his involvement in the Middle East.

“In Washington, you can’t expect any rationality. I don’t know if he’s in Iraq because God told him to, because his father didn’t do it, or because it’s the next step in his 12-step Alcoholics Anonymous program,” he said.

Hersh hinted that the responsibility for the invasion of Iraq lies with eight or nine members of the administration who have a “neo-conservative agenda” and dictate the U.S.’s post-September 11 foreign policy.

“You have a collapsed Congress, you have a collapsed press. The military is going to do what the President wants,” Hersh said. “How fragile is democracy in America, if a president can come in with an agenda controlled by a few cultists?”

Throughout his talk Hersh remained pessimistic, predicting that the U.S. will initiate an attack against Iran, and that the situation in Iraq will deteriorate further.

“There’s no reason to see a change in policy about Iraq. [Bush] thinks that, in twenty years, he’s going to be recognized for the leader he was – the analogy he uses is Churchill,” Hersh said. “If you read the public statements of the leadership, they’re so confident and so calm…. It’s pretty scary.”