Iraq, AfPak, beyond: the global cost of war

While the toxic phrase “war on terror” has fallen out of use, the destructive effects continue amid increases in military spending against an economic downturn, making for a recession-proof weapons industry, Paul Rogers notes: 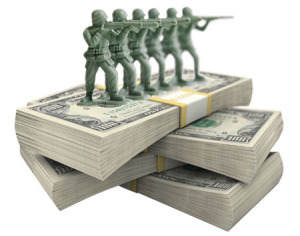 A major landmark in the in the United States’s military presence in Iraq arrives on 30 June 2009, when the army is scheduled to withdraw its combat-troops from the country’s cities. The terms of the “status-of-forces agreement” with the Iraqi government will see most of these (currently 133,000)  soldiers relocated to a number of major bases in rural areas, though some will join the 30,000 troops that have left Iraq since the peak of the “surge” in mid-2008.

The process is taking place against the background of continuing violence in Iraq, notwithstanding reports of an overall increase in security. Indeed, Iraq’s foreign minister Hoshyar Zebari is warning that al-Qaida and Ba’athist militant clusters will seek to escalate the level of violence in advance of the 30 June deadline, in order to take credit for forcing the Americans into a humiliating retreat (see Patrick Cockburn, “US troops ask Syria to thwart al-Qa’ida offensive“, Independent, 17 June 2009).

This major event in Iraq is thus surrounded by uncertainties. But it will also reverberate as far as Afghanistan. For the withdrawal of further US contingents means that there is scope for an increase in deployments there, in order to meet the commitment of 17,000 more soldiers made by President Barack Obama in February 2009; by the end of 2009, American troops should make up around two-thirds of the near-100,000 coalition forces in Afghanistan (see Barack Obama and Afghanistan: a closer look“, 8 April 2009).

Many of the fresh US forces will be sent units to Helmand and its neighbouring provinces in the south of the country, where the Taliban and other militias are most active. These parts of Afghanistan traditionally see a lull in the fighting in the late spring as the opium-poppy harvest is brought in, to be followed by a summer period of greater violence. This makes the current evolution of these militias even more interesting.

Have PKM, will travel

For at this very moment, there are signs that a number of the paramilitary groups have added considerably to their operating capacities in ways that are surprising the American and British forces. In some recent conflicts with paramilitary units in Zabul province, United States troops have been struck by the sophistication of their opponents (see Sean D Naylor, “A Stronger Enemy?”, Defense News, 8 June 2009).

These  troops are experienced in facing irregular Taliban or other groups who fight with vigour and who have intimate knowledge of the local area in which they operate, but whose equipment is fairly rudimentary. One US unit, however, found itself in combat with paramilitaries that acted more like regular forces. They were equipped with body-armour and Kevlar protective helmets, used smoke-grenades for cover and had a high level of marksmanship – including an ability to use PKM heavy machine-guns to provide accurate firepower over a range of 800 metres.

The report in Defense News says:

The insurgents’ modern gear and the relative sophistication of their tactics and marksmanship indicated that these were not local guerrillas. The use of body armour, helmets and smoke grenades is ‘fairly rare’ anywhere in Afghanistan, and ‘most likely indicates a skilled group [of]… foreign fighters with funding and previous experience [and] training’, an Army source in Afghanistan said.

The intercepted of communications between the insurgents revealed that some were speaking Farsi; itself no proof of any Iranian involvement in this trend (and US army sources claimed none), since the language extends across the region and is not confined to Iran. But there is a range of evidence to show that the conflicts in Afghanistan and Pakistan are becoming more transnational as they evolve; this includes a spreading of “expertise” whereby militants with experience in fighting (for example) the Russians in Chechnya and the United States and its coalition partners in Iraq are able to share their knowledge in new environments.

The axis of expertise

The insurgents are not alone. The United States is investing many of its far vaster resources into re-equipping its army and marine corps for wars which are radically different from those envisaged in the cold-war era – and even from those anticipated in the early stages of the Afghanistan and Iraq invasions. Many of the new requirements derive from what are termed “operational needs statements” (ONS) – that is, calls from military commanders in the field for new weapons to counter the insurgents.

A recent ONS, for example, requested fast-tracking for “a precision-guided mortar program to help light infantry units…” (see Kris Osborn & Barbara Opall-Rome, “U.S. Speeds Precision Mortar Capability for Afghanistan”, Defense News, 8 June 2009). One candidate for the provision of this system is the result of a partnership between Israeli Military Industries (IMI) and the US company, Raytheon. IMI had begun to develop the project after the war in Lebanon in July-August 2006 war; the US army’s engagement in Afghanistan led the company to accelerate it by working with Raytheon. The transfer of  Israel’s expertise in trying to counter well-trained and well-armed Hizbollah paramilitaries could, it is thought, be very valuable in the US combat with the Taliban (and especially in limiting casualties on its own side).

The link has deeper strategic dimensions too. The US -Israel military relationship has developed over many years, but has become much more salient since 9/11 and the subsequent wars in Afghanistan and Iraq (see Between Fallujah and Palestine“, 22 April 2004). The “trans nationalism” of one side is thus echoed on the other.

If precision-guided mortars represent one outcome of the drive to develop new generations of counterinsurgency weapons, the experimental 25mm air-burst projectile is another. In technical terms, this is somewhere between a standard rifle-bullet (a direct fire weapon) and a traditional 40mm grenade (indirect and therefore more liable to be indiscriminate in its effects). What is now being developed is a direct-fire exploding projectile that is accurate over a range of 700 metres and delivers high-velocity shrapnel fragments directly over insurgents that are otherwise under cover.

These are but two of many examples of new weapons under development. But they are overshadowed by the biggest development of them all – the rapid development of what is termed “the autonomous future” of pilotless drones possessed of heavy firepower, long range and endurance (with flights lasting scores of hours). The Afghan war has done much to stimulate massive investment in these systems; while the spillover of this war into western Pakistan has been followed by their greater deployment across the border in operations that have also inflicted many civilian casualties. The effect of the ensuing protest and controversy has reached the highest military levels; but the larger point in this context is that the military development of drones is still in its very early stages (see “Drone wars“, 16 April 2009).

The concentrated investment in these new instruments of combat – in response to wars in Afghanistan and Iraq where a few thousand insurgents have been able to tie down over 200,000 western troops – are part of the more general trends in world military spending over the (almost) eight years of the 2war on terror (see Jorn Madslien, Military spending sets new record, BBC News, 8 June 2009).

The latest armaments and disarmament yearbook of the respected Stockholm International Peace Research Institute (SIPRI) – Armaments, Disarmament and International Security (June 2009) – highlights a 4% real-term increase in world military spending in 2007 -08, and a 45% real-term increase in the 1998-2008 period. The US’s own expenditure increased by 58% over this decade, in great part due to spending on the wars it has been engaged in since 11 September 2001 (see America‘s politics of defence“, 12 March 2009).

Indeed, it is striking that defence industries are being largely shielded from the global financial crisis that is affecting almost everyone else. Frida Berrigan, an arms and security expert at the New America Foundation, comments: “The only winners from increases in global military spending are [US-based] weapons manufacturers like Lockheed Martin, Raytheon and Northrop Grumman”. Almost every other sector of the economy is affected by the recession, but “thanks to the fact that nations around the world are putting more and more of their precious (and ever more scarce) resources into the coffers of their militaries, the weapons industry continues to report regular profit” (see Thalif Deen, U.N. Big Powers World’s Top Military Spenders, IPS/Terra Viva, 9 June 2009).

The “war on terror” has had huge impacts on a small number of key countries, and reverberating effects in many more: the destruction of lives, mass displacements, spreading insecurity and polarisation, and the corruption of states by their involvement in torture (see Jan Egeland & Mariano Aguirre, “Torture: America’s policy, Europe’s shame“, 17 June 2009). The toxic phrase itself may have been dropped from the United States’s political-military lexicon, but the commitment to ever-increasing international military spending that it has fuelled remains rampant. This would be notable at any time, but the context of a severe economic downturn makes it look even more like a massive diversion of resources away from the world’s poorest people at the very time they most need support.

Paul Rogers is professor in the department of peace studies at Bradford University, northern England. He has been writing a weekly column on global security on openDemocracy since 26 September 2001

This entry was posted on 21 June, 2009 by Ann in Military spending, Military-Industrial Complex, Weapons and tagged Paul Rogers.