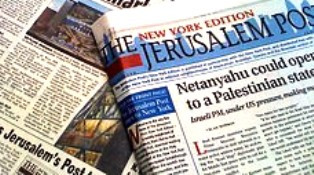 It seems lots of freebies come as newspaper inserts these days, some innocuous like posters and memorabilia and music cds, others far more dangerous like the ‘terror’ dvd distributed in millions of copies of newspapers last year. Not quite on a par with the  Clarion Fund’s smear-job film ‘Obsession‘ yet decidedly inappropriate is the news that the Jerusalem Post (New York edition) will now come as a free insert in thousands of copies of the tabloid New York Post.

If the extremist Obsession film represents the actions of pro-israel partisans, what is this free insert of the Jerusalem Post but much the same thing? And should this experiment in having New Yorkers imbibe the extremist Likudist strain of zionism be successful, it is intimated that a greater print run may be planned. Meanwhile, Al Jazeera continues to be blocked by most providers in the ‘land of the free’. Michael Miller, cited below, boasts that “Now New Yorkers, Jews and non-Jews alike, can tangibly hold a piece of Israel in their hands every Sunday.” I’m sorry, Mr Miller, I would not care to have blood and barbed wire on my hands.

[…] Among Jewish leaders, John Ruskay, Executive Vice President & CEO of the UJA-Federation of New York, said that the paper “adds a unique voice to our vibrant and uniquely diverse community, one that shares an abiding commitment with the people of Israel.”

“Having ready access to information about politics, culture and life in our Jewish homeland can only strengthen our relationship,” added Alan Solow, Chairman of the Conference of Presidents of Major American Jewish Organizations.

Abraham Foxman, National Director of the Anti-Defamation League, called the new paper “a must-read for the New York Jewish community and friends of Israel.”

“Now New Yorkers, Jews and non-Jews alike, can tangibly hold a piece of Israel in their hands every Sunday,” wrote Michael Miller, Executive Vice President and CEO of the Jewish Community Relations Council of New York.

And Yael Katsman, Director of Marketing and Communications for Nefesh B’Nefesh, said it welcomed “the opportunity to reach out to local New Yorkers and keep them informed of aliya-related events and developments.”

7 comments on “Extra! Extra! Hasbara inserts in US newspapers”

This entry was posted on 16 June, 2009 by Ann in Israel, Media, Zionism and tagged Jerusalem Post, New York Post.