Downsizing cities: ‘US cities may have to be bulldozed in order to survive’ 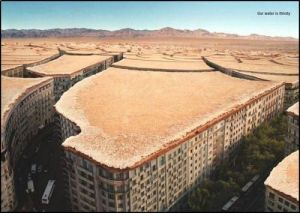 In Meltdown Geography, Richard Florida examined how cities in the US and regions across the world would be affected by financial meltdown.  While some urban centres would thrive and grow, others have entered or will enter into decline, particularly in the rustbelt cities whose manufacturing sectors have shrunk. Reporting and reflecting upon the experience of Flint Michigan, Tom Leonard has a good companion piece to Florida’s study, detailing how large portions of the city are contracting in order to become more viable. One of the upsides is that areas will be ‘greened’, with the possibility of greater urban sustainability enacted.

Dozens of US cities may have entire neighbourhoods bulldozed as part of drastic “shrink to survive” proposals being considered by the Obama administration to tackle economic decline.

The government looking at expanding a pioneering scheme in Flint, one of the poorest US cities, which involves razing entire districts and returning the land to nature.

Local politicians believe the city must contract by as much as 40 per cent, concentrating the dwindling population and local services into a more viable area.

The radical experiment is the brainchild of Dan Kildee, treasurer of Genesee County, which includes Flint.

Having outlined his strategy to Barack Obama during the election campaign, Mr Kildee has now been approached by the US government and a group of charities who want him to apply what he has learnt to the rest of the country.

Mr Kildee said he will concentrate on 50 cities, identified in a recent study by the Brookings Institution, an influential Washington think-tank, as potentially needing to shrink substantially to cope with their declining fortunes.

Most are former industrial cities in the “rust belt” of America’s Mid-West and North East. They include Detroit, Philadelphia, Pittsburgh, Baltimore and Memphis.

In Detroit, shattered by the woes of the US car industry, there are already plans to split it into a collection of small urban centres separated from each other by countryside.

“The real question is not whether these cities shrink – we’re all shrinking – but whether we let it happen in a destructive or sustainable way,” said Mr Kildee. “Decline is a fact of life in Flint. Resisting it is like resisting gravity.”

Karina Pallagst, director of the Shrinking Cities in a Global Perspective programme at the University of California, Berkeley, said there was “both a cultural and political taboo” about admitting decline in America.

“Places like Flint have hit rock bottom. They’re at the point where it’s better to start knocking a lot of buildings down,” she said.

Flint, sixty miles north of Detroit, was the original home of General Motors. The car giant once employed 79,000 local people but that figure has shrunk to around 8,000.

Unemployment is now approaching 20 per cent and the total population has almost halved to 110,000.

The exodus – particularly of young people – coupled with the consequent collapse in property prices, has left street after street in sections of the city almost entirely abandoned.

In the city centre, the once grand Durant Hotel – named after William Durant, GM’s founder – is a symbol of the city’s decline, said Mr Kildee. The large building has been empty since 1973, roughly when Flint’s decline began.

Regarded as a model city in the motor industry’s boom years, Flint may once again be emulated, though for very different reasons.

But Mr Kildee, who has lived there nearly all his life, said he had first to overcome a deeply ingrained American cultural mindset that “big is good” and that cities should sprawl – Flint covers 34 square miles.

He said: “The obsession with growth is sadly a very American thing. Across the US, there’s an assumption that all development is good, that if communities are growing they are successful. If they’re shrinking, they’re failing.”

But some Flint dustcarts are collecting just one rubbish bag a week, roads are decaying, police are very understaffed and there were simply too few people to pay for services, he said.

If the city didn’t downsize it will eventually go bankrupt, he added.

Flint’s recovery efforts have been helped by a new state law passed a few years ago which allowed local governments to buy up empty properties very cheaply.

They could then knock them down or sell them on to owners who will occupy them. The city wants to specialise in health and education services, both areas which cannot easily be relocated abroad.

The local authority has restored the city’s attractive but formerly deserted centre but has pulled down 1,100 abandoned homes in outlying areas.

Mr Kildee estimated another 3,000 needed to be demolished, although the city boundaries will remain the same.

Already, some streets peter out into woods or meadows, no trace remaining of the homes that once stood there.

Choosing which areas to knock down will be delicate but many of them were already obvious, he said.

The city is buying up houses in more affluent areas to offer people in neighbourhoods it wants to demolish. Nobody will be forced to move, said Mr Kildee.

“Much of the land will be given back to nature. People will enjoy living near a forest or meadow,” he said.

Mr Kildee acknowledged that some fellow Americans considered his solution “defeatist” but he insisted it was “no more defeatist than pruning an overgrown tree so it can bear fruit again”.

This entry was posted on 14 June, 2009 by Ann in Urban geography, USA and tagged Flint.