The battle here is about land… and it has always been. Last night Nicholas took us to his land or his family’s land, it’s called Al Makhror, and now lies on the other side of the checkpoint.

It’s beautiful, hilly and full of trees, the sun was setting in between the valley and the sky was blue. When you look to the left and up you can see the ugly slabs of grey concrete wall on the horizon, and when you look further up you can just about see the tree tops peering above the wall. In fact this wall separates Palestinian land on one side from Palestinian land on the other side. 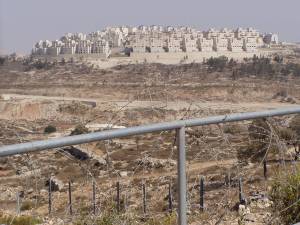 “I want to come and live here”, Nicholas said.

“It’s beautiful and it’s my land.”

Yes I agreed with him, it certainly was picturesque, you could feel the breeze at the back of your neck, see the olives trees across the landscape, a goatherd in the distance with his animals, and the sun setting in the middle of two mountains, creating a beautiful orange sky. It was quiet, in the distance to the left you could see Route 60 – the road that only Israelis could drive on.

Nicholas’ father was there, and he showed me a room that was made out of white large marbled stones, when you walked in, it was cool and dark and had a roof that spiraled up into the shape of a dome all made of stones, almost like a cave. The room was only about 4 metres in diameter and circular but they had a gas hob and a bed. Leading out onto the verandah there was a makeshift roof of corrugated metal on top, and beneath were sofas to sit on with a hole in the wall for a window but nothing more.

“We can not build here, this is our land and we can not build on it. I need permission and I know I will never get it”. Amu (uncle in Arabic) Yousef (Nicholas’ dad) answered my thoughts about why he had not finished what had been started. I looked into the sunset, not knowing how to answer.

It’s hateful how a Palestinian has to ask for permission to build on his land, which inevitably will be denied and then on that very same land a settlement will be built.

International humanitarian law prohibits the occupying power to transfer citizens from its own territory to the occupied territory (Fourth Geneva Convention, article 49). The Hague Regulations prohibit the occupying power to undertake permanent changes in the occupied area, unless these are due to military needs in the narrow sense of the term, or unless they are undertaken for the benefit of the local population.

The establishment of the settlements leads to the violation of the rights of the Palestinians as enshrined in international human rights law. Among other violations, the settlements infringe the right to self-determination, equality, property, an adequate standard of living, and freedom of movement.” (http://www.btselem.org/English/Publications/Summaries/200205_Land_Grab.asp) 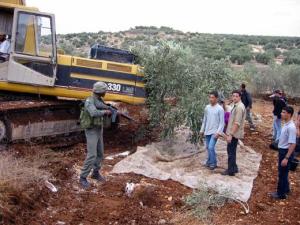 Jews of Ethiopia are also known as Falasha, or Beta Israel, the Jews of Ethiopia. More than 120 000 Ethiopian Jews have been resettled in Israel under Operation Moses (1984) and Operation Solomon (1991). They were granted this luxury under Israel’s Law of Return (1950) which allows Jews to settle in Israel and gain citizenship.

Israel states that it wants peace but with the expansion of settlements, whose houses are being sold in housing expos in London, I wonder if that will ever be possible? With settlements, comes the never ending division of territory, the separation of lives, different roads for different ethnicities, how can you expect peace when you can not live at peace with your neighbour? When two different people living on the same land can be treated so differently?

Anyways again I have to dash, I was meant to go to Nablus today, but it is under siege. This means that the IOF are shooting and creating more trouble for the Palestinians .. They have taken 4 children’s school buses, because apparently the children’s school supported Hamas. They are now shooting in a shopping mall?! I wonder where they get their information from .. perhaps they should just sit and observe and see what these buses are actually being used for. How will these children now get to school? Again an attack on society, on the right to education … perhaps I will get to go another day.

I do urge you to try and watch:

Writers on the Borders – by Samir Abdallah and José Reynes