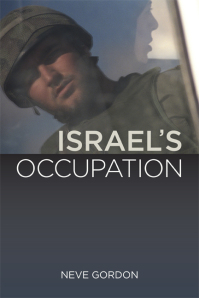 In this guest article about the struggle to protect Ni’lin, Neve Gordon serves an important reminder of the contrast in media coverage between a recent lone crazed act and the systemic violence and the daily dispossession and murder wrought by the Israeli military occupation in the Occupied Palestinian Territories.

What is especially important and newsworthy here in the West Bank border town of Ni’lin is that “scores of Jewish Israeli and international activists are standing beside the Palestinians residents as they try to stop military bulldozers from destroying Ni’lin’s land.” This solidarity in resistance defies stereotypes and would challenge media outlets to break out of their narrative mould, Gordon argues.

Neve Gordon is the author most recently of Israel’s Occupation (2008) and is currently a visiting scholar at the University of Michigan. Article submitted by the author, and also appears in The Nation. (Click here for a more extended bio.). See also appended video clips.

‘Jerusalem bulldozer ‘terrorist’ kills 3 in rampage, read the headline of a CNN article describing the recent attack of a Palestinian construction worker that left three Israelis dead and scores wounded. A Google news search indicates that the brutal assault was mentioned in 3,525 news articles. USA Today, the New York Times, the Los Angeles Times, BBC, Fox News and Al Jazeera as well as all the other major media outlets covered the incident. Lesser-known media sources, such as the Khaleej Times in the United Arab Emirates, the Edmonton Sun in Canada and B92 in Serbia, also featured the event. Indeed, one could safely assume that almost all news outlets around the globe provided some type of coverage of the attack.

Another Google news search, this one using the name Ni’lin, produces only seventy-five results. A few major outlets have carried the story about the brave resistance to Israeli seizures of land staged by the residents of this Palestinian town in the occupied West Bank, but CNN, the LA Times and USA Today have not. Sources like the Wall Street Journal and the New York Times provided a short caption, no more. Considering that over the past two months the residents of Ni’lin have managed to make a mark on the history of popular opposition, the limited coverage of their campaign is not a mere oversight.

Ni’lin’s story is one of incremental dispossession. The residents of this agrarian town lost a large portion of their land in the 1948 war. After the 1967 war, Israel took advantage of the town’s location near the internationally recognized Green Line and began confiscating its land for Jewish settlements. First, seventy-four dunams (four dunams equal one acre) were expropriated for the settlement of Shilat. Next, another 661 dunams were seized to build the settlement Mattityahu. In 1985, 934 dunams were confiscated to build Hashmonaim, and six years later 274 dunams were appropriated for Mod’in Illit. Finally, in 1998, twenty more were sequestered for the settlement of Menora. All together, more than 13 percent of the town’s land has been expropriated for settlements.

In 2002 Israel began building the separation barrier, which is illegal according to the International Court of Justice. Recently construction of the segment near Ni’lin began; if it’s completed, an additional 2,500 dunams, or about 20 percent of the land that remains in the residents’ possession, will be seized.

This time, however, the residents had had enough. In the beginning of May they launched a popular campaign to stop the dispossession, and despite the brutal attempts to suppress the uprising–which has included a curfew and shootings that have left close to 200 people injured — they are unwilling to bow down. This is no minor feat, since the annals of history suggest that it is extremely rare for a whole town to stand up as one person and practice daily acts of disobedience, particularly when confronted with such a violent response.

The events unfolding in Ni’lin also provide the perfect ingredients for a good story. During the first three days of the curfew ambulances were not allowed into the town; the body of one deceased resident was kept for four hours at Ni’lin’s entrance before the military let his family bring in the remains for burial; a woman in labor was prevented from leaving the village and was forced to deliver the baby at home; a 12-year-old boy was taken from his home by soldiers and held for two days without charges; elderly women were beaten; and three residents were seriously wounded by live ammunition.

So why do most media outlets fail to cover this ongoing campaign? The reason is straightforward: covering the struggle in Ni’lin would shatter the stereotypical perception of the Israeli-Palestinian conflict provided by mainstream news sources. Unlike the bulldozer attack, which reinforces the pervasive understanding of this conflict, the events in Ni’lin uncover a much more complex reality. This story does not involve Palestinians perpetrating terrorism against a civilian population but rather popular acts of civil disobedience that persist despite the ruthless repression of an occupying power.

Another aspect of Ni’lin that goes against existing stereotypes is that Palestinians and Jews are not fighting on different sides of this fray, but rather scores of Jewish Israeli and international activists are standing beside the Palestinians residents as they try to stop military bulldozers from destroying Ni’lin’s land. Indeed, among those injured are many Israelis.

The story of Ni’lin is, in other words, the story of a colonized people resisting colonization. This is not the way the mainstream media has been accustomed to portraying the Israeli-Palestinian conflict, and judging from the Google news results, most editors are not ready to change their approach. The historic campaign in Ni’lin–as well as many other nonviolent, mass civil disobedience campaigns against the occupation in places like Bi’lin and A’ram–is still unfit to print.

When the military realized that violence on the ground cannot stop the residents’ emancipatory drive, it began arresting both Palestinian and Israeli protesters in the hope that hefty legal costs would do the job. To support the legal expenses incurred at Ni’lin, click here.

On Sunday 25 May 2008, local villagers, estimated at well over 100 people, accompanied by international and Israeli observers, representatives of the media and human rights workers converged this morning on the village of Ni’lin, west of Ramallah, to demonstrate at the theft of yet more village land by settlers from two nearby illegal Israeli settlements.

They attempted to block the path of two bulldozers which were at work marking the new boundary of the Nili and Nala settlements. When completed the encroaching settlements and expected road closures will totally isolate the Palestinian villages of Ni’lin, Mediya, Shookba, Shabteen and Budrus. Residents will then be forced to exit and enter their villages via one strictly controlled access tunnel, making their lives even more difficult than they are today.