Work, interrupted: the fragmentation of our attention

A culture of attention deficiency and distraction? An interesting recent discussion on Late Night Live (Radio National, Australia) about how many digital technologies are contributing not only to greater distraction in our work-day, but are possibly re-wiring the way we think and operate in a more split-focus, multi-tasking, cyber-centric world and influencing our cognitive functions and conceptions of time. Cyber-centric? Now, I don’t know what that could mean … excuse me while I glance at my email, scan my RSS feeds, check text messages, recharge my mp3 player, all while I write up a chapter, listen to a podcast in the background and read some of the dozen browser tabs I have open. See also What the Internet is doing to our brains by Nicholas Carr for an interesting and provocative discussion. 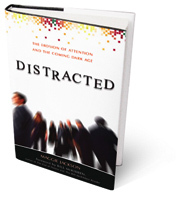 In the US a study has found that workers not only switch tasks every three minutes during their work day, but nearly half the time they interrupt themselves. Moreover, once someone’s been interrupted it can take up to 25 minutes to return to the main task. Maggie Jackson has been researching this syndrome and other ways we get distracted and has written a book about it. The premise of her book is that the way we live is eroding our capacity for deep, sustained, perceptive attention. In other words it’s attention that is the greatest casualty of our high-tech age.

Maggie Jackson is an award-winning author and journalist who writes the popular “Balancing Acts” column in the Boston Globe. Her acclaimed first book, What’s Happening to Home? Balancing Work, Life and Refuge in the Information Age, examined the loss of home as a refuge. Her newest book is Distracted: The Erosion of Attention and the Coming Dark Age.

10 comments on “Work, interrupted: the fragmentation of our attention”