You Can’t Raise A Baby With Apartheid Arms 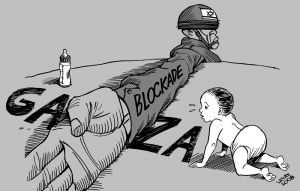 Graphic: Carlos Latuff.
The title is a play on the anti-proliferation catchcry: You can’t hug a baby in nuclear arms.

That, of course, is the idea, the result of a deliberate strategy and as a direct consequence of Israel’s prevailing self-definition and worldview. As surely as our cosmology informs our sociology, the abhorrent siege of the Gaza Ghetto continues, the result of the internal logic of Israel’s continued existence as an apartheid expansionist state, producing policies of continued ‘low-intensity’ ethnic cleansing, divide and rule and genocide as Ilan Pappe and others have described. Zaid Khan’s words are worth quoting again:

Nearly 70 years ago, in a small eastern European city, an oppressed and occupied people were under siege, living under atrocious and brutal conditions, lacking food, medicine, electricity, water, and slowly being strangled in the hope they would just disappear.

Israel’s current policies are slowly expelling Palestinians from their land and pushing those who remain into indignity, desperation and extremism. The word “siege” no longer seems adequate to describe what is being done to Gaza. The territory’s 1.5 million people have been thrust into a humanitarian catastrophe. It has become a nonsense to speak of peace negotiations while Israel creates more injustices on the ground in the West Bank and East Jerusalem.

The prerequisite for peace, justice and genuine security is clear to an increasing number of thoughtful observers such as Virginia Tilley, Ali Abunimah, Mazin Qumsiyeh and many others: Israeli abrogation of its insistence on defining itself as an (artificially and exclusively) Jewish State, instead becoming a democratic state of, for and by all of its citizens. Since most Israelis define themselves as secular, how long will they continue to be subject to the small number of extremists among the orthodox Jews? Israel also clearly does not fulfil one of its purported raison d’etre’s of being a safe haven for Jews: it cannot ever do so as it is currently conceived.

Second, a re-direction of the astronomical sums of US aid currently for Israel towards a massive re-building of Gaza would also be a better use of these funds (reparations, not state terror) and would be a master stroke of US policy in the region. Of course, that would have to get around the problem of currently the most Israeli-occupied and Likud-coopted territory of them all as Pat Buchanan noted: Capitol Hill.

The climate is very slowly changing with the efforts of people like former President Carter, the creation of alternative PACs such as J-Street (not a panacea, but a start), organisations such as Council for the National Interest (CNI), academic work such as that by Walt and Mearsheimer and the bold, courageous and persistent grassroots work of thousands of people.

Let’s keep up the pressure, as citizens of our respective countries and faith traditions. Our survival depends upon it, as well as the Palestinians. As John Pilger has noted: Gaza is a metaphor for the Middle East, and for the world.