Gaza, Gaza: Yossi Wolfson On Israel’s Warfare Against the Palestinians

Yossi Wolfson’s clear-eyed description of the hafrada regime’s policies in the siege of Gaza and the too-little mentioned exploitation of Gaza’s gas reserves: recommended read. Boldface emphasis is editorial. This article appears in the very worthwhile Challenge magazine, Issue 107, January/February 2008 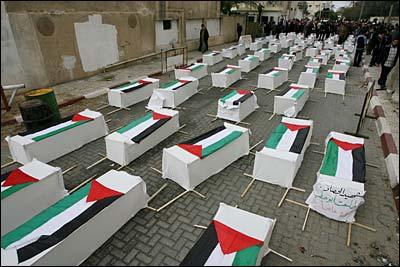 Gaza City, January 8, 2008. Empty coffins symbolize 62 patients who have died since June because Israel denied them access to medical treatment outside Gaza. Photo by Wissam Nassar

NO MORE LIES or twisted tongues. Israel is saying at last what, in the past, it always refused to acknowledge: its war is against the Palestinian population.Until now, in discussions about the separation wall, closures, blockades, house demolition, and other sorts of collective punishment, the State Attorney’s Office lacked the gumption to admit in court that the aim of such measures is to harm civilians. It always came up with convoluted security claims in order to present some vital military necessity for the sake of the War against Terror. Harm to the population was described as a regrettable side effect.

But now a Rubicon has been crossed. This happened after ten human-rights organizations petitioned the High Court on October 28, 2007 against cuts in the supply of electricity and gasoline to Gaza. The petitioners claimed that the cuts amount to collective punishment, which is forbidden under international law. The State might have answered that the cuts are a necessary military measure aimed at stopping the production of Qassam rockets. Or it might have tried some other tongue twister. But no. In their response to the petition, Dana Briskman and Gilad Shirman from the State Attorney’s Office announced openly, without blinking an eye, that the cuts’ main purpose is to exert pressure on the economy as a way of influencing Hamas.

Thus the State clamps the arteries of life for 1.5 million Gazans and describes its action as an economic war. Here it infringes a basic principle of the international laws concerning warfare, which distinguish between the civilian population and the armed forces. One main purpose of these laws is to shield civilians from the battlefield and mitigate the effects war can have on them. The lawyers for the State Attorney do not dispute this principle. Rather they would limit it to strictly military operations. Cutting the supply of electricity or gasoline is not a strictly military operation. In an economic war, they hold, the principle does not apply. Following this logic to its absurd conclusion, we find that it is forbidden to blow up a civilian installation, but it is permissible to disable it by cutting off raw materials. It is forbidden to blow up a power plant, but it’s OK to turn off the electricity.

This is not to imply that Israel abides by the law in its strictly military decisions. In summer of 2006, for example, it did blow up the Palestinian power plant in Gaza, raising the Strip’s dependence on itself for electricity—the same electricity that it today proposes to cut.

The state turns international law on its head. Various provisions regulate civilian supplies in wartime, with the aim of keeping the situation from reaching the threshold of a humanitarian crisis. Israel cites these provisions but interprets them as allowing it to harm civilians as long as it stops short of that threshold, defined by it.

What is the humanitarian threshold in Israel’s view? The blockade of Gaza has been going on at various levels for years. Since Hamas ousted Fatah there in the summer of 2007, the shipment of goods to the Strip has been restricted almost totally to basic foods, medicines, medical equipment, cooking gas, gasoline and electricity. Karni, the main checkpoint for transfer of goods, earlier functioned in a spotty manner, but today it is completely shut. The code for importing goods to Gaza has been deleted from the computers of Israel’s Customs Authority, which (according to the Paris Protocol) is supposed to collect the tariffs. The supply of fuel (except cooking gas) has been cut (without court interference). The electricity cut has not yet been implemented, but the shortage is already severe. Electricity and water are available only intermittently. Most of the industrial plants are closed for lack of raw materials and replacement parts. Hospitals, water and sewage services have been operating for the last year and a half (since Israel blew up the power plant) by means of emergency generators. Because replacement parts are lacking, the infrastructures are running down, and there is increasing danger of disaster. A harbinger was the bursting of the cesspool wall in Um al-Nassar last year, where five people drowned in a river of sewage.

According to statistics from the summer of 2007 (See the Gisha web site: “New Report: Commercial Closure“), before Israel hardened its measures, 87% of Gazans lived beneath the poverty line, which was reckoned at $2.40 per day. Already then there were perceived shortages in basic products, and food prices rose by tens of percentage points. According to figures of the World Food Program, 85% of Gazans depend on aid to purchase food.

In the view of Israel, however, the existing supply of goods is above what the law obligates it to allow, and the supplies of electricity and gasoline are even twice the minimum required. Below the humanitarian threshold as defined by it, Israel includes little more than hospitals run by generators, ambulances, supply trucks, and minimal public transport. On November 1, it repeated its assurances to the Court that its measures are carefully weighed and considered. It promised to watch the situation closely to prevent a humanitarian crisis. Yet the government had no up-to-date figures on the likely effects of an electricity cut. The Court asked for data, but the State did not provide them. Instead, it became clear that even the partial statistics cited earlier were misleading (See the Gisha web site: “Court criticizes State Attorneys…“).

Israel claims in court that it has the right to choose the countries it trades with, as if Gaza were just one independent state among the many. It views a cut in electricity to Gaza as not essentially different from, say, a cut in the sale of diamonds to Spain. This claim conceals the self-righteous notion that Israel, having disengaged, is no longer responsible for the Strip. But who presides over Gaza’s borders? Who rules its air space? Whose jets and attack helicopters are those up there? Who controls Gaza’s sea, preventing the erection of an independent harbor?

Gaza’s economic dependence on Israel is the fruit of a deliberate policy that has been in effect for decades. Here as well as in the West Bank, Israel stymied any fledgling industry that might compete with it. It developed Gaza’s dependence on it for electricity and gas. It turned the Gazans into a cheap labor force to serve Israeli industry—at first by having them commute into Israel and later by developing an industrial area at Checkpoint Erez. Israel also benefited from Gazan dependence on its products. When Karni was closed, among the loudest protestors were Israeli farmers. According to reports from the summer of 2007, about a fourth of the fruit grown in Israel was marketed in the Occupied Territories. The cut in gasoline shipments also made a dent in the income of Dor-Alon, the Israeli energy company supplying Gaza.

Yet Israel’s conceptual change about Gaza is not consistent. Disengaged or not, it can’t resist the temptation to exploit the Strip’s resources. Parallel to the discussion on cutting energy supplies, there is another petition before the High Court that also concerns energy—but here the supply would go from Gaza to Israel. In this petition, two corporate groups are battling for an Israeli license to pump natural gas from the reservoir off Gaza’s coast, a reservoir that—if Gaza belonged to a Palestinian state—would be in its territorial waters. The pumped gas is slated to become a major energy source in Israel’s economy. Did the Justices happen to recall another case they are hearing, in which the State says it no longer occupies Gaza? If so, they haven’t indicated this. Needless to say, no Justice cried in astonishment, “By what right do you intend to exploit the gas reserves of the Gaza Strip? This is against the provisions of international law, which forbid an occupying power from exploiting the natural resources of an occupied territory for its own use!”

Finally, we cannot ignore the similarities between Israel’s policies in Gaza and in Lebanon. In southern Lebanon too (if to a lesser degree), Israel for years used the population as a cheap commuting workforce and as consumers of its products, all in the framework of the so-called “Good Fence” policy. This ended, as in Gaza, in a unilateral withdrawal (May 2000). Israel’s interest in controlling the water that flows its way from southern Lebanon brings to mind its interest in Gaza’s gas reserves. Its attack on Lebanon in 2006 also has its Gazan parallels. In both places Israel learned that it has no military answer to the threat of rockets in the hands of militias. With Hezbollah as with Hamas, Israel refused to negotiate. In Lebanon too, it hesitated to open a broad ground war, and rightly so. It learned that it cannot rule a hostile area in the face of attrition from guerrillas. When it undertook military action in Lebanon, the weakness of its own armed forces became apparent. This weakness derives from the moral corruption of the military and political leadership. The war revealed an impossible combination: on the one hand, the leadership’s overall contempt for human life, and, on the other, Israeli society’s unwillingness to accept battle casualties.

In both cases, Gaza and Lebanon, Israel has made indiscriminate war from the air on civilians while hesitating to commit ground forces. In both it has sought to destroy the economic infrastructure and reduce the civilian population to primitive conditions. By harming them, it was thought, you could get them to pressure their leaders and thus make political gains. This notion proved false in Lebanon, as in Gaza. The Israeli attacks amount to an expression of weakness, but the price will not be paid by those who launch them, rather by civilians on both sides.

4 comments on “Gaza, Gaza: Yossi Wolfson On Israel’s Warfare Against the Palestinians”