Picks of 2007: William Dalrymple on East and West 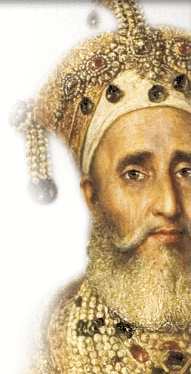 Though choosing and upholding a single piece from all of last year would be too difficult from such a fertile field of good writing, I recently revisited this short article penned by author, historian and travel writer William Dalrymple in October, ‘A lesson in humility for the smug West’, one of my picks from 2007. This piece represents one of the central themes and messages of his work, that of fruitful cross-fertilisation and interdependency between ‘civilisations.’

A list of selected articles from Dalrymple is appended.

A lesson in humility for the smug West

About 100 miles south of Delhi, where I live, lie the ruins of the Mughal capital, Fateh-pur Sikri. This was built by the Emperor Akbar at the end of the 16th century. Here Akbar would listen carefully as philosophers, mystics and holy men of different faiths debated the merits of their different beliefs in what is the earliest known experiment in formal inter-religious dialogue.

Representatives of Muslims (Sunni and Shi’ite as well as Sufi), Hindus (followers of Shiva and Vishnu as well as Hindu atheists), Christians, Jains, Jews, Buddhists and Zoroastrians came together to discuss where they differed and how they could live together.

Muslim rulers are not usually thought of in the West as standard-bearers of freedom of thought; but Akbar was obsessed with exploring the issues of religious truth, and with as open a mind as possible, declaring: “No man should be interfered with on account of religion, and anyone is to be allowed to go over to any religion that pleases him.” He also argued for what he called “the pursuit of reason” rather than “reliance on the marshy land of tradition”.

All this took place when in London, Jesuits were being hung, drawn and quartered outside Tyburn, in Spain and Portu-gal the Inquisition was torturing anyone who defied the dogmas of the Catholic church, and in Rome Giordano Bruno was being burnt at the stake in Campo de’Fiori.

It is worth emphasising Akbar, for he – the greatest ruler of the most populous of all Muslim states – represented in one man so many of the values that we in the West are often apt to claim for ourselves. I am thinking here especially of Douglas Murray, a young neocon pup, who wrote in The Spectator last week that he “was not afraid to say the West’s values are better”, and in which he accused anyone who said to the contrary of moral confusion: “Decades of intense cultural relativism and designer tribalism have made us terrified of passing judgment,” he wrote.

The article was a curtain-opener for an Intelligence Squared debate in which he and I faced each other, along with David Aaronovitch, Charlie Glass, Ibn Warraq and Tariq Ramadan, over the motion: “We should not be reluctant to assert the superiority of western values”. (The motion was eventually carried, I regret to say.)

Murray named western values as follows: the rule of law, parliamentary democracy, equality, and freedom of expression and conscience. He also argued that the Judeo-Christian tradition is the ethical source of these values.

Yet where do these ideas actually come from? Both Judaism and Christianity were not born in Washington or London, however much the Victorians liked to think of God as an Englishman. Instead they were born in Palestine, while Christianity received its intellectual superstructure in cities such as Antioch, Constantinople and Alexandria. At the Council of Nicea, where the words of the Creed were thrashed out in 325, there were more bishops from Persia and India than from western Europe.

Judaism and Christianity are every bit as much eastern religions as Islam or Buddhism. So much that we today value – universities, paper, the book, printing – were transmitted from East to West via the Islamic world, in most cases entering western Europe in the Middle Ages via Islamic Spain.

And where was the first law code drawn up? In Athens or London? Actually, no – it was the invention of Hammurabi, in ancient Iraq. Who was the first ruler to emphasise the importance of the equality of his subjects? The Buddhist Indian Emperor Ashoka in the third century BC, set down in stone basic freedoms for all his people, and did not exclude women and slaves, as Aristotle had done.

In the real world, East and West do not have separate and compartmentalised sets of values. Does a Midwestern Baptist have the same values as an urbane Richard Dawkins-read-ing atheist? Do Aung San Suu Kyi and the Dalai Lama belong to the same ethical tradition as Osama Bin Laden?

In the East as in the West there is a huge variety of ethical systems, but surprisingly similar ideals, and ideas of good and evil. To cherry-pick your favourite universal humanistic ideals, and call them western, then to imply that their opposites are somehow eastern values is simply bigoted and silly, as well as unhistorical.

The great historian of the Crusades, Sir Steven Runciman, knew better. As he wrote at the end of his three-volume history: “Our civilisation has grown . . . out of the long sequence of interaction and fusion between Orient and Occident.” He is right. The best in both eastern and western civilisation come not from asserting your own superiority, but instead from having the humility to learn from what is good in others, as well as to recognise your own past mistakes. Ramming your ideas down the throats of others is rarely a productive tactic.

There are lessons here from our own past. European history is full of monarchies, dictatorships and tyrannies, some of which – such as those of Salazar, Tito and Franco – survived into the 1970s and 1980s. The relatively recent triumph of democracy across Europe has less to do with some biologically inherent western love of freedom, than with an ability to learn humbly from the mistakes of the past – notably the millions of deaths that took place due to western ideologies such as Marxism, fas-cism and Nazism.

These movements were not freak departures from form, so much as terrible expressions of the darker side of western civilisation, including our long traditions of antisemitism at home.

Alongside this we also have history of exporting genocide abroad in the worst excesses of western colonialism – which, like the Holocaust, comes from treating the nonwestern other as untermenschen, as savage and somehow subhuman.

For though we like to ignore it, and like to think of ourselves as paragons of peace and freedom, the West has a strong militaristic tradition of attacking and invading the countries of those we think of as savages, and of wiping out the less-developed peoples of four continents as part of our civilising mission. The list of western genocides that preceded and set the scene for the Holocaust is a terrible one.

The Tasmanian Aborigines were wiped out by British hunting parties who were given licences to exterminate this “inferior race” whom the colonial authorities said should be “hunted down like wild beasts and destroyed”. Many were caught in traps, before being tortured or burnt alive.

The same fate saw us exterminate the Caribs of the Caribbean, the Guanches of the Canary Islands, as well as tribe after tribe of Native Americans. The European slave trade forcibly abducted 15m Africans and killed as many more.

It was this tradition of colonial genocide that prepared the ground for the greatest western crime of all – the industrial extermination of 6m Jews whom the Nazis looked upon as an inferior, nonwestern and semitic intrusion in the Aryan West.

For all our achievements in and emancipating women and slaves, in giving social freedoms and human rights to the individual; for all that is remarkable and beautiful in our art, literature and science, our continuing tradition of arrogantly asserting this perceived superiority has led to all that is most shameful and self-defeating in western history.

The complaints change – a hundred years ago our Victorian ancestors accused the Islamic world of being sensuous and decadent, with an overdeveloped penchant for sodomy; now Martin Amis attacks it for what he believes is its mass sexual frustration and homophobia. Only the sense of superiority remains the same. If the East does not share our particular sensibility at any given moment of history it is invariably told that it is wrong and we are right.

Tragically, this western tradition of failing to respect other cultures and treating the other as untermenschen has not completely died. We might now recognise that genocide is wrong, yet 30 years after the debacle of Vietnam and Cambodia and My Lai, the cadaver of western colonialism has yet again emerged shuddering from its shallow grave. One only has to think of the massacres of Iraqi civilians in in Falluja or the disgusting treatment meted out to the prisoners of Abu Ghraib to see how the cultural assertiveness of the neocons has brought these traditions of treating Arabs as subhuman back from the dead.

Yet the briefest look at the foreign policy of the Bush administration surely gives a textbook example of the futility of trying to impose your values and ideas – even one so noble as democracy – on another people down the barrel of a gun, rather than through example and dialogue.

In Iraq itself, we have succeeded in destroying a formerly prosperous and secular country, and creating the largest refugee problem in the modern Middle East: 4m Iraqis have now been forced abroad.

Elsewhere in the Middle East, the US attempt to push democracy in the region has succeeded in turning Muslim opinion against its old client proxies – by and large corrupt, decadent monarchies and decaying nationalist parties. But rather than turning to liberal secular parties, as the neocons assumed they would, Muslims have everywhere lined up behind those parties that have most clearly been seen to stand up against aggressive US intervention in the region, namely the religious parties of political Islam.

Last week, the Islamic world showed us the sort of gesture that is needed at this time. In a letter addressed to Pope Benedict and other Christian leaders, 138 prominent Muslim scholars from every sect of Islam urged Christian leaders “to come together with us on the common essentials of our two religions.” It will be interesting to see if any western leaders now reciprocate.

We have much to be proud of in the West; but it is in the arrogant and forceful assertion of the superiority of western values that we have consistently undermined not only all that is most precious in our civilisation, but also our own foreign policies and standing in the world. Another value, much admired in both East and West, might be a simple solution here: a little old-fashioned humility.

William Dalrymple’s new book, The Last Mughal: The Fall of a Dynasty, Delhi 1857, published by Bloomsbury, has just been awarded the Duff Cooper Prize for history

6 comments on “Picks of 2007: William Dalrymple on East and West”