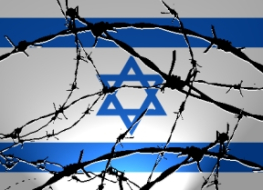 I’ve just noticed this Naomi Klein piece, published in the Guardian last Saturday (16 June): How war was turned into a brand.

It adds another dimension to the burgeoning ‘Homeland Security’-industry war profiteering (aka the Fatherland Protection Racket and the Counter-terrorism-Industrial Complex) we have seen in the United States since September 11, 2001 and since the invasion of Iraq.

In Israel, unlike the US, the high-tech homeland ‘security’ industry is tried and tested on apartheid checkpoints and on the Palestinian people.

This industry is another reason for neocons to contrive and stoke the fires of fear to prolong profit, and to increase the matrix of control. Guarding against the influence of this complex, to invoke Eisenhower’s famous injunction, starts with educating ourselves.

“Preventive war was an invention of Hitler. Frankly, I would not even listen to anyone seriously that came and talked about such a thing.”

On to Naomi Klein:

Political chaos means Israel is booming like it’s 1999 – and the boom is in defence exports field-tested on Palestinians.

Gaza in the hands of Hamas, with masked militants sitting in the president’s chair; the West Bank on the edge; Israeli army camps hastily assembled in the Golan Heights; a spy satellite over Iran and Syria; war with Hizbullah a hair trigger away; a scandal-plagued political class facing a total loss of public faith. At a glance, things aren’t going well for Israel. But here’s a puzzle: why, in the midst of such chaos and carnage, is the Israeli economy booming like it’s 1999, with a roaring stock market and growth rates nearing China’s?

…Israel’s economy isn’t booming despite the political chaos that devours the headlines but because of it. This phase of development dates back to the mid-90s, when the country was in the vanguard of the information revolution – the most tech-dependent economy in the world. After the dotcom bubble burst in 2000, Israel’s economy was devastated, facing its worst year since 1953. Then came 9/11, and suddenly new profit vistas opened up for any company that claimed it could spot terrorists in crowds, seal borders from attack, and extract confessions from closed-mouthed prisoners.

Within three years, large parts of Israel’s tech economy had been radically repurposed. Put in Friedmanesque terms, Israel went from inventing the networking tools of the “flat world” to selling fences to an apartheid planet. Many of the country’s most successful entrepreneurs are using Israel’s status as a fortressed state, surrounded by furious enemies, as a kind of 24-hour-a-day showroom, a living example of how to enjoy relative safety amid constant war. And the reason Israel is now enjoying supergrowth is that those companies are busily exporting that model to the world.

Discussions of Israel’s military trade usually focus on the flow of weapons into the country – US-made Caterpillar bulldozers used to destroy homes in the West Bank, and British companies supplying parts for F-16s. Overlooked is Israel’s huge and expanding export business. Israel now sends $1.2bn in “defence” products to the United States – up dramatically from $270m in 1999. In 2006, Israel exported $3.4bn in defence products – well over a billion more than it received in American military aid. That makes Israel the fourth largest arms dealer in the world, overtaking Britain.

Much of this growth has been in the so-called homeland security sector. Before 9/11 homeland security barely existed as an industry. By the end of this year, Israeli exports in the sector will reach $1.2bn, an increase of 20%. The key products and services are hi-tech fences, unmanned drones, biometric IDs, video and audio surveillance gear, air passenger profiling and prisoner interrogation systems – precisely the tools and technologies Israel has used to lock in the occupied territories.

And that is why the chaos in Gaza and the rest of the region doesn’t threaten the bottom line in Tel Aviv, and may actually boost it. Israel has learned to turn endless war into a brand asset, pitching its uprooting, occupation and containment of the Palestinian people as a half-century head start in the “global war on terror”.

… Thirty homeland security companies have been launched in Israel during the past six months alone, thanks in large part to lavish government subsidies that have transformed the Israeli army and the country’s universities into incubators for security and weapons start-ups – something to keep in mind in the debates about the academic boycott.

Next week, the most established of these companies will travel to Europe for the Paris Air Show, the arms industry’s equivalent of Fashion Week. One of the Israeli companies exhibiting is Suspect Detection Systems (SDS), which will be showcasing its Cogito1002, a white, sci-fi-looking security kiosk that asks air travellers to answer a series of computer-generated questions, tailored to their country of origin, while they hold their hand on a “biofeedback” sensor. The device reads the body’s reactions to the questions, and certain responses flag the passenger as “suspect”.

Like hundreds of other Israeli security start-ups, SDS boasts that it was founded by veterans of Israel’s secret police and that its products were road-tested on Palestinians. Not only has the company tried out the biofeedback terminals at a West Bank checkpoint, it claims the “concept is supported and enhanced by knowledge acquired and assimilated from the analysis of thousands of case studies related to suicide bombers in Israel”.

Another star of the Paris Air Show will be Israeli defence giant Elbit, which plans to showcase its Hermes 450 and 900 unmanned air vehicles. As recently as last month, according to press reports, Israel used the drones on bombing missions in Gaza. Once tested in the territories, they are exported abroad: the Hermes has already been used at the Arizona-Mexico border; Cogito1002 terminals are being auditioned at an unnamed American airport; and Elbit – also one of the companies behind Israel’s “security barrier” – has set up a deal with Boeing to construct the Department of Homeland Security’s $2.5bn “virtual” border fence around the US.

Since Israel began its policy of sealing off the occupied territories with checkpoints and walls, human rights activists have often compared Gaza and the West Bank to open-air prisons. But in researching the explosion of Israel’s homeland security sector, a topic explored in greater detail in my forthcoming book, it strikes me that they are something else too: laboratories where the terrifying tools of our security states are being field-tested. Palestinians – whether living in the West Bank or what the Israeli politicians are already calling Hamastan – are no longer just targets. They are guinea pigs.

Naomi Klein’s new book, The Shock Doctrine: The Rise of Disaster Capitalism, will be published later this year by Picador; a version of this article appears in the Nation, http://www.thenation.com and http://www.nologo.org.

14 comments on “Exporting Apartheid: Israel’s war turned into a brand”