To bee or not to bee II 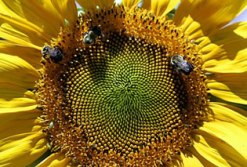 Following on from To bee or not to bee: our survival depends upon it, here is another article I happened upon that highlights the alarming issue of the mysterious depopulation of bees. Unlike the first article which hypothesised GM crops as the culprit, this one broaches other causal explanations, such as mobile phone masts.

The significance of this issue is that it has the potential to affect up to a third of our world food supply. Well worth a read.

HONEY bees are suffering major declines in countries around the world in a mystery which threatens the future of ecosystems which are crucial to farming.

The unexplained reduction in numbers, which some beekeepers blame on emissions from mobile-phone masts, is bad news for agriculture because of bees’ role in pollination.

Experts say thousands have vanished in Scotland, and there are reports of the mysterious disappearance of entire hives in countries including the United States, Spain, Italy, Poland, Greece, Portugal and France.

US beekeepers now lose about 25 per cent of their bees each winter, compared to just 5-10 per cent 35 years ago.

Nigel Hurst, the editor of the Scottish Beekeeper magazine, said: “One or two people here have lost colonies. More and more, we are hearing about unexplained losses. “A good one-third of the food we eat is affected in some way by the bee population. The quote that’s normally given is from Einstein, who said, ‘If all the honey bees were wiped out, mankind would follow in about four years’.”

Beekeepers across the UK have found hives deserted by bee colonies, even though there is no obvious reason, such as disease.

Mr Hurst said: “There’s all kinds of guesswork going on – a lot of money is being spent in America to try and find out exactly what the problem is.”

Janice Furness, the secretary of the Fife branch of the Scottish Beekeepers’ Association, said: “We have had some cases – we’ve been calling it the Mary Celeste syndrome. A hive seems fine, then the next week it is empty and there are no more dead bees inside than you would normally expect. They have left behind developing broods and eggs. It is totally against all their instincts to do that.”

Ms Furness said bees sometimes left their hives in the autumn and moved elsewhere, but that mass abandonments early in the year were extremely unusual.

She added: “If they do something like this in February, there’s no chance of setting up a new colony – it’s mass suicide.”

She said one beekeeper in her area had lost 12 out of 15 hives for no apparent reason.

Ms Furness added: “One of my beekeeping friends is convinced it has something to do with telephone masts. Bees are very sensitive to radiation from these things.”

Ms Furness added that the government needed to put more money into research.

She said: “I don’t think that they realise how important bees are. About 80 per cent of pollination is through honey bees. If anything affects that, it could be very serious.”

In Spain, thousands of colonies are said to have been lost, and up to 40 per cent of Swiss bees are reported to have disappeared or died. Heavy losses have also been confirmed in Portugal, Italy and Greece.

A spokeswoman for agriculture ministry DEFRA said it was aware of situations in the US and that its own National Bee Unit was in touch with experts around the world to share in research in an effort to prevent a major problem in the UK.

A spokeswoman for the Executive added: “We would be more than happy to meet the Beekeepers’ Association if they think there is information to share.”

ENVIRONMENT HIT BY DROP IN NUMBERS

HONEY bees are the primary pollinating insect in large parts of the world, including Britain and North America.

Pollination is critical to successful commercial orchard and field-crop production, endangered species protection, urban gardening, ecological restoration, and forage production for the dairy and beef industries. Growers of apples, almonds, cherries, cucumbers and many other crops depend on bee pollinators, managed and wild, to produce fertile seeds and full-bodied fruit.

The depopulation of bees could have a huge impact on the environment, which is reliant on the insects for pollination. If taken to the extreme, crops, fodder – and therefore livestock – could die off if there are no pollinating insects left.

The economic value of crops grown commercially in the UK that benefit from bee pollination is estimated at around £120-£200 million annually. The value of honey production in the UK ranges from £10-£30 million a year.