The Search for the ‘God Particle’ 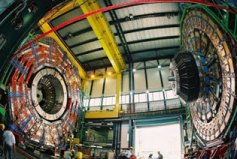 Away from political passions, I have an avid armchair interest in cosmology and was interested to read in today’s Scotsman that CERN’s particle accelerator is weeks away from being ready to be switched on.

Named Atlas, the world’s largest particle accelerator has taken 25 years and well over a billion dollars, probably two (£1.5 billion), to build. And in terms of brain power, half of the world’s particle physicists work at CERN, which is just outside Geneva.

What will this mammoth machine, 150 feet long, 82 feet high and weighing 7000 tonnes, do? It will search for the world’s smallest particle or the Higgs boson, dubbed the ‘God Particle’, and in so doing endeavour to investigate some of nature’s deepest cosmological secrets: Why is the universe expanding? What are the universe’s building blocks? What is dark matter and why is it so important?

This is important to provide some empirical basis for what is still essentially a hypothetical concept: the God Particle is as yet only predicted to exist, though there has been some indirect evidence to support it.

The thorough testing and re-testing of all Atlas’s parts will go on for a few months yet. Once operational it will fire two beams of proton particles in opposite directions around a 17-mile ring about 300 feet under the earth’s surface.

As reported by Eben Harrell, this is what is expected to happen once the machine is switched on and the beams fired:

Travelling in a vacuum, the beams will approach the speed of light, making 11,245 circuits a second. Their acceleration will require roughly the energy that it takes to power Geneva.

Then the particles in the beams will collide, and Atlas will strain to detect the fallout. Each collision will cause an explosion similar to the Big Bang, and turn the particle accelerator into a sort of time machine, creating conditions almost identical to those experienced less than a second after the universe came into being.

Heady stuff and grand claims. The search for the elusive Higgs boson or God Particle is significant because physicists think that it gives everything in the universe its mass and weight:

But there’s a problem. Since the 1960s, when Prof Higgs first theorised about the particle … all efforts to detect it have failed. Indeed, the reason for this massive machine is that, in many areas of particle physics, scientists seem to have reached the limitation of theory.

They need evidence. Something to break the impasse … Unless, of course, it comes in the brain of a once-in-a-generation genius: no one thought Newton could be revised until Einstein began dreaming at the Bern patent office.

Get these physicists talking about their work, and they will tell you there are two types of theories: elegant and messy. Almost all believe the universe conforms to the former. Every major breakthrough in physics so far has shown the universe to be ordered and elegant; the more we get to know it, the more the universe seems to always choose a garment that is a perfect fit.

The problem is that what physicists call the Standard Model – the closest they have to a theory of everything, which incorporates all that is known about the interaction of sub-atomic particles – is becoming increasingly awkward, messy.

It has holes. Some can be plugged elegantly. By explaining how particles get mass, the Higgs boson does just that. But other problems have no easy solutions. For one, the universe is expanding faster and faster despite all the gravitational forces that should be reining it in and slowing it down. No-one knows why. What’s more, spiral galaxies like our own Milky Way are spinning so fast they should spin out of control and scatter their contents across the cosmos. But something seems to be keeping them intact. No one knows what.

For the moment, scientists have called these unknowns “dark energy” and “dark matter”, respectively. … Dark energy and dark matter are vital to the survival and function of the cosmos; in fact, they are more important than matter – dark matter and dark energy make up 94 per cent of the universe.

Read the article in full here

3 comments on “The Search for the ‘God Particle’”

This entry was posted on 14 April, 2007 by Ann in Astronomy, Cosmology, Science, Weird Science.