A Man Without A Country: Vale Mr Vonnegut

American novelist Kurt Vonnegut has passed on, may he rest in peace.

In an extract from his 2005 memoirs below, he voices his disenchantment and pessimism at the state of America and the world.

Speaking at at Ohio State University only last month, he reportedly quipped that one difference between Bush and Hitler “is that Hitler was elected.”

***You may also be interested in Monte Asbury’s A tale for every American and Doug Stych’s Kurt Vonnegut, RIP

Other recent notable observations from this literary luminary: * Here’s what I think the truth is: We are all addicts of fossil fuels in a state of denial. And like so many addicts about to face cold turkey, our leaders are now committing violent crimes to get what little is left of what we’re hooked on.

* I myself feel that our country, for whose Constitution I fought in a just war, might as well have been invaded by Martians and body snatchers. Sometimes I wish it had been. What has happened instead is that it was taken over by means of the sleaziest, low-comedy, Keystone Cops-style coup d’etat imaginable.

*I know of very few people who are dreaming of a world for their grandchildren.

* How do humanists feel about Jesus? I say of Jesus, as all humanists do, ‘If what he said is good, and so much of it is absolutely beautiful, what does it matter if he was God or not?’ But if Christ hadn’t delivered the Sermon on the Mount, with its message of mercy and pity, I wouldn’t want to be a human being. I’d just as soon be a rattlesnake.

Extract from his memoirs A Man Without a Country: A Memoir of Life in George W Bush’s America (via ICH, 17 June 2006) 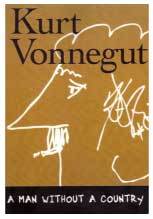 “Do unto others what you would have them do unto you.” A lot of people think Jesus said that, because it is so much the sort of thing Jesus liked to say. But it was actually said by Confucius, a Chinese philosopher, five hundred years before there was that greatest and most humane of human beings, named Jesus Christ.

The Chinese also gave us, via Marco Polo, pasta and the formula for gunpowder. The Chinese were so dumb they only used gunpowder for fireworks. And everybody was so dumb back then that nobody in either hemisphere even knew that there was another one.

We’ve sure come a long way since then. Sometimes I wish we hadn’t. I hate H-bombs and the Jerry Springer Show.

But back to people like Confucius and Jesus and my son the doctor, Mark, each of whom have said in their own way how we could behave more humanely and maybe make the world a less painful place. One of my favourite humans is Eugene Debs, from Terre Haute in my native state of Indiana.

Get a load of this. Eugene Debs, who died back in 1926, when I was not yet four, ran five times as the Socialist party candidate for president, winning 900,000 votes, almost 6 percent of the popular vote, in 1912, if you can imagine such a ballot. He had this to say while campaigning:

“As long as there is a lower class, I am in it.

“As long as there is a criminal element, I am of it.

“As long as there is a soul in prison, I am not free.”

Doesn’t anything socialistic make you want to throw up? Like great public schools, or health insurance for all?

How about Jesus’ Sermon on the Mount, the Beatitudes?

Blessed are the meek, for they shall inherit the Earth.

Blessed are the merciful, for they shall obtain mercy.

Blessed are the peacemakers, for they shall be called the children of God.

It so happens that idealism enough for anyone is not made of perfumed pink clouds. It is the law! It is the US Constitution.

But I myself feel that our country, for whose Constitution I fought in a just war, might as well have been invaded by Martians and body snatchers. Sometimes I wish it had been. What has happened instead is that it was taken over by means of the sleaziest, low-comedy, Keystone Cops-style coup d’état imaginable.

I was once asked if I had any ideas for a really scary reality TV show. I have one reality show that would really make your hair stand on end: “C-Students from Yale”.

George W Bush has gathered around him upper-crust C-students who know no history or geography, plus not-so-closeted white supremacists, aka Christians, and plus, most frighteningly, psychopathic personalities, or PPs, the medical term for smart, personable people who have no consciences.

To say somebody is a PP is to make a perfectly respectable diagnosis, like saying he or she has appendicitis or athlete’s foot. The classic medical text on PPs is The Mask of Sanity by Dr Hervey Cleckley, a clinical professor of psychiatry at the Medical College of Georgia, published in 1941. Read it!

Some people are born deaf, some are born blind or whatever, and this book is about congenitally defective human beings of a sort that is making this whole country and many other parts of the planet go completely haywire nowadays. These were people born without consciences, and suddenly they are taking charge of everything.

PPs are presentable, they know full well the suffering their actions may cause others, but they do not care. They cannot care because they are nuts. They have a screw loose!

And what syndrome better describes so many executives at Enron and WorldCom and on and on, who have enriched themselves while ruining their employees and investors and country and who still feel as pure as the driven snow, no matter what anybody may say to or about them? And they are waging a war that is making billionaires out of millionaires, and trillionaires out of billionaires, and they own television, and they bankroll George Bush, and not because he’s against gay marriage.

They might have felt that taking our country into an endless war was simply something decisive to do. What has allowed so many PPs to rise so high in corporations, and now in government, is that they are so decisive. They are going to do something every fuckin’ day and they are not afraid. Unlike normal people, they are never filled with doubts, for the simple reason that they don’t give a fuck what happens next. Simply can’t. Do this! Do that! Mobilise the reserves! Privatise the public schools! Attack Iraq! Cut health care! Tap everybody’s telephone! Cut taxes on the rich! Build a trillion-dollar missile shield! Fuck habeas corpus and the Sierra Club and In These Times, and kiss my ass!

There is a tragic flaw in our precious Constitution, and I don’t know what can be done to fix it. This is it: only nut cases want to be president. This was true even in high school. Only clearly disturbed people ran for class president.

The title of Michael Moore’s Fahrenheit 9/11 is a parody of the title of Ray Bradbury’s great science-fiction novel Fahrenheit 451. Four hundred and fifty-one degrees Fahrenheit is the combustion point, incidentally, of paper, of which books are composed. The hero of Bradbury’s novel is a municipal worker whose job is burning books.

While on the subject of burning books, I want to congratulate librarians, not famous for their physical strength, who, all over this country, have staunchly resisted anti-democratic bullies who have tried to remove certain books from their shelves, and destroyed records rather than have to reveal to thought police the names of persons who have checked out those titles.

And still on the subject of books: our daily news sources, newspapers and TV, are now so craven, so unvigilant on behalf of the American people, so uninformative, that only in books do we learn what’s really going on.

I will cite an example: House of Bush, House of Saud by Craig Unger, published in early 2004, that humiliating, shameful, blood-soaked year.

In case you haven’t noticed, as the result of a shamelessly rigged election in Florida, in which thousands of African-Americans were arbitrarily disenfranchised, we now present ourselves to the rest of the world as proud, grinning, jut-jawed, pitiless war-lovers with appallingly powerful weaponry – who stand unopposed.

In case you haven’t noticed, we are now as feared and hated all over the world as Nazis once were.

And with good reason.

In case you haven’t noticed, our unelected leaders have dehumanised millions and millions of human beings simply because of their religion and race. We wound ’em and kill ’em and torture ’em and imprison ’em all we want.

So I am a man without a country, except for the librarians and a Chicago paper called In These Times.

Before we attacked Iraq, the majestic New York Times guaranteed there were weapons of mass destruction there.

Albert Einstein and Mark Twain gave up on the human race at the end of their lives, even though Twain hadn’t even seen the first world war. War is now a form of TV entertainment, and what made the first world war so particularly entertaining were two American inventions, barbed wire and the machine gun.

Shrapnel was invented by an Englishman of the same name. Don’t you wish you could have something named after you?

Like my distinct betters Einstein and Twain, I now give up on people, too. I am a veteran of the second world war and I have to say this is not the first time I have surrendered to a pitiless war machine.

My last words? “Life is no way to treat an animal, not even a mouse.”

Our president is a Christian? So was Adolf Hitler. What can be said to our young people, now that psychopathic personalities, which is to say persons without consciences, without senses of pity or shame, have taken all the money in the treasuries of our government and corporations, and made it all their own?

© 2005 Kurt Vonnegut Extracted from A Man Without a Country: : A Memoir of Life in George W Bush’s America.

4 comments on “A Man Without A Country: Vale Mr Vonnegut”