Call to action! This great initiative comes from Voices for Creative Nonviolence. VCNV Co-Cordinator Jeff Leys has penned this article in Counterpunch telling us what this ‘Occupation Project‘ aims to do. 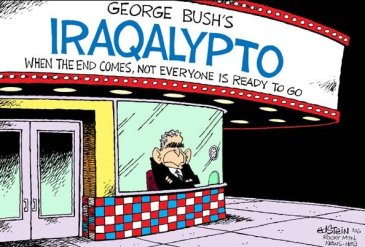 Also see this petition calling for an immediate withdrawal of coalition troops from Iraq, as seen at CSTF.

In February 5, 2003, Secretary of State Colin Powell delivered his infamous speech to the United Nations in which he set forth the deceptions about Iraq’s alleged weapons of mass destruction program. At the conclusion of his speech, no doubt remained: the U.S. invasion of Iraq was imminent.

On February 5, 2007, the Occupation Project will launch a campaign of sustained nonviolent civil disobedience focused upon Representatives and Senators who refuse to publicly pledge to vote against any additional funding for the Iraq war. The campaign will continue at least through the start of April. Let there be no doubt that the antiwar movement will use all means of nonviolence to end our country’s war in and occupation of Iraq.

Initiated by Voices for Creative Nonviolence, the campaign is growing exponentially as such national organizations as Veterans for Peace, CODEPINK, Declaration of Peace, National Campaign for Nonviolent Resistance and Global Network Against Weapons & Nuclear Power in Space join the campaign.

The premise is simple. Representatives and Senators: publicly pledge to vote against the $100 billion supplemental war spending package which President Bush will submit in early February or we will occupy your offices.

The premise is simple. This will not be a singular action on a single day. We will return again and again and again until you pledge to vote against funds for the Iraq war.

Organizing for campaigns is underway in states from Maine to Ohio to North Carolina to Iowa to Oregon. While the Occupation Project is a national campaign, it is based firmly within the reality that local organizers will understand what forms of nonviolent civil disobedience will work best in their locality, the best targets and the frequency with which actions will occur. Some will occupy offices on a weekly basis. Others every other week. Others at key times during the hearing and vote process.

Three models are emerging. In Illinois, affinity groups will engage in at least one act of civil disobedience each week over at least an eight week period of time, with the potential to extend through the end of April. In Wisconsin, a portion of the campaign will focus upon Representative David Obey, Chair of the House Appropriations Committee, with multiple actions, every other week, which include constituents from his district as well as people from outside his district (given his role as committee chair). In Iowa, the Catholic Worker movement is taking the lead, organizing the campaign as one of sustained sporadic civil disobedience-that is, a weekly vigil will be held at the federal building with at least three acts of civil disobedience planned in the power brokers offices. In Maine, organizers are building upon their long-standing campaigns which focus upon the state’s Senators.

Key time periods to act include the weeks of:

February 5, most likely the week when President Bush will submit to Congress his $100 billion supplemental spending request to fund the Iraq and Afghanistan wars and the so-called global war on terror;

February 19, when Congress is in recess and elected officials are in their home districts and states;

March 12, which most likely will be leading up to a full House vote on the war funding. In 2005 and 2006, the House voted just prior to March 16 (when they went into a week long recess).

April 2 through 13, when Congress is in recess. The House will most likely have voted on the war funding by now and so maximum pressure should be exerted upon Senators during this time.

April 16–Tax Day, with a focus upon Senators.

Through the end of April, during which the full Senate will most likely vote on the funds.

And what of the argument that it is necessary for Representatives and Senators to vote for President Bush’s war funding request in order to not place U.S. soldiers in harm’s way? Consider the following:

Procurement money rolls over from one fiscal year to the next. It does not have to be spent in the year in which it is appropriated. Indeed, in November 2006, the U.S. Government Accountability Office (GAO) reported that as of June 2006, $16.8 billion remained to be obligated by September 30, or be carried over to the current fiscal year (which began October 1).

Procurement money rolls over because, as reported by the Congressional Research Service, it takes anywhere from 1 to 3 years from the time money is appropriated to the time equipment or weapons are available and in the field. Money appropriated for procurement now is money intended to fund the war for up to three years into the future.

It is impossible to track for which purposes these O & M funds are used. According to a November 2006 GAO report, in fiscal year 2005 nearly 26 percent of the funds expended in Operation & Maintenance were categorized by the Defense Department as “other supplies and equipment” and “other services and miscellaneous contracts.”

Clearly sufficient funds are already in the pipeline for a safe and effective withdrawal of U.S. soldiers from Iraq. The Pentagon can utilize its budgetary transfer authority for any minor additional funds which might be necessary for such a withdrawal.

In what manner has the cost of Operation & Maintenance escalated so dramatically in Iraq as to justify a 37 percent increase in funding? How is it possible to justify appropriating funds to buy weapons, equipment and ammunition which won’t reach the troops in the field for at least 1 to 3 years? How long will Representatives and Senators hide behind the excuse that they have to vote for war funds in order to support the troops? Representatives and Senators. Do your Constitutional duty. Force the withdrawal of U.S. troops to the safety of their homes. Support the troops by voting against any additional war funding.

Jeff Leys is Co-Coordinator of Voices for Creative Nonviolence. You can learn more about the campaign at www.vcnv.org or via email, [email protected] or by calling 773-878-3815.