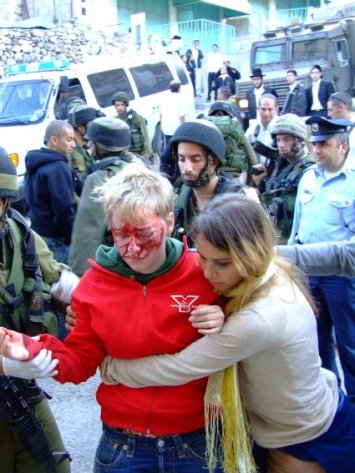 A 19-year old Swedish human rights worker had her cheekbone broken by an Israeli settler in Hebron today. Tove Johansson from Stockholm walked through the Tel Rumeida checkpoint with a small group of human rights workers to accompany Palestinian schoolchildren to their homes. They were confronted by about 100 settlers in small groups, who started chanting in Hebrew “We killed Jesus, we’ll kill you too!”, a refrain the settlers had been repeating to internationals in Tel Rumeida all day.

One settler then hit Tove on the left side of her face with an empty bottle, breaking it on her face and leaving her with a broken cheekbone. She immediately fell to the ground and the group of settlers who were watching began to clap, cheer, and chant. The soldiers, who had only watched until this point, then came forward and motioned at the settlers, in a way which the internationals described as “ok… that’s enough guys….”

The settlers, however, were allowed to stay in the area and continued watching and clapping as internationals tried to stop the flow of blood from the woman’s face. Some settlers who were coming down the hill even tried to take photos of themselves next to her bleeding face, giving the camera a “thumbs-up” sign.

At this point, an international was taken into a police van and asked to identify who had attacked the group. The international did this, pointing out three settlers who the police took into their police vehicles. However, the settlers were all driven to different areas of the neighborhood and released nearly immediately. When one settler was released on Shuhada Street, the settler crowd that was still celebrating the woman’s injuries applauded and cheered.

A settler medic came to the scene about 15 minutes after the attack and immediately began interrogating the internationals who had been attacked, about why they were in Hebron. He refused to help the bleeding woman lying on the street in any way .

Five minutes after the settler medic arrived, the army medic arrived and began treating the injured woman. When she was later put on a stretcher, the crowd of settlers again clapped and cheered.

Police officers at the scene then immediately began threatening to arrest the remaining internationals if they did not immediately leave the area, though they had also just been attacked.

The injured woman was taken to Kiryat Arba settlement and then to Hadassah Ein Keren hospital in Jerusalem.