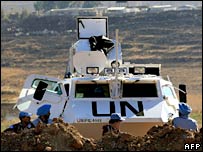 UN troops in Lebanon feel unease over the flights
Israel will continue flights over Lebanon because of a “growing effort to pass weapons into Lebanon”, the defence minister has told the cabinet.

“As long as these attempts continue, the legitimacy of our flights over Lebanon increases,” Amir Peretz said.

Last week, the head of the UN force in Lebanon suggested using force to stop the Israeli over-flights.

But French Gen Alain Pellegrini said this would require the UN to change the rules of engagement for its troops.

The UN force in Lebanon (Unifil) can only react by using diplomatic means.

“The Lebanese government is falling short of carrying out its commitment under UN Security Council Resolution 1701,” Mr Peretz said.

“Increasing intelligence indicates a growing effort to pass weapons into Lebanon,” he said.

“As long as [UN] Resolution 1701 is not carried out, we have no intention of stopping the flights over Lebanon.”

“These violations are extremely dangerous because they may be felt as hostile by forces of the coalition that could be brought to retaliate in case of self-defence and it would be a very serious incident,” Ms Alliot-Marie told reporters at United Nations headquarters.

But Mr Peretz said: “Unifil is meant to act against Hezbollah and not against Israel.”

Gen Pellegrini says France has deployed anti-aircraft missiles to Lebanon but under current rules can only use them to protect its own soldiers.

He also said Unifil had seen no evidence of illegal arms being smuggled in from Syria.

In August, a UN-brokered truce ended 34 days of fighting between Israel and Hezbollah.