Ambitions for Eretz Israel are apparently still being expressed as a matter of military planning and policy. Check out this revealing quote from the IDF’s deputy chief of staff from the new preface to Norman Finkelstein’s book, This Time We Went Too Far (I’ve embedded the DefenseNews link to the article and bold emphasis is mine):

On the same day as the [Turkish] flotilla bloodbath, DefenseNews was reporting that a prospective Israeli assault on Lebanon “would include attacks on national infrastructure, a total maritime blockade, and interdiction strikes on bridges, highways,” while “land forces would execute a ferocious land grab well beyond the Litani River.” The essence of Israeli strategic doctrine, the IDF deputy chief of staff elaborated, was that “each new round” of fighting “brings worse results than the last” to Israel’s enemies.

It’s cited by Charles Glass in Not Another War on Lebanon over at TakiMag which is worth reading. As the hafrada regime and rogue state ratchets up the war drums against Iran and pressures the US Congress to withhold military assistance to Lebanon in the wake of the border skirmish — amid its large litany of crimes in Palestine and elsewhere — does anyone reasonable out there still think it isn’t deliberately pursuing mad dog policies? While Israeli designs on southern Lebanon and the Litani have long been known, I haven’t seen a clearer current expression of the IOF openly admitting it plans a “ferocious land grab” in the event of war — even while hasbaranik reporters frame Hezbollah’s land purchases as “land grabs”. Projection, much?

Israel has decided to rattle sabers after losing one of its senior officers in the tree-trimming incident on the Lebanese border. In a story that was removed from the IDF website, it published an article about the maneuvers, reporting that the army is engaged in a major exercise all the way from the central Beit Shean region to the far north, with troops and armor rolling down Highway 71.

Haaretz is also reporting a related escalation by Israel regarding armored vehicles sent to Shebaa Farms, one of the most highly disputed pieces of territory outside Jerusalem.  The Lebanese army was placed on high alert as a result. 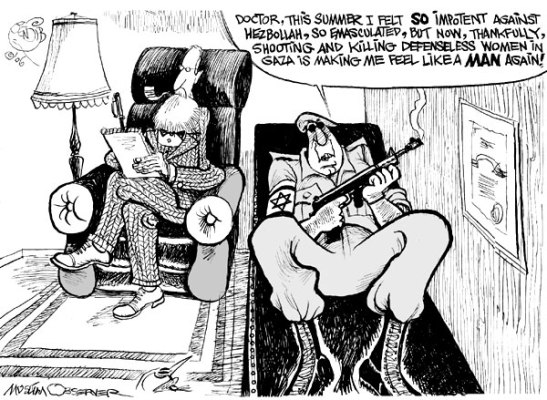 3 comments on “In Lebanon, IDF plans a ‘ferocious land grab’”

This entry was posted on 11 August, 2010 by peoplesgeography.com in Israel, Lebanon.