The Merchants of Fear: Israel’s Profiting from Homeland Insecurity 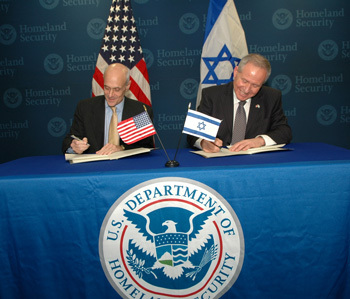 In the wake of the weird Christmas Day “underwear bomber” incident on Northwest Flight 253, former Homeland Security chief Michael Chertoff, as if on cue, was all over the mainstream media touting whole-body scanners as the answer to America’s airline security problems. Since leaving public office in 2009, Chertoff had co-founded the Chertoff Group, a security and risk-management firm whose clients include a manufacturer of body-imaging screening machines. While some in the media noted this rather commonplace conflict of interest, ignored by all was a far more significant abuse of the American public’s trust.

In a CNN interview, Chertoff cited the Detroit incident as “a very vivid lesson in the value of that machinery.” One lesson that he hasn’t drawn, however, was about the unreliability of the security firm which allowed the young Nigerian Muslim without a passport to “slip through” Amsterdam’s Schiphol Airport.

Menachem Atzmon, who holds the controlling shares in the firm, was convicted in 1996 for campaign finance fraud while co-treasurer of the Likud party. The other co-treasurer Ehud Olmert, who was acquitted of those charges, resigned as Israeli Prime Minister in 2008 amid multiple corruption charges.

Although the rapid worldwide expansion of ICTS was no doubt helped by the much vaunted reputation of Israeli aviation security, its record abroad is less reassuring. In December 2001, the so-called “shoe bomber” Richard Reid also slipped through ICTS security at Paris Charles de Gaulle Airport to board a flight to Miami. And it was an ICTS subsidiary, Huntleigh USA, that shared security duties at Boston’s Logan Airport, where two of the four hijacked planes originated on September 11, 2001.

Interestingly, Michael Chertoff has close family ties to Israeli aviation. His father, an American rabbi, married Livia Eisen, who was an air hostess for El Al in the 1950s. “There are reports that she was involved in Operation Magic Carpet, which brought Jews to Israel from Yemen,” wrote Jonathan Cook in Israel and the Clash of Civilizations. “It therefore seems possible that Livia Eisen was an Israeli national, and one with possible links to the Mossad.”

Somehow, nobody thought of asking Michael Chertoff whether his mother had ties to a foreign country’s intelligence service during the Senate confirmation hearing on his appointment as secretary of Homeland Security in 2005. Most likely taking their cue from Senators Charles Schumer and Joseph Lieberman, who endorsed their fellow Jewish Zionist for the DHS job, the AIPAC-conscious Senate approved Chertoff by a vote of 98-0.

Normally hypersensitive to even the most tenuous links to Islamic terrorism, Sens. Schumer and Lieberman were apparently unconcerned by Chertoff’s 1998 legal representation of Dr. Magdy Elamir. The FBI had filed a report charging Elamir with skimming money from an Islamic charity to support al-Qaeda and financially supporting the al-Salam mosque, which the “Blind Sheikh” Omar Abdel-Rahman used as a base of operations for the 1993 World Trade Center bombing.

But then again, how could one possibly doubt the patriotism of the author of the USA PATRIOT Act? Whatever his other qualities, Chertoff must be a fast writer. The 342-page document was signed into law on October 26, 2001 – a mere 45 days after the Sept. 11 attacks.

On October 11, 2001, exactly one month after 9/11, Senator Lieberman introduced S. 1534, a bill to establish a Department of Homeland Security. The bipartisan Department of National Homeland Security Act of 2001 was co-sponsored by Republican Senator Arlen Specter, who is, perhaps not coincidentally, also a Jewish Zionist.

The day after 9/11, Benjamin Netanyahu let slip that the deaths of almost 3,000 Americans was “very good” for Israel. In particular, the mass murder was very good for an emerging sector of the Israeli economy. In “Laboratory for a Fortressed World,” Naomi Klein detailed the post-9/11 “explosion of Israel’s homeland security sector.”

“Before 9/11 homeland security barely existed as an industry,” Klein wrote in 2007. “By the end of this year, Israeli exports in the sector will reach $1.2 billion – an increase of 20 percent. The key products and services are high-tech fences, unmanned drones, biometric IDs, video and audio surveillance gear, air passenger profiling and prisoner interrogation systems – precisely the tools and technologies Israel has used to lock in the occupied territories.”

And the Department of Homeland Security, the Lieberman-Specter brainchild then headed by Michael Chertoff, had become one of Israel’s most reliable markets.

“Israel has struck oil,” as Klein so aptly put it. “The oil is the war on terror, the state of constant fear that creates a bottomless global demand for devices that watch, listen, contain and target ‘suspects.’”

In order to exploit that resource to the full, Israel needed the likes of Chertoff, Lieberman, Schumer and Specter to hype the concept of “homeland security” in the United States. Americans, however, should have been asking a couple of pertinent questions. Which homeland? And whose security?

Maidhc Ó Cathail is a widely published writer based in Japan.