Chris Hedges is another one of the clear skeptics after Obama’s Cairo address; his sober assessment is a reminder of how grim things look from the pointy, receiving end of US foreign policy for many people. The appropriately arresting visuals come courtesy of fine American cartoonists of conscience Andy Singer, Mr Fish and Jimmy Margulies.

Did they play Barack Obama’s speech to the Muslim world in the prison corridors of Abu Ghraib, Bagram air base, Guantanamo or the dozens of secret sites where we hold thousands of Muslims around the world? Did it echo off the walls of the crowded morgues filled with the mutilated bodies of the Muslim dead in Baghdad or Kabul? Was it broadcast from the tops of minarets in the villages and towns decimated by U.S. iron fragmentation bombs? Was it heard in the squalid refugee camps of Gaza, where 1.5 million Palestinians live in the world’s largest ghetto?

What do words of peace and cooperation mean from us when we torture—yes, we still torture—only Muslims? What do these words mean when we sanction Israel’s brutal air assaults on Lebanon and Gaza, assaults that demolished thousands of homes and left hundreds dead and injured? How does it look for Obama to call for democracy and human rights from Egypt, where we lavishly fund and support the despotic regime of Hosni Mubarak, one of the longest-reigning dictators in the Middle East?

We may thrill to Obama’s rhetoric, but very few of the 1.3 billion Muslims in the world are as deluded. They grasp that nothing so far has changed for Muslims in the Middle East under the Obama administration. The wars of occupation go on or have been expanded. Israel continues to flout international law, gobbling up more Palestinian land and carrying out egregious war crimes in Gaza. Calcified, repressive regimes in countries such as Egypt and Saudi Arabia are feted in Washington as allies.

The speech at Cairo University, which usually has trucks filled with riot police outside the university gates and a heavy security presence on campus to control the student body, is an example of the facade. Student political groups, as everyone who joined in the standing ovation for the president knew, are prohibited. Faculty deans are chosen by the administration, rather than elected by professors, “as a way to combat Islamist influence on campus,” according to the U.S. State Department’s latest human rights report. And, as The Washington Post pointed out,  students who use the Internet “as an outlet for their political or social views are on notice: One Cairo University student blogger was jailed for two months last summer for ‘public agitation,’ and another was kicked out of university housing for criticizing the government.”

The expanding imperial projects and tightening screws of repression lurch forward under Obama. We are not trying to end terror or promote democracy. We are ensuring that our corporate state has a steady supply of the cheap oil to which it is addicted. And the scarcer oil becomes, the more aggressive we become. This is the game playing out in the Muslim world. 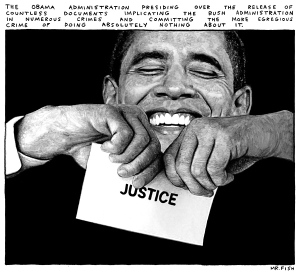 The Bush White House openly tortured. The Obama White House tortures and pretends not to. Obama may have banned waterboarding, but as Luke Mitchell points out in next month’s issue of Harper’s magazine, torture, including isolation, sleep and sensory deprivation and force-feeding, continues to be used to break detainees. The president has promised to close Guantanamo, where only 1 percent of the prisoners held offshore by the United States are kept. And the Obama administration has sought to obscure the fate and condition of thousands of Muslims held in black holes around the globe. As Mitchell notes, the Obama White House “has sought to prevent detainees at Bagram prison in Afghanistan from gaining access to courts where they may reveal the circumstances of their imprisonment. It has sought to continue the practice of rendering prisoners to unknown and unknowable locations outside the United States, and sought to keep secret many (though not all) of the records regarding our treatment of those detainees.”

Muslim rage is stoked because we station tens of thousands of American troops on Muslim soil, occupy two Muslim nations, make possible the illegal Israeli occupation of Palestine, support repressive Arab regimes and torture thousands of Muslims in offshore penal colonies where prisoners are stripped of their rights. We now have 22 times as many military personnel in the Muslim world as were deployed during the crusades in the 12th century. The rage comes because we have constructed massive military bases, some the size of small cities, in Iraq, Afghanistan, Saudi Arabia, Turkey and Kuwait, and established basing rights in the Gulf states of Bahrain, Qatar, Oman and the United Arab Emirates. The rage comes because we have expanded our military empire into neighboring Uzbekistan, Pakistan, Kyrgyzstan and Tajikistan. It comes because we station troops and special forces in Egypt, Algeria and Yemen. And this vast network of bases and military outposts looks suspiciously permanent.

The Muslim world fears, correctly, that we intend to dominate Middle East oil supplies and any Caspian Sea oil infrastructure. And it is interested not in our protestations of good will but in the elemental right of justice and freedom from foreign occupation. We would react, should the situation be reversed, no differently.

The brutal reality of expanding foreign occupation and harsher and harsher forms of control are the tinder of Islamic fundamentalism, insurgences and terrorism. We can blame the violence on a clash of civilizations. We can naively tell ourselves we are envied for our freedoms. We can point to the Koran. But these are fantasies that divert us from facing the central dispute between us and the Muslim world, from facing our own responsibility for the virus of chaos and violence spreading throughout the Middle East. We can have peace when we shut down our bases, stay the hand of the Israelis to create a Palestinian state, and go home, or we can have long, costly and ultimately futile regional war. We cannot have both.

Obama, whose embrace of American imperialism is as naive and destructive as that of George W. Bush, is the newest brand used to peddle the poison of permanent war. We may not see it. But those who bury the dead do.