Ralph Nader spoke and there were many other talented speakers.

One local news channels here in Washington estimated there were 10,000 demonstrators at the march for Gaza. It was impossible for me to tell since I was in the middle of it all. I was surrounded by so many people packed so closely that I could not perceive the edge of it. My son and I worked our way patiently to the speaker’s podium so that we could record some good pictures. It took us at least an hour to reach the podium. We shouted down-in-front to the camera crew. They parked themselves right in the middle in front of the speaker’s podium, so we only got a few brief glimpses of the speakers when the media moved. I don’t know whose media they were. 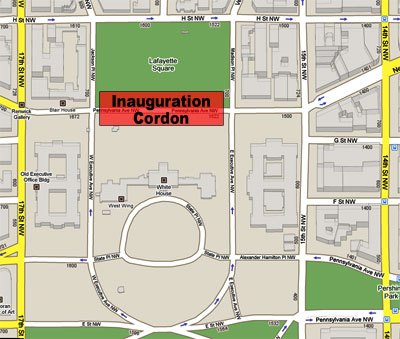 Lafayette Square was definitely filled to capacity, I know. My son had sprained his ankle playing soccer earlier this week, so we dropped out by the Bank of America when the march started, and we filmed the demonstrators as they passed by. It was raining fairly steady, so we had a lot of work to do to keep our cameras dry. Sometimes there seemed to be more photographers and video crews than demonstrators, which is a good thing.

It felt like it took approximately another 30 minutes for everyone to pass by us, and we were near the end of the march when we dropped out. Since we were close to the stage in front of the crowd, when the crowd turned around to march, we found ourselves in the rear. We had to wait for approximately half an hour for the crowd to filter out of Lafayette park because Lafayette Square had been partially fenced off to prepare for the inauguration. My son’s ankle started biting him badly so we did not go with the march all the way to the capitol.

There was a wonderful energy and enthusiasm. People were loud and forceful and listened carefully to the speaker’s list. I saw a lot of smiles and heard a lot of laughter. People enjoyed the validation that comes with shared concern and being part of something so large.

Crowd size is not a reliable barometer of public sentiment about a cause, but the media like to grab a number and hang onto it. It was a gloomy day and it began to rain just as the speakers finished up and the March begin. But spirits remained high and were glad to be there.

Someone said – it’s only rain. It is raining white phosphorous in Gaza.

I’ll post my son’s vid as soon as he gets it up on YouTube. I know it will take him a while, since video editing is computer intensive. I’ve got 600 meg of high resolution images if anyone needs any of these images for any other purpose. These are just some of the images we captured.

I enjoy history and philosophy.
View all posts by Ressentiment →

This entry was posted on 12 January, 2009 by Ressentiment in Activism, Gaza, USA and tagged Lafayette Park, Washington DC Gaza Rally.