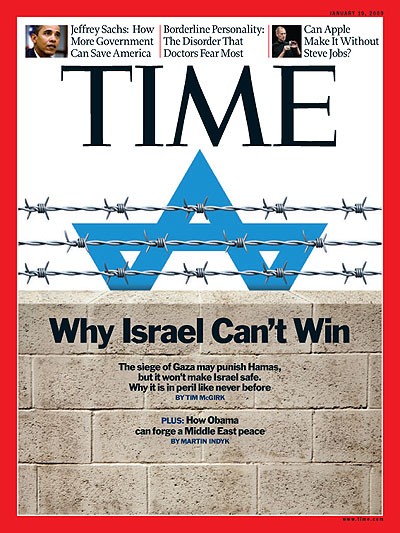 A sign of the times this week at both the eponymous TIME and the New York Times that there has been unprecedented mainstream media criticism directed at Israel’s strategic and moral disaster in Gaza, albeit overdue and amid coverage still largely tilted toward the zionist narrative.

One knows Israel’s atrocities have reached epic levels when even the Wall Street Journal features a column today by George Bisharat (Israel Is Committing War Crimes).

The NYT features op. ed. columnists who are evidently wising up to the folly and criminal immorality of Israel’s latest genocidal offensive against Gaza: in addition to Palestinian-American academic Rashid Khalidi reproduced here, the op-eds also included critical pieces from Gideon Lichfield (Fighting To Preserve A Myth) and Nicholas D. Kristof (The Gaza Boomerang).

In its current issue, TIME’s cover (right) features the headline ‘Why Israel Can’t Win’. The issue’s lead story, Tim McGuirk’s Can Israel Survive Its Assault on Gaza?, is more sanguine than the headlines might suggest; the sharpest sentence will likely be seen as the following:

Israel’s Defense Minister, Ehud Barak, has promised a “war to the bitter end.” But after 60 years of struggle to defend their existence against foreign threats and enemies within, many Israelis may be wondering, Where does that end lie? The threat posed by Hamas is only the most immediate of the many interlocking challenges facing Israel, some of which cast dark shadows over the long-term viability of a democratic Jewish state.

Further on, McGuirk asserts that apart from recognising that Hamas can not be dealt with militarily but must be engaged with diplomatically, Israel “eventually will have to pull back to the 1967 borders and dismantle many of the settlements on the Palestinian side, no matter how loudly its ultra-religious parties protest. Only then will the Palestinians and the other Arab states agree to a durable peace. It’s as simple as that.” Indeed it is, and how long has the simplicity of the resolution always always been there, yet shrouded by Israel’s ideological obfuscations and media fog facts.

Yet McGuirk also repeats the fog facts we’ve heard parroted on Iran, ” a state whose leaders have sworn to eliminate Israel”.

The longer Israel delays meaningful peace, the worse the situation will become. As a joke Gilad Atzmon cites goes:

And the Israeli realists practice swimming.

This entry was posted on 10 January, 2009 by peoplesgeography.com in Hamas, Israel, Media, Palestine and tagged New York Times, Time.